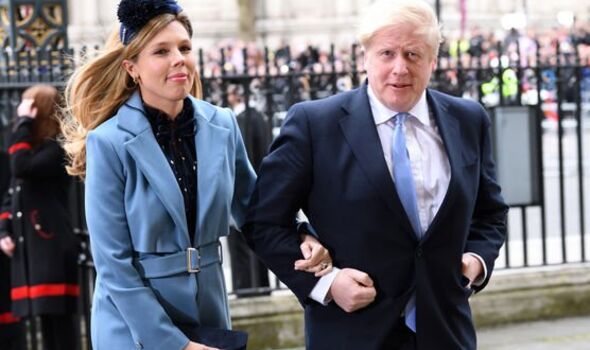 The PM and wife Carrie will face no more fines, after 126 penalties were handed out.

Mr Johnson was said to be “pleased” that the £460,000 inquiry is over, but civil servant Sue Gray’s full report into the affair is still to come.

Former Tory leader Sir Iain Duncan Smith said ministers must now focus on the cost-of-living crisis: “We need to intervene with lower taxes. That’s the big issue. Let’s  hope the public recognises breaking the rules is something that the Prime Minister and civil servants are taking on board and will never do again.”

The Metropolitan Police said that 126 fixed penalty notices had been issued for Covid lockdown rule-breaking in Downing Street, to 83 people.

Sir Iain added: “As we move forward from this, we’ve got some very big decisions to make which will really affect lives on a very wide scale.”

He said Mr Johnson and the Government must put “damaging” Partygate behind them: “People literally are facing stark choices, we need to intervene with lower taxes and intervention at the level of benefits. That’s the big issue.”

While policing minister Kit Malthouse said: “I’m sure [the Prime Minister] and the rest of the country now want to move to the really big issues, like the war in Ukraine, the cost-of-living crisis, dealing with drugs and that’s what we’re going to focus on from now on.”

Other Tory MPs were last night reserving their judgment over Partygate. One backbencher remarked: “We need to wait for Sue Gray’s report.”

But loyalist Tory MPs said that Opposition claims that the Prime Minister had broken rules repeatedly had been undermined by the Metropolitan Police’s decision to issue him with just the one fixed penalty notice.

Mr Johnson, his wife Carrie and Chancellor Rishi Sunak were each fined over a gathering held in the Cabinet Room at No 10 in June 2020 to celebrate the PM’s 56th birthday.

One loyalist Tory MP said: “A lot of people will be surprised that the Prime Minister has been fined at all for being in a room for nine minutes with a cake in a Tupperware box.”

Mr Johnson’s spokesman yesterday revealed that the PM had been told by police he will not face further fines.

He added: “I would say the Prime Minister is pleased the investigation has concluded and we’d like to thank the Met Police for their work in bringing this investigation to completion.”

“Beyond that, I think the Prime Minister will update Parliament in the first instance on the publication, once Sue Gray’s report is published.”

“And that’s when he will talk in more detail.”

“So beyond that I wouldn’t be going into more detail.”

Mr Johnson will make a statement to MPs when the Gray findings are revealed but he was unlikely to speak publicly about the matter beforehand, the spokesman added.

Officials expect Ms Gray to unveil her report on a day when the Commons is sitting.

One Whitehall insider said: “The ball is now in her court.”

On whether the police investigation costing £460,000 was a good use of taxpayers’ money, the spokesman said: “The police are operationally independent. It is for them to decide how to use their resources.”

He told reporters in Leeds: “My view on the Prime Minister has not changed. Of course, after an investigation that shows 120-plus breaches of the law in Downing Street, of course he should resign.”

Sir Keir added: “He is responsible for the culture.”

But Tory backbencher Michael Fabricant claimed yesterday that scrutiny would now switch to a Co Durham police investigation into a Labour beer-and-curry session attended by Sir Keir and his deputy Angela Rayner during a lockdown in April last year.

He wrote online: “Now that the Metropolitan Police have concluded their investigation, I await with interest what Durham Police have to say about Beergate and the lies about the number and who attended.

Mr Fabricant continued: “I think what makes Beergate worse is that as a former senior law officer [Director of Public Prosecutions], Keir Starmer should have been more honest with the police about the circumstances surrounding Beergate.”

Boris Johnson will be relieved to be no longer assisting police with their Partygate inquiries but he is not in the clear just yet.

Tory MPs, the ultimate judge and jury as far as the Prime Minister’s future is concerned, are reserving their judgement until senior civil servant Sue Gray publishes her report into Downing Street behaviour during the lockdowns.

Given that her initial findings identified “failures of leadership and judgement” at No 10, her final conclusions are expected to make her uncomfortable reading about the culture in Whitehall.

“The Metropolitan Police’s conclusion is one thing, the court of public opinion is another,” one Tory backbencher told me. The winding-up of the Scotland Yard probe also switches the focus onto the still ongoing Durham Police investigation into whether labour leader Sir Keir Starmer’s beer-and-curry session broke Covid laws.

While the last of the Downing Street fines have now been issued, it is too early to assess who will suffer the biggest political cost from this tawdry episode.