Speaking outside the famous black door of No10, the new Conservative leader said she was determined to act quickly to “transform Britain into an aspiration nation” and tackle the issues currently facing the country. She said it was her “vital mission” to ensure she delivered “opportunity and prosperity for all people and future generations”.

Ms Truss enters Downing Street at the same time energy bills are spiralling out of control, inflation is surging to 40 year higher, and trade unions are wreaking havoc with strike action.

Addressing the difficult economic circumstances that the UK finds itself in, Ms Truss urged the British public not to be “daunted by the challenges we face”.

“As strong as the storm may be, I know that the British people are stronger,” she said. 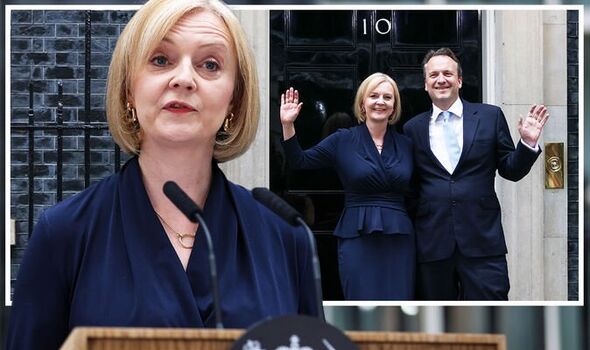 “Our country was built by people who get things done. We have huge reserves of talent, of energy, and of determination.

“I’m confident that together we can ride out the storm, we can rebuild our economy and we can become the modern brilliant Britain that I know we can be.

Outlining three immediate priorities, Ms Truss continued: “Firstly, I will get Britain working again. I have a bold plan to grow the economy through tax cuts and reform.

“I will cut taxes to reward hard work and boost business-led growth and investment.

“I will drive reform in my mission to get the United Kingdom working, building and growing.

“We will get spades in the ground to make sure people are not facing unaffordable energy bills and we will also make sure that we are building hospitals, schools, roads and broadband”.

The new Conservative leader flew up to the monarch’s Balmoral estate in Scotland to be officially asked to form a Government after Boris Johnson stepped down.

She is expected to appoint MPs to her Cabinet in the coming hours in order to be able to quickly get on with tackling the mounting crises facing the country.

Ms Truss also faces the challenge of uniting her party after a bruising leadership election over the summer.

A toxic campaign saw Tory MPs hurl insults at one another as they fought for who should have the right to lead the country.

Leaving No10 this morning, Mr Johnson urged the Conservative ranks to rally around the new Prime Minister.