Over the past year, former President Donald J. Trump’s family business suffered steep declines in revenue as the pandemic upended the nation’s hospitality industry, according to a financial disclosure report released hours after Mr. Trump departed office on Wednesday.

The report detailed a revenue drop of more than 40 percent at Mr. Trump’s Doral golf club outside Miami, and a 63 percent decline at his signature hotel in Washington, just blocks from the White House. All told, the Trump Organization declared revenue of at least $278 million in 2020 and the early days of this year, a nearly 38 percent decline from the company’s reported 2019 results.

The disclosure, which represents the final public snapshot of Mr. Trump’s finances, documents the toll the pandemic has taken on his luxury hospitality business, which essentially ground to a halt last spring when the coronavirus started sweeping through the country. Trump hotels and golf courses shuttered, and even after reopening, some faced restrictions on indoor dining and gatherings.

“There were places that due to government mandates we were not able to operate,” Eric Trump, the former president’s son who helps run the business, said in an interview on Wednesday. “Those are places you are going to lose the season because of it.”

The Trump Organization, he said, remained stable and had steady cash flow and relatively low debt compared with other real estate businesses — though as Mr. Trump left office, the company had more than $300 million in debt coming due in the next few years that the former president has personally guaranteed.

The disclosure portends greater tumult ahead for the business, which has faced widespread shunning of its brand after the deadly Jan. 6 assault on the Capitol. The violent rioting by Mr. Trump’s supporters led to his second impeachment and prompted many of the company’s corporate partners — in banking, insurance, golf and real estate — to abandon it. Morgan Lewis, the law firm that handles its taxes, became the latest to distance itself from the Trumps on Wednesday, by indicating that it would not take on new business with Mr. Trump or the company.

The scenes of rioters storming and looting the Capitol in Mr. Trump’s name, some of them armed and dressed in animal skins, also undermined the image of stately luxury that the Trump Organization had created and is expected to cost the president’s five-star hotels bookings and group outings. 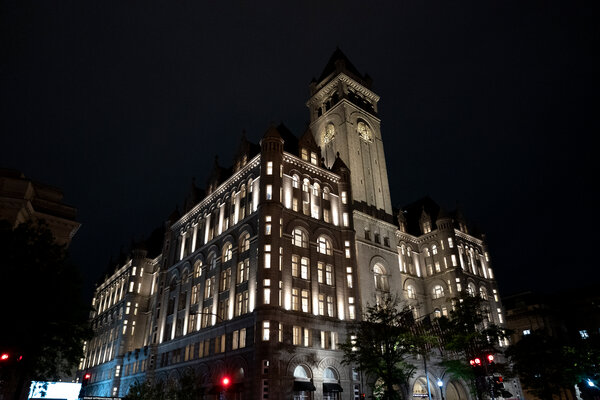 The biggest blow came when the P.G.A. of America announced it would strip Mr. Trump’s New Jersey golf club of a major tournament, setting off a wave of other ruptures, including a decision by New York City to cancel contracts with the Trump Organization for two ice rinks, the Central Park Carousel and the Trump Golf Links in the Bronx.

Even before the pandemic and the riot, the Trump presidency had complicated business for the Trump brand.

For much of his term, the company was stuck in neutral as the family name was removed from several properties and potential new deals never emerged. Mr. Trump’s polarizing politics also appeared to create a red-blue divide, leaving his hotels in Democratic bastions like New York and Chicago struggling, while his golf club in North Carolina boomed.