But Express.co.uk is asking who has been your Blue Collar favourite?

During the five-day event, Mr Sunak apologised to those who fell through the gaps throughout the coronavirus pandemic.

He said: “I have said very candidly in the past and apologised to those people, we haven’t been able to help everyone in exactly the way they would have liked. 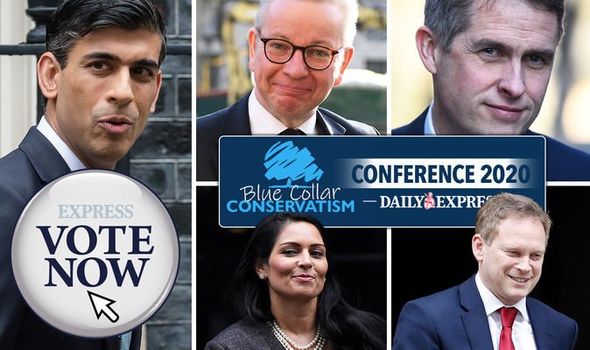 “I have everyone in my mind all the time and what I would say is even if you haven’t been helped in exactly the way you want there always is something we have done that could benefit you.”

Mr Gove used the conference to attack Brussels for its bad faith during Theresa May’s premiership when the UK tried to be accommodating in the talks.

The Chancellor of the Duchy of Lancaster, who runs the Cabinet Office, said: “The EU has this sort of kidology approach.

“They try to use tactics to make voters in Britain and British politicians worried.

“I think one of the reasons they are coming out with this now is that they know in these negotiations we have stood firm throughout.

“They are trying to say to EU politicians, look, the Brits are wobbling on this and we are not.

Home Secretary Priti Patel revealed the UK is working “actively” with EU countries but went on to slam other member states who are not “proactive” with the immigration crisis.

DON’T MISS
We must be bold to rebuild the economy, says DAVID DAVIS [COMMENT]
Rishi Sunak in candid apology to taxpayers for COVID-19 support cracks [INSIGHT]
‘We are not scared of that!’ Gove shuts down Tory rebel fears  [REVEAL]

Ms Patel said: “This year alone, so far, we’ve returned 210 people, we have 1,000 people of whom we have Eurodac information, where we’re actively working with European countries to return them.

“But, of course, there are endless legal barriers.

“For example, other EU member states are not proactive when it comes to responding to our requests to remove people under the Dublin Regulation.”

He said: “We’ve got to ensure political impartiality right across the spectrum.

“Educational organisations that are state-funded, you’ve got to ensure that you do have that impartiality.

“And you’ve got to make sure there’s a broad spectrum of views. I’ve often spoken about the importance of freedom of speech and making sure people aren’t no platformed.”

Grant Shapps, the Transport Secretary, hailed new Tory MPs who replaced Labour veterans and hit out at the Labour Party for failing to keep promises over the years.

He said: “The thing making the biggest difference is having new brilliant Tory MPs and Conservative representatives on the ground.

“Some of these seats have been promised stuff for so long, have always been Labour through and through, that’s why it was the red wall, and now they’ve got Conservative MPs who are actually out there doing things every day.