The petition has garnered more than 2,500 signatures, hours after being put up on Ukraine’s official petitions site today. Despite being forced to resign in the UK, Mr Johnson remains popular in Ukraine, with paintings, murals and even cakes in Kyiv bearing the likeness of the departing Tory leader. In Ukraine, he is affectionately called “Johnsoniuk”.

This comes as a result of Mr Johnson’s support for Ukraine following the Russian invasion, which took place on February 24, 2022.

The petition is addressed to Ukrainian President Volodymyr Zelensky.

It notes “worldwide support for Boris Johnson”, praising him for taking “a clear position against the military invasion of Ukraine, (and) wisdom in the political, financial and legal spheres”.

However, it does also note that such an appointment would not comply with Ukraine’s constitution. 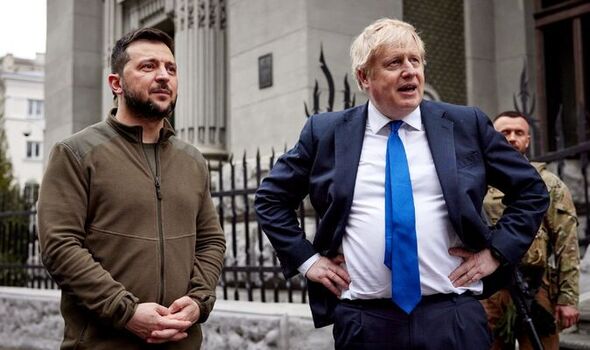 Zelensky will be obliged to officially respond to the petition if it receives 25,000 signatures.

Just a few hours after the petition was launched, Mr Johnson presented Mr Zelensky with the Sir Winston Churchill Leadership Award for what Downing Street described as “incredible courage, defiance, and dignity”.