Though a majority of Latino voters favor Democrats, Hispanic men are a small but enduring part of Trump’s base. Those supporters see him as forceful, unapologetic and a symbol of economic success. 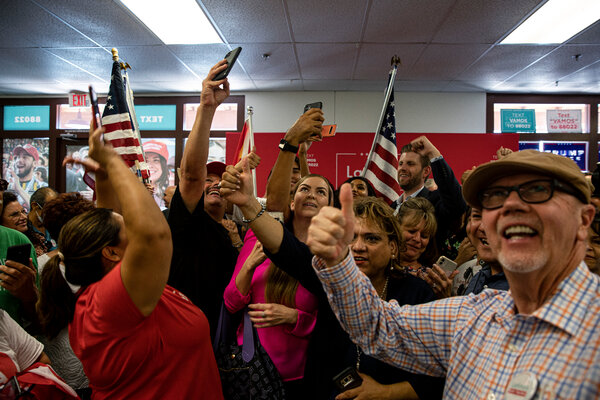 PHOENIX — They packed into the room to cheer their heroes.

The crowd of more than 100 hollered enthusiastically at Henry Cejudo, a local hero and Olympic gold medalist, the son of undocumented immigrants from Mexico who had gone on to become a mixed martial arts superstar.

But they were really there to celebrate President Trump.

Wearing red Make America Great Again hats, several men held giant American flags and stood in front of several campaign signs: “Latinos for Trump,” “Cops for Trump” and another imploring them to text “WOKE” to get the latest information on the campaign.

In the words of Eric Trump, the president’s son and the headliner of the event, the battle is simple. It’s right versus wrong, he said, to a loud round of cheers.

“They are trying to cancel our voice, guys.”

Men are the core of President Trump’s base. In polling, gender gaps exist in nearly every demographic: among white voters, among senior citizens, among voters without a college degree, men are far more likely than women to support his re-election. And little of that support has shifted in the days since Mr. Trump announced he had tested positive for the coronavirus. Polls suggest that this presidential election could result in the largest gender gap since the passage of the 19th Amendment a century ago.

Then there is one of the most enduring questions of the Trump appeal: Who are the nearly 30 percent of Hispanic voters who say they support him, despite his anti-immigration rhetoric and policies?

There is no one simple answer. Mr. Trump has strong backing from Cuban and Venezuelan exiles in South Florida, who like his stance against communism. And his campaign has heavily courted evangelical Latinos throughout the country. But no other group worries Democrats more than American-born Hispanic men, particularly those under the age 45, who polls show are highly skeptical of former Vice President Joseph R. Biden Jr.

Yet what has alienated so many older, female and suburban voters is a key part of Mr. Trump’s appeal to these men, interviews with dozens of Mexican-American men supporting Mr. Trump shows: To them, the macho allure of Mr. Trump is undeniable. He is forceful, wealthy and, most important, unapologetic. In a world where at any moment someone might be attacked for saying the wrong thing, he says the wrong thing all the time and does not bother with self-flagellation.

“I feel so powerful,” the president declared at a rally in Florida on Monday, standing in front of Air Force One. Lest anyone miss the message, the rally ended with “Macho Man” by the Village People blasting on the speakers.

Paul Ollarsaba Jr., a 41-year-old Marine veteran, voted for a Republican for the first time in 2016, won over by what he saw as Mr. Trump’s commitment to the military.

“I am Mexican,” Mr. Ollarsaba said, adding that for years he thought that meant he had to vote for Democrats. When he began supporting Mr. Trump in 2016, his family ostracized him. “My parents say: ‘Why are you supporting a racist? You’re Mexican, you have to vote this way,’” he said. “No, it’s my country. It’s fear, people are afraid of saying they support the president.”