Mr. Crow, Democrat of Colorado, held up an intelligence agency news release from days earlier and demanded to know why it said nothing about Russia’s plans.

“‘When are you going to come out publicly and correct this record?’” Mr. Crow recalled asking the official, William R. Evanina. “‘Because there’s a massive disconnect between what is in your news releases and what you’re saying publicly — because of the pressure of the president.’”

A report released Tuesday made clear that the intelligence community believed that Russia had long attacked Mr. Biden for the benefit of Mr. Trump. But throughout 2020, senior officials bowed to Mr. Trump’s hostility toward any public emphasis of the threat from Russia, and they offered Congress and the public incomplete or misleading portraits of the intelligence on foreign influence in the election.

The picture is complicated. While Mr. Trump’s enmity toward the intelligence community loomed, and his political appointees emphasized the threat from China and Iran, not Russia, career officers did also get key findings about Russian intelligence declassified and disclosed last year.

Soon after that briefing to Congress, Mr. Evanina released details about Kremlin-backed operatives denigrating Mr. Biden, fulfilling the demands of Mr. Crow and other lawmakers. In an interview, Mr. Evanina credited Congress for pushing for more information, but said it took time and effort to get other intelligence officials to declassify the information.

Once made public, the information broke new ground in describing Russian activity, but it also angered the White House.

“We were out there on our island,” Mr. Evanina said. “The White House was unhappy with us, and so were the Democrats.”

After Mr. Evanina’s disclosure, Mr. Trump and senior administration officials worked to play down the intelligence about Russian interference or to redirect focus to China’s work.

Their efforts allowed Americans to dismiss a widely accepted intelligence assessment as politics, deepening distrust and division among the electorate, current and former officials said, adding that a divided country was vulnerable to foreign interference.

“We’re so polarized,” Mr. Evanina said, “we’re going to be even more susceptible for this kind of activity moving forward.”

The newly released report, former Trump administration officials argued, blurs the definitions of influence and interference. Russia’s effort was always more about spreading misinformation and propaganda, the former officials said, and there was no evidence that the Kremlin changed votes, the report’s definition of interference.

“There is zero evidence,” said Richard Grenell, the former acting director of national intelligence. “Key judgment No. 1 is that no one interfered. This is influence vs. interference.”

Throughout 2020, current and former intelligence officials privately expressed concern about how the White House characterized intelligence. Inside the intelligence agencies, officers continued to develop classified information on Russian interference and worked to present it honestly. For example, the designated election security czar, Shelby Pierson, was consistent in how she portrayed Russian actions in briefings to Congress, according to people familiar with her testimony. 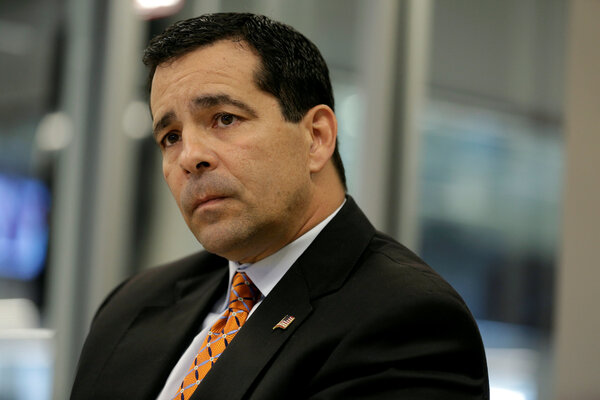 But one of her briefings, in which Ms. Pierson told lawmakers Russia favored Mr. Trump and was working for his re-election, prompted outrage among Republicans and contributed to the ousting of Joseph R. Maguire as the acting director of national intelligence. Mr. Evanina was then put in charge of briefing Congress, a role he was abruptly thrust into with little preparation, officials said.

For Mr. Evanina’s first meeting with lawmakers on election security last March, the Office of the Director of National Intelligence, then run by Mr. Grenell, prepared a document that tried to temper Ms. Pierson’s February warning by cautioning that officials had not concluded that Russia was backing Mr. Trump.

“The I.C. has not concluded that the Kremlin is directly aiding any candidate’s re-election or any other candidates’ election,” an unclassified summary given to lawmakers said, using shorthand for the intelligence community. “Nor have we concluded that the Russians will definitely choose to try to do so in 2020.”

Mr. Grenell privately pushed intelligence officials to provide evidence to back up their conclusion that Russian disinformation activity was about influencing the elections, rather than simply an effort to stoke divisive debates in the United States. He has in the past defended the March briefing as an accurate summary of the intelligence.

The newly declassified report showed that the March briefing was at best misleading to Congress and backed Ms. Pierson’s February testimony.

The report laid out how the Russian strategy of attacking Mr. Biden goes back to 2014, before Mr. Trump was a serious candidate for office. While some senior intelligence officials have suggested that intelligence on Russia was in flux at various points in 2020, the new report made clear that the intelligence community’s view on President Vladimir V. Putin’s support for Mr. Trump was little changed from 2016 to 2020.

Senior Trump administration officials’ comments about China were also at odds with the report.

John Ratcliffe, Mr. Trump’s final director of national intelligence, said publicly before and after the election that China was the greatest national security threat. In a letter to Congress, he said the intelligence community was not applying the same definition to Chinese influence operations as it was to Russia’s.

Some intelligence officials defended Mr. Ratcliffe’s comments on China, noting that Beijing was the most serious long-term threat to the United States and that it clearly tried to influence how it was viewed in America and elsewhere. The January ombudsman report did find merit in Mr. Ratcliffe’s critique of how intelligence on Chinese influence operations was handled.

Mr. Grenell said his successor was right to focus on China, and that it was wrong to dismiss his critique of the intelligence agencies because analysts used different standards when looking at China’s influence operations compared with Russia’s. “China is a crisis,” Mr. Grenell said. “Russia is a problem.”

Still, in appearances on Fox News, Mr. Ratcliffe’s relentless focus on China, rather than Russia, had the effect of leaving the impression, particularly with the president’s most enthusiastic supporters, that China was the most urgent threat to the 2020 election.

The new report rejected that assertion.

“Trying to equate, or at times suggest that, China was actually more actively interfering than Russia, it just wasn’t true,” said Representative Adam B. Schiff, Democrat of California and the chairman of the House Intelligence Committee. “I certainly tried to call them out on it at the time but wasn’t able to hold up the classified intelligence document to show how misleading they had been. But I think this report makes it very clear.”

Even if China is a long-term national security threat, Russia will continue to be the larger threat in the next few elections, Mr. Evanina said.

“There’s some political speak about China being a bigger, more existential threat,” Mr. Evanina said. “Sure they are, but not when it comes to elections.”