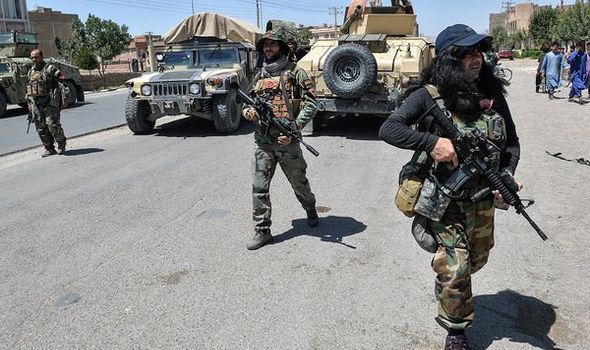 Kunduz is the fourth major city to have fallen since Friday and the Taliban’s most important gain this year.

Militants yesterday also fought their way into Sar-e-Pul, another northern city, which was captured within hours of Kunduz.

Violence has escalated across Afghanistan after US and other international forces began withdrawing their troops, following 20 years of military operations.

Taliban fighters have made rapid advances in recent weeks, capturing large swathes of the countryside and are now targeting key towns and cities. They have already retaken more than half of Afghanistan’s 421 districts in recent weeks.

The worsening situation came hours after the British and American governments told their citizens to flee the country.

US President Joe Biden remains committed to pulling out all his country’s soldiers by the end of this month.

The Foreign Office warned British citizens: “If you are still in Afghanistan, you are advised to leave now by commercial means because of the worsening security situation.”

He said: “Our abrupt retreat from Afghanistan could prove the biggest own goal the West has scored this century. The perilous consequences grow more obvious day by day.

“Unless we wake up to the reality of what is taking place, Afghanistan might once again become a terror state. This, remember, is the country that brought us 9/11.”

There is also heavy fighting in western Herat, the country’s third-largest city, and the southern cities of Kandahar and Lashkar Gah.

Thousands of civilians have been displaced this year.

Families, including babies and young children, have been sheltering in a school in the northeastern city of Asadabad.

The US has intensified airstrikes on Taliban positions, with Afghan officials saying militants have been killed.