WASHINGTON — The confirmation of Judge Amy Coney Barrett to the Supreme Court quietly but hastily got underway in the Senate on Monday, as more than a dozen senators prepared to quiz her in private meetings and their staffs began a deep scrub of her record on and off the bench.

The flurry of activity, barely 36 hours after President Trump announced Judge Barrett’s nomination, is the latest sign that Republicans plan to move with speed unseen in other recent confirmation fights to ensure the seat vacated by the death of Justice Ruth Bader Ginsburg is filled before Election Day, giving conservatives a 6 to 3 majority.

The White House planned to send paperwork to the Senate formally nominating Judge Barrett, a Notre Dame law professor and appeals court judge in Chicago, on Tuesday, when lawmakers reconvene after the Jewish high holidays. She was also scheduled to begin courtesy visits to Senators Mitch McConnell of Kentucky, the majority leader who championed her selection; Senator Lindsey Graham of South Carolina, the chairman of the Judiciary Committee; and many Republicans on the panel.

Some top Democrats, still steaming over Republicans’ rush to fill the seat so close to an election, turned down offers to meet, laying the first bricks in a wall of opposition to the nomination they plan to erect in the coming weeks. Others pledged to use the meetings to begin pressing Judge Barrett to explain her views on politically divisive issues that could come before the court, like abortion rights, gay rights, the Affordable Care Act and affirmative action.

“The whole process has been illegitimate,” said Senator Chuck Schumer of New York, the Democratic leader, adding, “I will not meet with her.”

Senators Richard Blumenthal of Connecticut and Mazie Hirono of Hawaii, both Democrats, took similar positions. And Senator Patrick J. Leahy of Vermont, a former chairman of the Judiciary Committee, complained that it was “especially unseemly to be scheduling meetings even before Justice Ginsburg has been interred with her husband at Arlington National Cemetery.” (Justice Ginsburg was expected to be interred on Tuesday.)

Out of public view, the Judiciary Committee was already working at full tilt to prepare for four days of nationally televised hearings set to begin in just two weeks. The committee typically has more than a month for such preparations, but Republicans insist no more time is necessary because Judge Barrett’s record was studied by many of the same lawmakers in 2017, when she was nominated to sit on the appeals court. 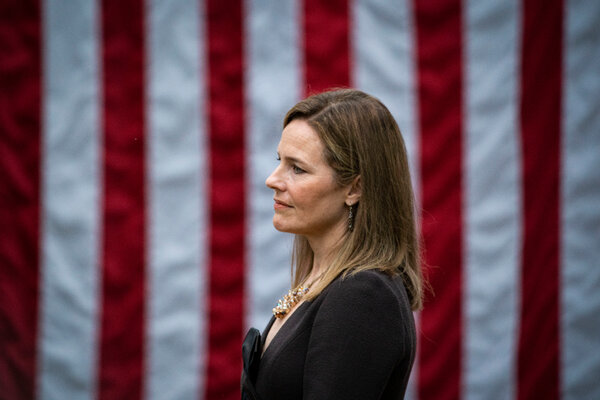 The result was a fast-moving storm of paperwork. A lengthy, standard questionnaire had been dispatched to Judge Barrett on Sunday. In it, the committee asked her to lay out a portrait of her professional life: memberships in any professional organizations; legal opinions; a comprehensive account of speeches, news interviews and any published writing; and details about her interactions with the White House around the nomination.

Judge Barrett will have to provide a financial disclosure form detailing her assets. And the committee was contemplating additional document requests based on the nominee’s time on the faculty at Notre Dame.

Both sides were quickly bringing on extra help, with close to 20 lawyers and law clerks temporarily joining the committee between the Democrats and Republicans. The additions were reported earlier by Politico.

An F.B.I. investigation into Judge Barrett’s background, a standard part of the confirmation process, was also expected to begin, congressional aides said. F.B.I. agents would typically interview associates of Judge Barrett to report to the White House, and eventually the Senate, whether she poses any national security threat to the United States. The investigation is not intended to determine whether any nominee is qualified for the position, and it would most likely build on a similar scrub conducted three years ago when Judge Barrett was first nominated for the federal bench.

In the Senate, Republicans and Democrats spent the past few days combing through hundreds of Judge Barrett’s legal decisions from three years on the federal bench, as well as earlier scholarly work.

Democrats, who plan to focus the majority of their energy on Judge Barrett’s view of the Affordable Care Act, were intensely interested in a pair of clippings for clues as to how she might rule: a 2017 law review article by Judge Barrett criticizing Chief Justice John G. Roberts Jr.’s 2012 opinion upholding one of the health law’s key provisions and a 2015 public radio interview in which she again appeared critical of the court when it upheld the law.

They also planned to highlight her dissent in a 2019 gun rights case in which Judge Barrett wrote that she would have narrowed a federal law prohibiting convicted felons from owning guns. The ruling, Democrats are prepared to argue, also implies that Judge Barrett believes voting rights can be more easily stripped than the right to bear arms.

Republicans, meanwhile, began rolling out customary lists of endorsements from across the legal profession. On Monday, the Republican Attorneys General Association lent its support in a video calling Judge Barrett “an exemplary jurist, an extraordinary mother, accomplished, honest, hardworking.”