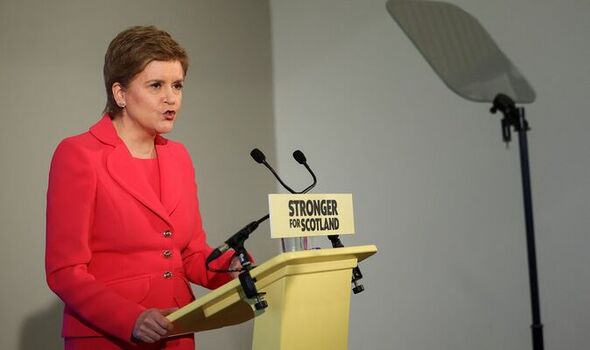 An exclusive Sunday Express survey found 71 percent of voters believe the SNP leader should receive the same treatment as Boris Johnson, who paid a £50 penalty for attending a Downing Street party. Ms Sturgeon has been one of Boris Johnson’s fiercest critics, claiming “the vast majority of the country” want him to resign. But she has admitted failing to wear a face mask while visiting a barber shop near Glasgow earlier this month, when it was still a legal requirement in Scotland.

Police Scotland said officers reminded her of the “importance of wearing a face covering when there is a legal requirement to do so”, but no further action was taken.

Ms Sturgeon said: “I have recognised I made an error in not having a mask on for literally a few seconds,” but insisted in an STV interview: “I don’t think it is equivalent to what Boris Johnson is accused of.”

She was pictured without a mask in a crowded barbers in East Kilbride, as she campaigned ahead of the May 5 local elections.

Under laws introduced by the Scottish Government, which Ms Sturgeon leads, masks remained compulsory in Scotland indoors at public settings until April 18. The First Minister has continued to encourage people to wear masks voluntarily.

It’s not the first time she broke her own rules. In 2020 Ms Sturgeon was pictured without a facemask as she attended a wake, prompting her to tell the Scottish Parliament “how sorry I am for my breach of rules that I ask all of us to follow”.

There have also been calls for a fresh police inquiry into claims Labour leader Sir Keir Starmer broke lockdown rules. Conservative MP Richard Holden has written to Durham Constabulary urging them to re-examine footage of Sir Keir having a beer with colleagues during lockdown, as he campaigned during last year’s Hartlepool by-election.

Police stated in 2021 that they did not believe an offence had been committed. But Mr Holden says the Metropolitan Police’s decision to fine Mr Johnson and Chancellor Rishi Sunak means the Durham force should think again.