None acknowledged President Trump’s defeat, or the reality of President-elect Joseph R. Biden Jr.’s victory and his incoming Democratic administration.

Instead, as Mr. Trump continues to rail against the election results and spread baseless allegations of voter fraud, Republicans in Georgia’s Senate runoff elections have deployed a strategy of avoidance. While hundreds of attendees chanted “Stop the Steal” and “Fight for Trump,” a reference to their shared belief that the election was wrongfully decided, speakers sought to rechannel the energy toward the Senate contests on Jan. 5 and the battle for control of the chamber.

Democrats must oust both Ms. Loeffler and Mr. Perdue to give their party power over both houses of Congress, in addition to the White House. On Monday, as Republicans rallied supporters, the Democratic candidates, the Rev. Raphael Warnock and Jon Ossoff, welcomed Vice President-elect Kamala Harris for an event of their own.

The two sides agree on the importance of the runoffs. “Everything that was at stake in November is at stake on Jan. 5,” Ms. Harris told the crowd in Columbus, a city in western Georgia. 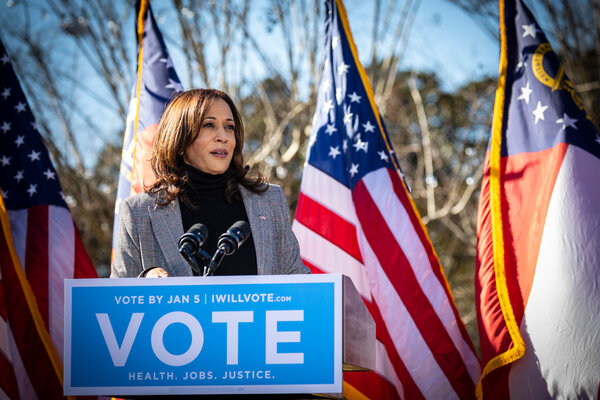 In Milton, Ms. Trump framed the contests as a crossroads for the country’s most basic values.

“Georgia will decide if our children grow up under an oppressive government or if America remains the land of the free,” she said.

Besides the shared sense of significance, the rallies had little in common. Mr. Perdue and Ms. Loeffler were both heckled by members of the audience, who called on them to more forcefully back Mr. Trump’s attempts to subvert the election. Some held signs calling for a special session of Congress to overturn the Electoral College vote, while others pushed the senators to vote against certifying the election results.

In his remarks, Mr. Perdue nodded to the anger among those in the crowd, whose voices had drowned out Ms. Loeffler at one point.

“I’m still fighting alongside him to make sure he finally gets a fair accounting in this state,” Mr. Perdue said of the president. “But my job right now — Kelly’s job, in addition to that — is to make sure we don’t give up these two seats in Georgia.”

Ms. Trump, who is often deployed as a Republican surrogate who can appeal to suburban women, focused on her father’s economic record before the coronavirus pandemic, the administration’s advocacy against child trafficking, and its investment in a Covid-19 vaccine and prevention measures.

One of her biggest applause lines, however, was about ballot security, echoing the basis of the unfounded claims that her father has pushed.

“Kelly and David are working very hard to make sure this election is safe and secure, and that every single legal vote is counted,” Ms. Trump said, lingering on the word “legal.”

The arguments about the election outcome stood in stark contrast to the celebratory mood among Georgia Democrats, who were partly taking a victory lap after winning the state at the presidential level for the first time since 1992.

“You did what no one thought could be done,” Ms. Harris said at the event in Columbus. “No good thank-you comes without asking for a little bit more,” she added, urging residents to again turn out for the Democrats.

The drive-in rally was held at the ruins of an old textile mill sitting along the Chattahoochee River that has been transformed into an event space. The day was crisp and cool, and about 100 vehicles were parked in front of the stage, as Democrats continue to limit in-person campaigning during the pandemic. Still, dozens of people got out of their cars and pushed up against barricades for a glimpse of Ms. Harris; many were sporting the green and pink of Alpha Kappa Alpha, the historically Black sorority of which Ms. Harris was a member.

Runoff elections for both parties are largely questions of turnout, as candidates and campaigns focus on motivating their bases rather than winning over new voters. In Georgia, where changing demographics and an erosion of Republican support among college-educated moderates in the suburbs have helped Democrats ascend, that has largely led to familiar strategies: Republicans seek to increase support among rural white conservatives, while Democrats focus on urban centers.

On Monday, Ms. Trump held events in the outer Atlanta area, which has been traditionally Republican and, without Mr. Trump on the ballot, might vote differently in the runoff races than it did in the general election. Ms. Harris was in Columbus, one of the state’s larger urban areas, where Democrats improved their performance in November and are seeking to capitalize again.

Both campaigns had more events scheduled on Monday, but Ms. Harris and the Republican senators had to return to Washington to vote on the emergency coronavirus relief package.

Mr. Warnock and Mr. Ossoff have repeatedly attacked their Republican opponents as financially corrupt. Citing stock transactions by the senators — including deals made during the pandemic — they have tried to brand the Republicans as the “Bonnie and Clyde of political corruption,” as Mr. Ossoff once said.

“Two United States senators more concerned with using their offices to line their pockets than we the people who pay their salaries,” Mr. Ossoff said at the rally. “We deserve better, Columbus, and retirement is coming for Kelly Loeffler and David Perdue.”

Mr. Warnock accused Ms. Loeffler of name-calling. “This is serious business, and she’s busy calling me names,” he said. “I’m trying to have a debate, and she’s just engaging in name-calling. That’s all right. As we say in the South, ‘Bless her heart.’”

The Republican candidates have rarely mentioned Mr. Ossoff at events, training their rhetorical fire on Mr. Warnock and the national Democratic agenda. Mr. Warnock, who would be the state’s first Black senator, has a pulpit with deep ties to the civil rights movement as the pastor of Ebenezer Baptist Church in Atlanta.

In her debate against Mr. Warnock early this month, Ms. Loeffler repeated the phrase “radical liberal Raphael Warnock” more than a dozen times. She used it again in Milton, as she tried to characterize his history as a clergyman as a sign of extremist underpinnings.

“The future of the country is on the line right here,” Ms. Loeffler said. “We are the firewall.”

But many in the audience were not there for her, for Republicans, or even for Ms. Trump. They were single-mindedly devoted to the president and his unfounded claims of election fraud, which threaten to fracture the party. Ms. Trump at one point praised Georgia’s Republican governor, Brian Kemp, a frequent target of Mr. Trump’s, which caused some attendees to bristle.

Nancy Babbitt, who attended the rally, was upset that Ms. Loeffler had, to this point, refused to say whether she would vote to certify the election results in the Senate on Jan. 6, the day after the runoffs. Ms. Babbitt said she was unsure that Ms. Loeffler and Mr. Perdue were going to win, because in failing to secure the most loyal Trump supporters, “they are missing the MAGA vote.”

“What are they hiding?” Ms. Babbitt asked.

Carol Grusin, who wore a sticker supporting Ms. Loeffler and considers herself a moderate Republican, said she wished the “Stop the Steal” heckling would end.

Mr. Trump should concede, she said.