Rush Limbaugh was a uniquely merciless media voice whose influence frightened and awed presidents for three decades — often at moments of trauma for the nation and of political upheaval that they could trace back to something uttered through the radio host’s microphone.

In 1992, as President George H.W. Bush faced a revolt from the right led by Patrick J. Buchanan, a rival Mr. Limbaugh had promoted, Mr. Bush extended an olive branch by inviting the host to stay overnight in the Lincoln Bedroom. Mr. Limbaugh returned the favor by leaking that the president had been so gracious, he carried his guest’s bag upstairs.

In 1995, after Timothy McVeigh killed 168 people with a fertilizer bomb in Oklahoma City, President Bill Clinton called out the “promoters of paranoia” on the airwaves in a rebuke that was widely seen as directed at Mr. Limbaugh.

And within minutes of the announcement of Mr. Limbaugh’s death on Wednesday, former President Donald J. Trump called Fox News to offer his condolences on live television. He praised his friend, a golfing buddy in Palm Beach, Fla., for backing up his spurious claims about having been cheated of victory in last year’s presidential election.

Mr. Limbaugh wasn’t the first conservative media star to endorse Mr. Trump for president. But he was among the first to popularize — and normalize, for many Republican politicians and voters — the style of politics that would become synonymous with the Trump name.

There was no person or subject that was off-limits for Mr. Limbaugh’s ire. Black people, gay men and lesbians, feminists, people with AIDS, the 12-year-old daughter of a president, an advocate for victims of domestic violence: All found themselves the subject of denigrating put-downs by Mr. Limbaugh over the years.

He spun conspiracy theories about the supposed involvement of Mr. Clinton and his wife, Hillary, in the death of the former deputy White House counsel Vince Foster, and spread lies about former President Barack Obama’s birthplace. He insisted in 2009, for instance, that Mr. Obama “has yet to have to prove that he’s a citizen” and almost always referred to him on the air by using the former president’s middle name, Hussein, a trope that right-wing commentators used to evoke the false impression that he was not an American and was possibly a Muslim. 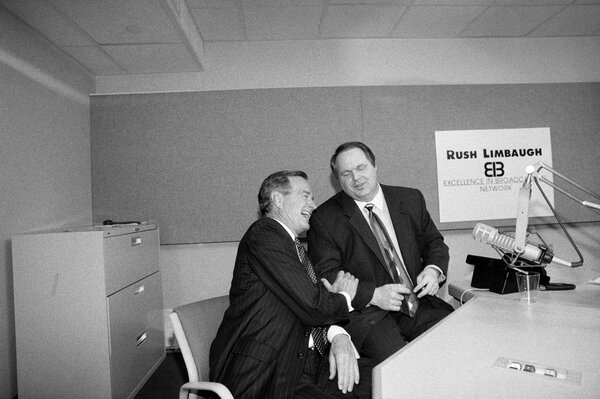 Few media stars were as crucial in making disinformation, false rumors and fringe ideas the right’s new reality. And toward the end of the Trump presidency, Mr. Limbaugh’s willingness to indulge the paranoia among Mr. Trump’s most ardent supporters was especially powerful in misleading people to believe that bad news about their president — like his loss in November or his mismanagement of the coronavirus response — was simply made up by his enemies or the result of a nefarious plot. (In the case of the virus, Mr. Limbaugh called it nothing more than a “common cold.”)

In turn, Mr. Limbaugh rarely apologized for his comments and often attacked those who called him out, arguing that they were taking him too seriously or twisting his words out of context. Often, Mr. Limbaugh denied he had said what his critics claimed.

Mr. Trump’s widespread appeal with voters initially confused many people in politics. But anyone who was a regular listener of Mr. Limbaugh’s three-hour weekday radio program, which reached roughly 15 million listeners each week, would have been less surprised.

“To conservatives, it all sounded familiar,” said Nicole Hemmer, a media scholar at Columbia University and the author of a book on Mr. Limbaugh and other conservative media figures, “Messengers of the Right.”

“The insults, the nicknames, the really outrageous statements — they had been enjoying that as a form of political entertainment for a quarter-century before Donald Trump,” Dr. Hemmer added.

Mr. Limbaugh attacked Black athletes like the quarterback Donovan McNabb, whose success he attributed to a news media that was “very desirous that a Black quarterback do well.” He described a preteen Chelsea Clinton as the “White House dog.” He denigrated Pete Buttigieg, the first openly gay man to be a serious contender for president, as “a 37-year-old gay guy kissing his husband onstage.”

Both Mr. Limbaugh and Mr. Trump made fun of people with disabilities. Mr. Limbaugh once shook his body during a broadcast to mimic the actor Michael J. Fox, who has Parkinson’s disease. Mr. Trump, in a strikingly similar display, once flapped his arms in a cruel imitation of a New York Times reporter who has limited use of his upper body.

But it was more than their behavior. The way their fans were similarly eager to defend the most indefensible conduct of both men was a sign that the nation’s political divide was hardening into something more personal and tribal. Mr. Limbaugh’s most loyal listeners developed a capacity to excuse almost anything he did and deflect, saying liberals were merely being hysterical or hateful. And many loved him even more for it.

Allie Beth Stuckey, a conservative writer and podcast host, responded to news of his death on Wednesday by saying, “Rush was hated by all the right people.”

Mr. Limbaugh’s recklessness with the truth and lack of any evident concern for the danger posed by feeding paranoia on the right served him well once Mr. Trump became the Republican nominee in 2016 and later the president. Mr. Limbaugh, who worked with his producers to carefully comb through calls and emails from his fans, listened to his audience but rarely went out on a limb where he couldn’t be sure it would follow. And he was not initially all-in on Mr. Trump.

But that changed after Mr. Trump won the nomination. Mr. Limbaugh’s loyalty to the president, whose Mar-a-Lago club in Florida is not far from his own oceanfront estate, only grew stronger as Mr. Trump’s conduct during the 2016 campaign and in office became the subject of multiple investigations, a special counsel inquiry and two impeachments.

Last year, Mr. Trump awarded him the Presidential Medal of Freedom at the State of the Union address and had Melania Trump, the first lady, hang it around the ailing host’s neck.

And Mr. Limbaugh stood behind the former president right up until the end, fanning the political flames. He compared the rioters who stormed the Capitol last month, furious because they believed the lies about the election from Mr. Trump and media personalities like himself, to Revolutionary War-era patriots. And on the day President Biden was inaugurated, Mr. Limbaugh was still claiming that it was all a fraud. “I think they know that this is something that’s been arranged rather than legitimately sought and won,” he said, referring to Democrats.

Mr. Limbaugh’s rise as a gatekeeper of conservatism and kingmaker in the Republican Party helped accelerate the trend in G.O.P. politics away from serious and substantive opinion leaders and politicians, and toward figures who were provocative, entertaining and anti-intellectual. Mr. Limbaugh — like Glenn Beck, Sean Hannity and other right-wing hosts who broke out later on — did not graduate from college. He started his career in radio as a disc jockey, not a political commentator.

“Without Rush Limbaugh, there is no way you get from the party of George H.W. Bush to Donald Trump,” said Brian Rosenwald, a Harvard scholar who tracks disinformation in talk radio. “Over 32 years, he conditioned his audience as to what they wanted to hear and what they had an appetite for. And it thrilled them to hear someone who said what they might have thought, but felt uncomfortable saying. And Trump applied that to politics.”

Before Fox News came into existence in 1996 — the brainchild of Roger Ailes, who was Mr. Limbaugh’s friend and onetime executive producer and brokered the attempted peace with Mr. Bush in 1992 — Mr. Limbaugh was the undisputed king of conservative media. He forged a personal bond with his audience that was nothing like what the highbrow vanguards of opinion on the right, like National Review, had.

“I remember it was the first time there was this universal sense that everyone was listening, and people would ask, ‘Did you hear what Rush said today?’” said Russ Schriefer, a veteran Republican media consultant.

“The conservative media market has become so fragmented now,” he added. “But this was in a pre-Fox world. And at the time, he was the singular voice of the conservative politic in America.”

Mr. Limbaugh was hardly modest or unaware of how he could rouse a response from the president of the United States. In 2013, after Mr. Obama criticized Republicans for being “concerned about what Rush Limbaugh might say about them,” Mr. Limbaugh claimed with more pride than annoyance: “He simply cannot get me off his mind. I live rent-free in his head.”