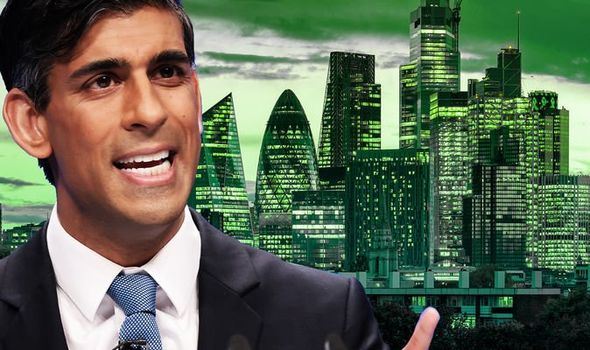 Speaking at the COP26 climate summit in Glasgow tomorrow, the Chancellor is to propose new rules designed to turn the City of London into the world’s first “net zero-aligned” financial centre. He will also say UK financial chiefs have “responsibility to lead the way” in the international effort to cut emissions of greenhouse gases.

Mr Sunak is to set out his proposals in a speech to the largest ever gathering of finance ministers.

It takes place today as part of a dedicated “Finance Day” at the United Nations-organised summit.

Under the Chancellor’s proposals, UK financial institutions and listed companies will face a new requirement to publish net-zero transition plans that detail how they will adapt and decarbonise as the UK moves towards the UN-target of a net-zero carbon emission economy by 2050.

A new “gold standard” for the plans will guard against over-hyped claims of going green, known as “greenwashing”.

It will be set by a new Transition Plan Taskforce made up of industry and academic leaders, regulators, and civil society groups.

In his opening keynote at Finance Day, the Chancellor will hail the progress made to “rewire the entire global financial system for net zero” under the UK’s leadership of COP26.

He will also reveal that investments worth more than £100 trillion ‑ around 40 percent of the world’s financial assets ‑ is currently being aligned with the climate goals in the UN’s Paris Agreement, including limiting global warming by the end of the century to a further 1.5C.

More than 450 finance firms, based in 45 countries across six continents, have adopted the commitments.

Highlighting the emphasis the UK’s COP Presidency has placed on getting finance to the most vulnerable countries, Mr Sunak will also highlight that a 100-billion dollar climate finance target will be met by 2023 and urge developed countries to boost their support to developing countries including by helping them tap into the trillions of dollars committed to net zero by the private sector.

British officials will seek to address barriers to finance faced by developing countries with a series of new green initiatives funded from its international climate finance (ICF) commitment, he will say.

Mr Sunak will also announce that the UK will spend £576million on a package of initiatives to mobilise finance into emerging markets and developing economies.

The total includes £66million to expand the UK’s MOBILIST programme, which helps to develop new investment products which can be listed on public markets and attract different types of investors.

At the summit on Tuesday, UK and Scandinavian pensions funds combined to commit £100billion to fight climate change.

The funds will avoid investing in projects that damage the climate and instead support sustainable activities.

The move was welcomed by David Hayman of campaigners Make My Money Matter which was set up by Blackadder writer Richard Curtis.

Mr Hayman said: “On day two of COP26, this collective commitment shows just how powerful our pensions can be in tackling the climate crisis.

“Nordic and UK pension schemes are using their pension power to tackle the climate crisis, not fuel the fire.

“Now it’s time for the rest of the industry to follow suit; urgently reducing emissions, investing in climate solutions, and committing to robust net-zero commitments.

“Along with today’s political announcements on deforestation, it is clear that those who hold our money can no longer shirk from their responsibilities ‑ they must act with the urgency that the world demands.

“This commitment is a critical first step in ensuring everyone has a pension to be proud of.”

Make My Money Matter says the world’s £33trillion pension industry could transform the fight against climate change by greening its investments.