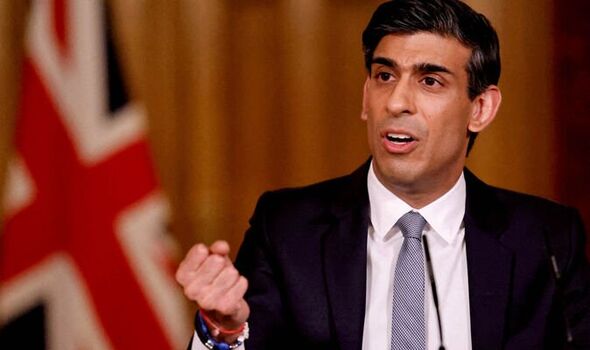 He will give struggling households billions of pounds in aid to ease the pain of cost-of-living rises. The Chancellor is tipped to slash fuel duty in his mini-budget and to spare the lowest paid a National Insurance increase. Mr Sunak will promise Britain can look forward to the “security of a faster-growing economy”, despite rocketing energy bills and turmoil caused by Putin’s war on Ukraine.

He is expected to say in his financial Spring Statement: “We will confront this challenge to our values not just in the arms and resources we send to Ukraine but in strengthening our economy here at home. So when I talk about security, yes – I mean responding to the war.

Mr Sunak will pledge to help millions hardest hit by increasing prices despite rising concerns at the growing debt burden of the Government’s pandemic response. The lowest-paid may be kept out of April’s NI rise.

Interest payments on Treasury debt soared to £8.2billion last month from £5.4billion a year ago – the highest figure for any February on record, data showed yesterday. But the Chancellor has some room to announce more spending as rising tax revenue means debt is falling faster than forecast by the Office for Budget Responsibility (OBR).

Mr Sunak’s Commons speech will reaffirm “unwavering” support for Ukraine. The Chancellor will say freedom and democracy remain the best routes to peace, prosperity and happiness. He will argue a strong UK economy is needed to counter the threat that Russia poses to Western values.

His Spring Statement will include measures to build “a stronger, more secure economy” and plans for a “culture of enterprise” with measures to encourage investment, training and innovation in the private sector.

Treasury officials say today’s measures will be on top of already announced Government support worth around £21billion this year to help families with the cost-of-living squeeze.

The Chancellor unveiled a £9.1billion Energy Bills Rebate this year to spread the cost of rising fuel charges. The Government is also raising the National Living Wage to £9.50 an hour next month – people working on it full time will see a £1,000 increase in annual earnings.

Office for National Statistics (ONS) data yesterday revealed public sector net borrowing was £13.1billion last month, the second-highest February total since records began in 1993. It was £2.4billion less than in February last year but still £12.8billion more than in February 2020 before Covid struck.

ONS officials said the jump in debt interest payments was due to a recent surge in the Retail Prices Index (RPI) measure of inflation, which determines payouts on index-linked gilts. RPI hit its highest since March 1991 at 7.8 percent in January, up from 7.5 percent in December.

Responding to the borrowing figures, Mr Sunak said: “The ongoing uncertainty caused by global shocks means it’s more important than ever to take a responsible approach to the public finances. With inflation and interest rates still on the rise, it’s crucial that we don’t allow debt to spiral and burden future generations with further debt.

“We have supported people – and our fiscal rules mean we have helped households while also investing in the economy for the longer term.”

“The UK Government borrowed about £5billion more than expected in February, as higher debt interest costs offset a rise in tax revenues.

“Nonetheless, favourable revisions to past months mean that borrowing is still on track to undershoot the OBR’s forecast for the fiscal year 2021-22 by about £24billion.”

He added: “Looking forward, rising inflation will keep debt servicing costs high. But OBR analysis has already shown that an inflation shock is likely to reduce borrowing overall, thanks to the boost to revenues, even with much larger hikes in official interest rates. Inflation will surely reduce the burden of debt relative to national income, especially with real interest rates likely to remain low – even negative – for the foreseeable future.

“Indeed, debt has already fallen to 94.7 percent of [Gross Domestic Product], from a recent peak of more than 100 percent. In short, there is nothing in these numbers to prevent the Chancellor from easing the pressure on households and businesses.”

Meanwhile, charity chiefs warned that a fifth of older households ineligible for a council tax rebate to offset energy price rises are already living in poverty or hardship.

Its poll found 21 percent of older households which will not receive the £150 rebate as their home is not in bands A to D are in poverty, are just above the poverty line or are in receipt of income-related benefits.

There are 4.3 million households in England not eligible for the rebate because the properties are banded E to H – 2.1 million have at least one person of 60 and over.

Age UK said that highlighted the “cracks” in Government support for older people in poverty or financial hardship “who happen to live in the wrong kind of homes”.

It warned basics such as food and heating were fast becoming unaffordable for pensioners on a low fixed income, even before energy bills soar from April 1.

It wants targeted help to lessen next month’s whole 54 percent price cap rise for lower-income households, up to £500 for those eligible for the cold weather payment and a doubling of the discretionary fund to £288million to support people missing out on the council tax rebate.

Charity director Caroline Abrahams said: “We simply cannot see how older people who have no other sources of income besides their state pension and benefits will be able to pay the higher prices they face.

“The Spring Statement is the Chancellor’s opportunity to demonstrate he understands how inflation is overwhelming the best efforts of older people on low incomes to stay afloat. It’s an absolute nightmare.”

Another survey has found only one in 10 people think the economy will improve in the next 12 months, while nearly three quarters believe the situation will worsen.

Consumer group Which? said confidence among 2,000 it asked was the lowest since October 2020. One in 20 said their household missed paying a bill in the last month.