WASHINGTON — President Trump appeared to secure enough support on Monday to fill the Supreme Court seat left open by the death of Justice Ruth Bader Ginsburg, although Senate Republicans remained publicly undecided if they would try to force through his nominee before the election or wait until after voters have decided whether to grant him a second term.

With key Republican senators agreeing to install a new justice at least by the end of this year, Mr. Trump said he would announce his choice for the seat by Friday or “probably Saturday,” after memorial services for Justice Ginsburg, and pressed his allies to vote before the election in what would be the fastest contested Supreme Court confirmation in modern history.

Such a timetable, however, would leave only 38 days for the Senate to act and, as a practical matter, even less time because it is highly unlikely that Republicans would want to vote in the last few days before an election in which several of them face serious threats. Some senior Republican senators were still expressing caution about such an accelerated timetable even with the votes in hand.

The president was buoyed after Senators Charles E. Grassley of Iowa and Cory Gardner of Colorado, two of three remaining Republican who might have opposed filling the seat, announced that they would support moving ahead with a nomination even though they refused to consider President Barack Obama’s nomination in an election year in 2016. That left only Senator Mitt Romney of Utah as undecided, but even without him, it appeared to guarantee at least 50 Republican votes to move ahead, with Vice President Mike Pence available to break a tie.

With polls showing him trailing former Vice President Joseph R. Biden Jr., the Democratic presidential nominee, the president insisted on pressing ahead without waiting for the election. “I’d much rather have a vote before the election because there’s a lot of work to be done, and I’d much rather have it,” Mr. Trump told reporters. “We have plenty of time to do it. I mean, there’s really a lot of time.”

Mr. Trump privately met at the White House on Monday with Judge Amy Coney Barrett of the United States Court of Appeals for the Seventh Circuit in Chicago, his front-runner and a favorite of anti-abortion conservatives. 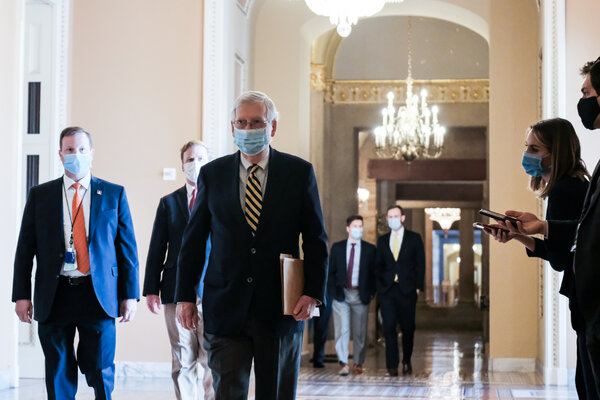 Justice Ginsburg, who died on Friday at 87, will be honored at a private ceremony in the Great Hall of the Supreme Court on Wednesday morning, then will lie in repose outside the building for the rest of the day and on Thursday, the court announced, an unusual arrangement intended to accommodate the tens of thousands of admirers expected to pay their respects in the middle of the coronavirus pandemic.

The justice will also lie in state in the United States Capitol, the first woman in American history to be so honored, and her coffin will be placed on the same catafalque that bore the body of President Abraham Lincoln, Speaker Nancy Pelosi announced on Monday. The only other member of the Supreme Court ever to lie in state at the Capitol was William Howard Taft, who had served as president before becoming chief justice.

The politics of Justice Ginsburg’s replacement roiled Washington as senators returned to town for the first time since her death.

Senator Mitch McConnell of Kentucky, the Republican leader, reiterated that he intended to fill the seat before year’s end, but he did not explicitly commit to a vote before the election. Two members of his conference, Senators Susan Collins of Maine and Lisa Murkowski of Alaska, have already said they oppose filling the seat until voters decide the presidency, and Mr. McConnell can afford to lose only one more Republican.

“The Senate has more than sufficient time to process a nomination,” Mr. McConnell said on the Senate floor. “History and precedent make that perfectly clear.”

“This Senate will vote on this nomination this year,” he added in a speech that was intended to begin justifying the decision to proceed after Republicans refused to even consider President Barack Obama’s nomination of Judge Merrick B. Garland for almost nine months in 2016 partly on the grounds that voters should have a say in who filled the lifetime appointment.

Mr. McConnell and other Republicans sought to rationalize taking the opposite position this year by pointing out that unlike four years ago, their party controls both the White House and the Senate.

Senator Lindsey Graham of South Carolina, the chairman of the Judiciary Committee that will consider the president’s nomination, had vowed repeatedly not to support confirming any selection by Mr. Trump in an election year in keeping with the 2016 decision, only to flip-flop this weekend.

In a letter to Democrats on his committee on Monday, Mr. Graham made no attempt to argue that he was being consistent or following a nonpartisan principle, but instead said he reversed himself in retaliation for the Democrats’ treatment of Justice Brett M. Kavanaugh when he was confirmed in 2018 and because Republicans have the power to proceed. “I am certain if the shoe were on the other foot, you would do the same,” Mr. Graham wrote.

Mr. Grassley, his predecessor as committee chairman and a key figure in helping Mr. McConnell block consideration of Judge Garland, likewise reversed himself on Monday. As recently as this summer, Mr. Grassley told reporters that out of fairness and consistency, he would not support advancing a Trump nominee before the election if he were still chairman.

But in a statement on Monday, he noted that the chairmanship was now Mr. Graham’s, and he would support his decision.

“Once the hearings are underway, it’s my responsibility to evaluate the nominee on the merits, just as I always have,” Mr. Grassley said. “The Constitution gives the Senate that authority, and the American people’s voices in the most recent election couldn’t be clearer.”

His fellow Iowa Republican, Senator Joni Ernst, who has a tough race this fall, said on Monday that once Mr. Trump announced his choice, she would “will carry out my duty” as a member of the Judiciary Committee to evaluate the nomination.

Mr. Gardner who is up for re-election and badly trailing his Democratic rival in a blue state where Mr. Trump is deeply unpopular, likewise threw his support to the president. “I have and will continue to support judicial nominees who will protect our Constitution, not legislate from the bench, and uphold the law,” he said. “Should a qualified nominee who meets this criteria be put forward, I will vote to confirm.”

Mr. Romney, who has been a frequent critic of Mr. Trump, was the last Republican who might balk. He is concerned about preserving the court’s reputation among the public, aides said, but he is also a deeply committed conservative reluctant to let an opportunity to shape the court pass by. He said he planned to announce his views after a senators’ lunch on Tuesday.

Senator Chuck Schumer of New York, the Democratic leader, excoriated Republicans for what he called a brazen power play. “To try and decide this at this late moment is despicable and wrong and against democracy,” Mr. Schumer told reporters.

Privately, Mr. McConnell was polling advisers and deputies about a complex set of political considerations with control of the Senate and presidency at stake. Some Republicans argued for announcing a nominee right away and beginning hearings but waiting to vote in a lame-duck session after the election.

Senator Roy Blunt of Missouri, a member of Mr. McConnell’s leadership team, said confirming a new justice by Nov. 3 would set “the new recent world record.” He added, “We’d have to do more than we’ve done in a long time to get one done that quickly, but it’s possible.”

Since 1975, the average Supreme Court confirmation has taken about 70 days, and only two confirmations were quicker than currently contemplated — Justices John Paul Stevens in 1975 and Sandra Day O’Connor in 1981, both of whom were approved unanimously. Since Justice Ginsburg was confirmed, but with little opposition in 1993, no confirmation has taken less than 62 days.

The Senate is out of session for Yom Kippur next Monday and Tuesday, leaving fewer than 25 business days before Election Day to vet any nominee, conduct multiple days of hearings and hold committee and floor votes. If they moved at breakneck speed with no surprises, Republicans could, in theory, hold a vote by late the week of Oct. 19 or early the next.

But Democrats have a few tools to slow down the process — most notably the ability to postpone approval by the committee for a week — but they most likely have no means to stop Republicans because filibusters were eliminated in Supreme Court confirmations.

To White House officials, the short time frame argued for Judge Barrett because she was a finalist two years ago and therefore already largely vetted. As she met with the president on Monday, people close to the process said she remained the likeliest choice, but there was still attention on Judge Barbara Lagoa of the 11th Circuit because she is a Cuban-American from Florida, a critical state for the president’s re-election chances.

Mr. Trump told reporters that he had narrowed the list to five women, but the other three identified by the people informed about the process were seen as long shots: Kate Todd, a deputy White House counsel, and Judges Allison Jones Rushing of the Fourth Circuit and Joan L. Larsen of the Sixth Circuit.

The brewing confirmation fight quickly became a campaign issue. Committing an initial $2.2 million in spending, Judicial Crisis Network, a conservative advocacy group, fired the first shots in what is expected to be a costly advertising war to try to sway public sentiment and influence key Republican senators. The group said it would run ads in Colorado and Utah, as well as Iowa, Maine and North Carolina, where Republican incumbents are in competitive races.

“Follow precedent,” the narrator urges in the ad. “Confirm the judge.”

Republicans hope the issue will energize conservative voters who might otherwise not turn out, but a new poll released on Monday suggested that Democrats might be more energized by the fight. Sixty percent of Democrats called the Supreme Court “very important” in deciding their vote in November, up 12 percentage points, while 54 percent of Republicans agreed, according to the survey by Politico and Morning Consult.

While aides wanted him to announce his pick as early as Tuesday, Mr. Trump said he opted to wait out of deference to Justice Ginsburg. But even as he talked about showing respect for her, he asserted with absolutely zero evidence that her dying wish that she not be replaced until the next president is chosen, as conveyed by her granddaughter to NPR, was actually scripted by Democrats like Ms. Pelosi, Mr. Schumer or Representative Adam B. Schiff of California.

“I don’t know that she said that, or was that written out by Adam Schiff and Schumer and Pelosi?” he told “Fox & Friends.” “I would be more inclined to the second, OK, you know? That came out of the wind. It sounds so beautiful, but that sounds like a Schumer deal, or maybe a Pelosi or Shifty Schiff.”

Reporting was contributed by Maggie Haberman and Michael Gold from New York, and Michael Crowley and Emily Cochrane from Washington.

President Trump’s expected announcement of a Supreme Court nominee will reshape the presidential campaign and draw intense attention to a handful of Republican senators.