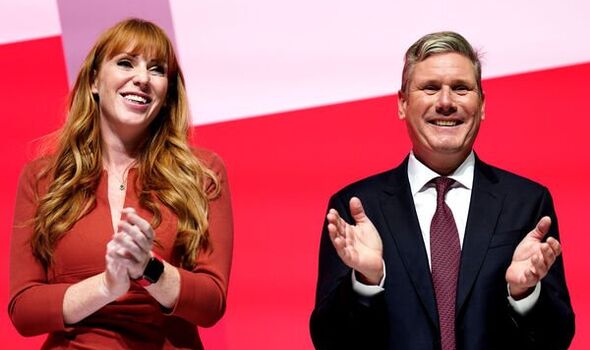 She contrasted that with Labour’s recent policy pledges, insisting her party would be “radical, responsible, realistic” if it was elected to power.

Delivering the closing speech to Labour’s conference in Liverpool, Ms Rayner also claimed that the financial crisis meant that ousted PM Boris Johnson was concocting a return to power.

She added: “He’ll be sat on the backbenches plotting his comeback, with a glint in his eye, thinking: ‘I wasn’t so bad after all was I?’ What a sorry state of affairs.” Sir Keir Starmer’s deputy had earlier mocked Ms Truss for having “crashed the pork market” – a reference to the PM’s enthusiasm for the sector when she was Environment Secretary.”

But one Tory source hit back: “Labour cannot be taken seriously with cheap shots. It’s true to form they would stoop so low when millions of people want seriousness, not lame attempts to make gags.”

Labour’s conference drew to a close after a session which saw the party present itself to voters as a Government-in-waiting.

On the final day the party set out plans to force GPs in England to provide face-to-face appointments to every patient that requests them – and a pledge to offer every primary school child access to a breakfast club.

Shadow health secretary Wes Streeting, left, said: “Patients are finding it impossible to get a GP appointment when they need one, in the manner they want one.”

“The Conservatives have closed hundreds of practices since the 2019 election and are breaking their manifesto promise to hire more GPs.”

Labour will train the doctors our NHS needs to treat patients on time by doubling the number of medical school places.

“We will require GPs to give patients the choice of where and when they want their appointments. Patients must come first.”

The party’s plans included requiring every general practice to allow bookings through the NHS app, making it simpler to obtain an appointment and ending the 8am rush to secure a consultation.

The four-day conference concluded with renditions of Labour anthem The Red Flag and of Jerusalem, with both Ms Rayner and Sir Keir joining in.