More than 4,000 migrants have reached the UK so far this year by crossing the English Channel in small boats, as a political row over the issue intensifies.

While southeast England basked in roasting sunshine on Sunday, a dozen people arrived in Dover after making the dangerous crossing.

It followed 151 who landed the previous day, putting the total since 1 January at 4,100.

The government has asked the Navy for help and a former Royal Marine has been appointed “clandestine Channel threat commander” to try and cut down the numbers.

Home Secretary Priti Patel vowed last year that the crossings would have become an “infrequent phenomenon” by now.

She has since called the figures “appalling” and levelled blame at her counterparts on the continent as she revealed the UK and French governments were locked in a row over the interpretation of maritime law. 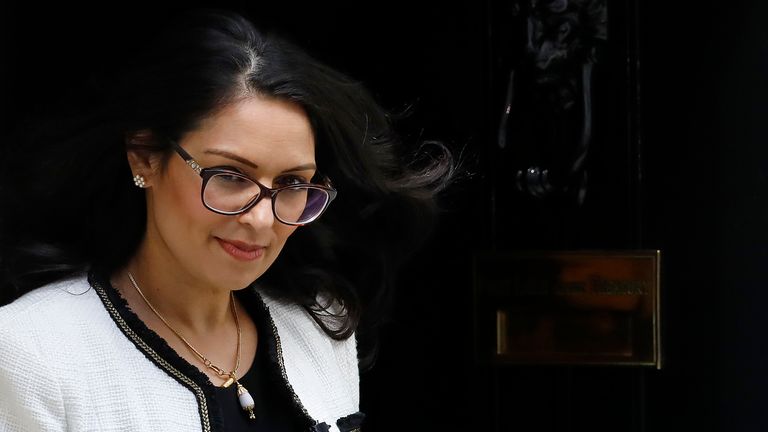 The Sunday Telegraph reported France wants £30m to cover the costs of increased policing to stop the migrants crossing into English waters.

It also claims ministers are looking into chartering spy planes and drones.

Bridget Chapman, spokeswoman for the Kent Refugee Action Network, said the government’s handling of the situation is “increasingly chaotic”.

“Nothing they have done so far has worked,” she said.

“They have spent millions of pounds of taxpayers’ money fortifying the port at Calais, have increased patrols in the Channel, and are now escalating a failing strategy by calling in the military to deal with a humanitarian situation.

“Priti Patel has said that she wants to make the Channel ‘unviable’ for people attempting to cross. But what is unviable is her approach.”

A government source told Sky News earlier this weekend that a “passive blockade” in the Channel was being considered.

Immigration minister Chris Philp will meet his French counterparts next week as he seeks to shut down the Calais-to-Britain route completely.

Natalie Elphicke, the Conservative MP for Dover, is calling for migrants to be returned to France irrespective of whether they are picked up in British or French waters.

Recent calm conditions on the sea have prompted a huge surge in people trying to make the journey.

Kent County Council has said that 400 migrant children have been taken into its care this year, including 60 in the first week of August and 23 on Friday alone.