Joseph R. Biden Jr. returned to his Pennsylvania birthplace, Scranton, on the morning of Election Day, addressing supporters outside a carpenters’ union hall and visiting his childhood home.

“It’s good to be home,” the former vice president said at a canvass kickoff, wearing a mask and speaking through a bullhorn with Biden-Harris stickers on it. “Scranton is where I learned, like you did, all my basic values.”

Mr. Biden also paid a visit to his childhood home, where he signed a message the living room wall: “From this house to the White House with the grace of God.”

“I watch you all the time,” Anne Kearns, who lives there now, told him. “I’m so proud of you.”

Mr. Biden had started the day attending St. Joseph on the Brandywine Roman Catholic Church in Wilmington, Del., with his wife, Jill, and two of their grandchildren, and then visiting the cemetery where several members of his family are buried, including his son Beau, his first wife, Neilia, and their daughter, Naomi, according to a pool report. 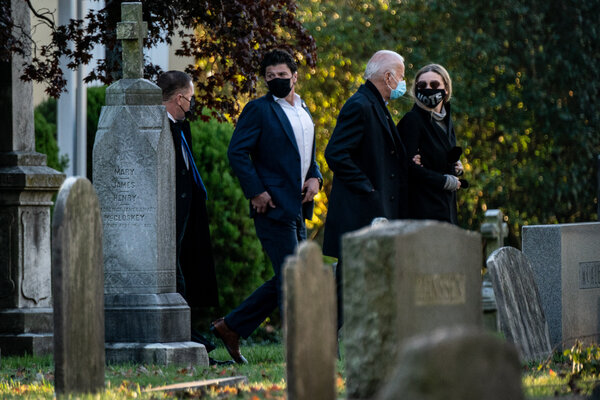 The Bidens then left to fly to Pennsylvania, where Mr. Biden planned to spend the day in Scranton and Philadelphia, a city where he needs substantial in-person turnout. This evening, he plans to return to his home state of Delaware, which he represented in the U.S. Senate for decades, to address the nation later tonight. Mr. Biden, his team has made clear, plans to speak regardless of how President Trump responds to the developments unfolding.

Mr. Biden was born in Scranton and lived there until he was 10 years old, and his Scranton roots are a core part of his political identity. He has framed the presidential race as a choice between Scranton and Park Avenue, as he portrays President Trump as concerned only about the rich.

Tuesday is the third straight day that Mr. Biden is campaigning in Pennsylvania.