MPs and civil liberties groups have hit out at plans to require voters to provide proof of identity when casting a ballot, with Labour describing them as “cynical and ugly”.

A number of measures to tackle voting fraud are expected to be introduced by the government in Tuesday’s Queen’s Speech, including on voter ID.

At the moment, people only have to walk into a polling station and give their name and address to vote. 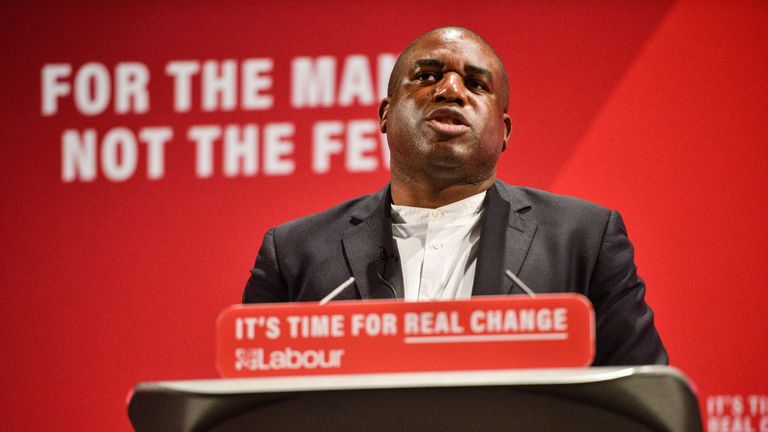 Downing Street said the move was a “reasonable approach” and 99.6% of people in ID pilots had voted without difficulty.

But Labour’s shadow justice secretary David Lammy has criticised the plans to require people to provide identification in the future.

He said: “In the 2019 election, there was just one conviction for voter fraud. 3.5 million British citizens do not have a photo ID.

“This is a cynical and ugly attempt to rig the system to disempower the poorest and most marginalised groups.”

Conservative former cabinet minister David Davis has also voiced his opposition, describing the move as an “illiberal solution for a non-existent problem”.

Jess Garland, director of policy and research at the Electoral Reform Society, said: “Voting is safe and secure in the UK, meaning this policy is just an unnecessary barrier to democratic participation. Ministers need to listen to these concerns and drop these costly plans.”

Sam Grant, head of policy and campaigns at Liberty, said: “Instead of creating more barriers to voting, ministers should focus on making it easier for everyone to vote, and ensuring we can all have an equal say in our democratic process.

“As there is no justification for this threat to the right to vote, it feels like an opportunistic attack on the rights of some of the most marginalised people in society, a classic example of ruling through division and distrust.”

Chloe Smith, minister for the constitution and devolution, said the legislation was designed to “stamp out” fraud.

“Stealing someone’s vote is stealing their voice. Fraud, and the intent to intimidate or coerce a voter, are crimes,” she said.

“So this government is stamping out the space for such damage to take place in our elections.”

Defending the plans, the prime minister’s official spokesman said: “Showing ID to vote is a reasonable approach to combat the inexcusable potential for voter fraud in our current system and to strengthen the integrity of our elections.

“Showing ID is something people do when they pick up a parcel at the post office or a library book.

“The 2019 voter ID pilots showed that in elections where photo ID was required, 99.6% of electors were able to cast their votes without a problem.”

Voter ID pilots have been held in recent years, including at local elections in 2019.

The Electoral Commission said that in the areas that took part, the proportion of people who initially did not bring the right identification and then did not return ranged from 0.03% of all polling station voters in one council area to 0.7% in two other areas.

The commission said that it could not “draw definitive conclusions” from the pilots “about how an ID requirement would work in practice, particularly at a national poll with higher levels of turnout or in areas with different socio-demographic profiles not fully represented in the pilot scheme”.

As well as introducing voter ID, the government will tighten the rules around absent voting and voter intimidation.

A ban on postal vote harvesting will be introduced, limiting the number of votes a person can hand in at a polling station on behalf of others.

Voter intimidation will be listed as a form of undue influence in law, in a bid to stop people from being coerced into giving up control over their vote. Other measures set to be included in the Queen’s Speech are:

– A Police, Crime, Sentencing and Courts Bill to give police in England and Wales more powers to curtail protests

– An Environment Bill to set new, legally-binding climate targets ahead of the Cop26 climate change summit in Glasgow later this year.

– Proposals to reform adult social care may also be set out. Michael Gove said at the weekend that a plan will be “heading for the statute books” by the end of the year.

– A Health and Care Bill to implement planned changes to structure of the NHS in England.

– In a bid to boost housebuilding, a planning bill will relax controls in England.

– A Sovereign Borders Bill will overhaul the asylum system to try and deter migrants from crossing the Channel.

– Ministers have said they will repeal the Fixed-term Parliaments Act introduced under David Cameron and bring back the prerogative power to call early elections.

– A Building Safety Bill will introduce a new regime of safety regulations and inspections for buildings under construction in the aftermath of the 2017 Grenfell Tower fire.

– Legislation to limit future prosecutions of British soldiers who served during the Troubles in Northern Ireland is anticipated. According to reports, it may also cover paramilitaries.