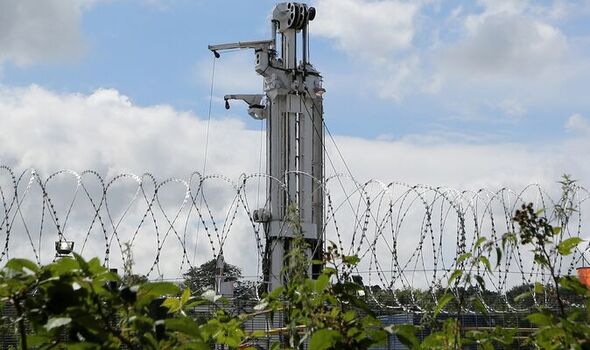 With the nation facing soaring energy bills and a cost of living crisis, 52 percent of people say they support “maximising” fossil fuels until the country can be powered from renewable sources. The research by Redfield & Wilton Strategies comes as business leaders and economists have urged the Government to harness underground natural gas by giving the green light to fracking. They warn that inflation is rising and expect the war in Ukraine to push prices even higher.

The Government last week unveiled an energy strategy which sets out ambitions for as many as eight new nuclear reactors and more offshore wind farms but pressure is growing for immediate action to bring down bills.

An open letter – which you can read in full below this article – signed by figures including Wetherspoons chairman Tim Martin, consumer goods entrepreneur John Mills, former director-general of the British Chambers of Commerce John Longworth, and economist Roger Bootle states: “The United Kingdom has enough natural gas to take back control of our energy policy at least until we have developed nuclear energy and beyond. If we were to release just 10 percent of British natural shale gas the UK would be self-sufficient in energy for the next 30 years.

“This would ease the burden on families and businesses as the British economy transitions to net-zero. We are therefore calling on the government to lift the moratorium on shale gas exploration in the UK.”

Fracking was halted in the UK in 2019 but the Government has commissioned a new report into this controversial method of obtaining gas through “hydraulic fracturing”.

Mr Longworth, who now chairs the Independent Business Network, hopes that if fracking gets a green light right away “we will begin to see the pressure on prices ease by next winter and become progressively better each year after that”.

He said: “Immediately, the Government should be doing everything possible to incentivise and secure for Britain energy at least cost; that means pumping more reserves of gas and oil from the North Sea and right now starting to frack gas under our feet and using emergency measures to drive through the planning system the expansion of the extraction of British natural shale gas.”

The push for highly controversial action comes as concern mounts about the impact of higher bills on household finances. A Liberal Democrat analysis suggest families will face an “extra £1,400 hit to their utility bills over the next decade” – with more than half the sum coming from the cost of the new nuclear power plants.

There is deep unease in Tory circles about how living costs may affect the party’s chances at the next election.

A backbencher described the country’s energy policy as “50 years of failure,” saying: “We’ve closed all our pits. We’ve refused to frack.

“Forget everything that’s happened over the last two and a half years. The one thing that will define us as a party and as a government is the cost of living, pounds in pockets. People, come the next election, if they feel worse off than they did in 2019, then they will look to punish us. It’s as simple as that.”

The hardships facing families may be fuelling pessimism about the life chances of younger generations.

The Redfield & Wilson research asked people in Great Britain if the “children of today live in a better United Kingdom with a more optimistic future than the one their parents grew up in”. Nearly two-thirds of respondents (63 percent) said No.

Craig Mackinlay, the South Thanet Conservative MP, who set up the Net Zero Scrutiny Group to examine the Government’s plans to slash carbon emissions, pressed for immediate action to bring down bills.