Unveiling her “back to basics” law-and-order package, the no-nonsense Tory frontrunner promised every burglary victim will be visited by an officer. The Foreign Secretary also pledged to introduce tough targets to ensure serious criminals are brought to justice.

She will today set out her crime-fighting package in her battle with former Chancellor Rishi Sunak to succeed Boris Johnson as Tory leader and Prime Minister.

Party grassroots members begin voting in the final head-to-head phase of the contest next week.

At the heart of Ms Truss’s plans will be an expectation on the police to cut killings, other serious violence and neighbourhood crime by 20 per cent before the end of this Parliamentary term, currently no later than January 2025.

She will say that a Government under her leadership will publish regular league tables to show how forces perform against the UK trend.

The statistics – which are already collected – will provide transparency and encourage forces to improve. 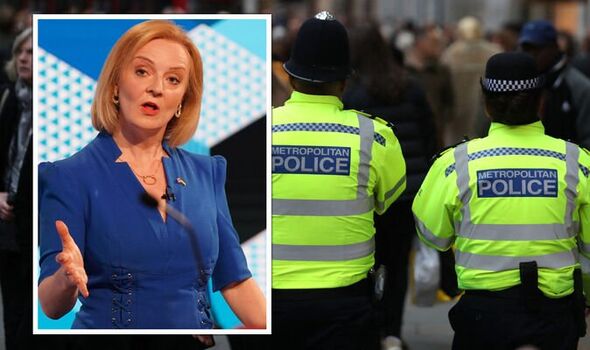 Chief constables of underperforming forces will have to detail their ideas to turn around the situation to ministers and other police leaders at a special meeting of the National Policing Board. The plans will be available for voters to scrutinise and to hold police to account.

A Truss campaign source said: “Burglars, thugs and murderers should expect to be taken off our streets and thrown behind bars.

“It’s unfortunate that some chief constables are not cracking down. Liz will hold their feet to the fire and these newly published statistics will help the public do the same.”

Ms Truss wants her ministers to work with police chiefs to improve victims’ experience of the criminal justice system. She will urge all units to copy the model pursued by some forces where every domestic burglary victim is visited by police.

Her aides say it helps prevention, detection – and public confidence.

Ms Truss also plans to give Police and Crime Commissioners greater powers to audit forces’ spending. This will include a veto on training focusing on “identity politics”. 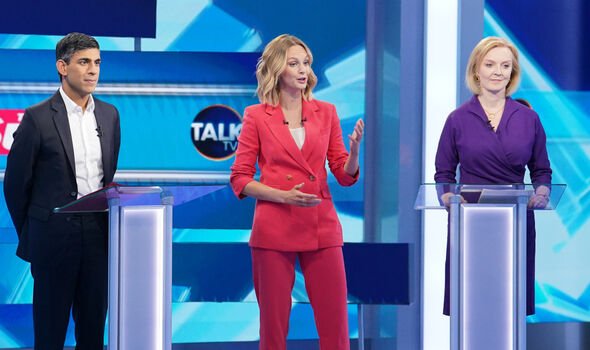 She will say officers’ learning and development must target key issues including domestic violence against women and girls. The favourite for the Tory leadership wants a code of practice which governs “non-crime hate incidents” to robustly defend free speech and ensures officers are policing streets, not online debates.

Her campaign team recognises Mr Johnson’s Government made “good progress” in delivering a manifesto commitment of 20,000 more police – and Ms Truss wants chief constables to ensure these officers are on the streets where their presence will help cut crime.

She said: “People across our country want criminals locked up, and crime prevented, so they feel safe. We and our fantastic Conservative Police and Crime Commissioners have made good progress since the 2019 election, with over 13,000 new police officers on the streets and the increase in powers and resources having a real impact in communities around the country.

“But we now need to go further and faster. It’s time for the police to get back to basics and spend their time investigating real crimes, not Twitter rows and hurt feelings.

“People can trust me to deliver and these league tables will help hold the police to account – making our streets safer and our country more prosperous.”

Last night Ms Truss – who had been campaigning in West Sussex and Hampshire – stepped up criticism of Mr Sunak’s tax plans.

She claimed a Government led by her former Cabinet colleague would be a “disaster” for homeowners, workers and businesses:

“Let’s be clear, his plan is to raise taxes. He is planning to raise taxes on corporations, putting our taxes up to the same level as France. That is going to put off people who want to invest in Britain.

“Less investment will mean fewer jobs, fewer opportunities, lower wages and lower productivity. So it’s cutting off our nose to spite our face.

“We promised in our manifesto not to raise National Insurance. That is why I would reverse that.”

Ms Truss added: “I also want to put money into people’s pockets. Our current [economic] policy is contractionary. And what that means is it will lead to a recession.

“That is why I want to keep taxes low, attract the investment, get the growth. That’s the best way to pay down our debt.”

The Conservatives have always been known as the party of law and order.

But it is difficult to imagine the Tories winning many votes on their record on crime over the past decade.

That is why the pledge by Liz Truss for a crackdown on criminals will be welcomed by those who feel they have been abandoned by the police. Her target of slashing crime by 20 per cent will be difficult to achieve. Chief constables will no doubt whinge about lacking resources. But Ms Truss is right to make fighting crime a top priority.

Confidence in the police has never been lower, with hundreds of thousands of serious crimes going unsolved every year.

Many experts and veterans of frontline policing lay much of the blame for the crisis at the door of former PM Theresa May. A total of 20,000 police officers disappeared off the streets during her time at the Home Office and No10.

She argued that the police service needed to shoulder its share of austerity cuts.

Boris Johnson and Priti Patel vowed to reverse the cuts but forces are struggling to find enough new recruits to make up the shortfall.

Upholding law and order was one of Margaret Thatcher’s core beliefs. She warned that if the police lost control then “swaggering violent” criminals would take over. The Iron Lady would approve of Ms Truss’s plan to rid Britain’s streets of the scum who blight our lives.