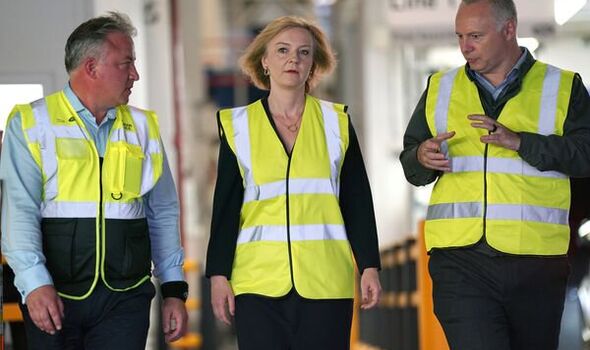 The Tory leadership frontrunner said the country’s problems mean it is time to be bold.

Energy bosses have warned a “catastrophic winter” is coming and half of households could be left in fuel poverty in January.

It comes as Conservative rival Rishi Sunak took another swipe at Ms Truss over her plans to ­prioritize tax cuts if she becomes the next Prime Minister.

But Ms Truss said fending off a recession is crucial. She said: “I am prepared to be bold as prime minister, I am prepared to do things differently and growing the economy is vital.

“Because if we do face a recession, that is a problem in terms of people’s incomes, in terms of jobs, so it is vital we keep taxes low and attract investment.”

Ms Truss who visited Jaguar Land Rover in Solihull yesterday added: “I will make sure people have more money in their ­pockets to deal with the very serious issues – whether it is food prices or fuel prices.”

“Secondly, I will make sure we deal with energy supply. That is about getting more gas out of the North Sea, it is about moving forward faster with things like nuclear energy.”

“What I am not about is a short-term sticking plaster.”

Mr Sunak said tax cuts “may sound attractive at first, but if they risk stoking inflation and actually do nothing to help poorer people and pensioners, then they actually are going to be bad for everyone”.

He added: “I think people know if something sounds too good to be true, it probably is.”

“I’d cut VAT on energy bills to provide some support to everyone, but I want to provide direct financial assistance to those on the lowest incomes and pensioners. With me as prime minister, they will get the help they need.”

Keith Anderson said the costs could be repaid over the next two ­decades. He said: “The most important thing is to stop this price ­hitting customers’ bills.

Consumers will find out on Friday how much the energy price cap will rise, with analysts expecting average annual bills to increase to more than £3,500.

He said: “In January half of UK households might be in fuel poverty. There is not only one lever to be pulled but all levers have to be pulled because we face a catastrophic winter.”