Seven in 10 Labour members believe Andy Burnham would make a better leader of the Labour Party than Sir Keir Starmer, according to an exclusive poll for Sky News.

The YouGov poll found 69% of Labour members would prefer the Manchester metro mayor to the present incumbent, even though he is not an MP and so could not stand in an immediate contest.

Grim findings for Sir Keir include 4 in 10 Labour members wanting him to stand down if he loses tomorrow’s by-election in West Yorkshire. 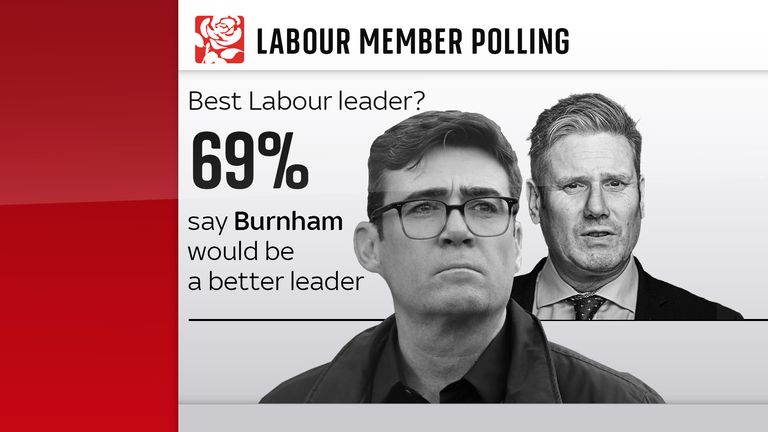 Meanwhile two-thirds of Labour members, 65%, believe Labour is now on course to lose the next general election with just 21% believing Labour are likely to win.

There are also signs that Labour members in the north of England have less faith in Sir Keir than other parts of the country.

The poll of 871 Labour members by YouGov taken over the last week suggests the party should brace for internal turmoil if it loses in Batley and Spen tomorrow.

Labour holds the seat by the comparatively slender margin of 3,525 votes and faces a challenge from former Labour MP George Galloway who is draining votes from the large British Asian population in the seat. The vacancy was triggered after Labour chose the existing Batley and Spen MP Tracey Brabin to stand for the West Yorkshire mayoralty, a position which she won last month. The fact Labour has chosen to hold this by election, which is now hanging in the balance, will trigger questions about the grip Sir Keir has over his operation.

Last month Labour lost the Labour seat of Hartlepool in a by-election, the first time that seat had fallen into Tory hands.

The grim backdrop for the by-election is likely to raise questions over whether Mr Starmer should stay in post, an issue already being posed by some on the left.

The poll sought the views of Labour members, people who pay up to £50 a year for membership and vote in leadership contests, so they should in theory be the party’s biggest cheerleaders. Labour members in the north of England take an even more critical view. If he loses in Batley and Spen then 50% of northern Labour members want him to quit against 42% wanting him to stay. This is a warning signal that Sir Keir could struggle to retake Red Wall areas lost at the last election if he does not even enthuse Labour activists.

In the event of a sudden leadership contest drawn from existing MPs, home affairs select committee chair Yvette Cooper would get the highest level of support of members with 35% of Labour members saying she would get their first preference. The Labour leader outperformed his newly appointed shadow chancellor Rachel Reeves, who saw 53% saying she was doing well. Less than half of Labour members in northern England, 47%, say Sir Keir is doing well.

Sir Keir is under pressure to readmit his predecessor to the parliamentary Labour Party, with 60% wanting Jeremy Corbyn back in.

Almost two-thirds of Labour members think the leadership should be announcing more detailed policies while 51% want the party to keep most of Mr Corbyn’s policy platform from the last election.