Nicola Sturgeon spoke to the Scottish Parliament’s Committee during an inquiry into the Government’s conduct following complaints against former First Minister Alex Salmond. MSP Margaret Mitchell highlighted the importance of the Government being clear with their conduct and noted the SNP Government had failed in some areas of this. She said: “The Government knew exactly what information we required and had already provided some of it.

“Despite this, in December last year, 288 complaint handling documents were sent to this committee asked for 6 months before.

“Generally we have faced delay, obstruction, obfuscation and still not received some information that is crucial to our enquiry.

“Is that acceptable First Minister?”

Ms Sturgeon argued she would consider that behaviour problematic however noted that she did not believe this was the case of her Government in this instance. 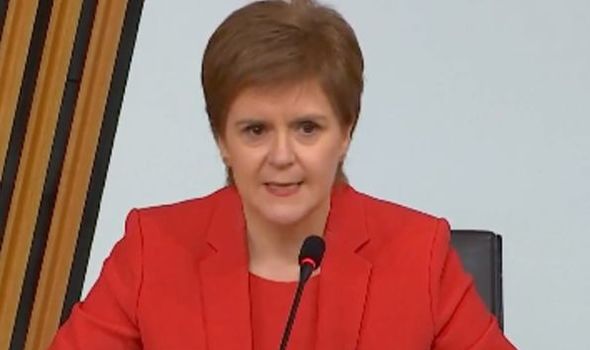 She replied: “At the outset of this investigation I recused myself from the Government’s handling of it because I thought it was appropriate.

“The Government has made available substantial amounts of oral and written evidence.

“I am not aware of what you are referring to that is in the Government’s control, that you still feel we haven’t handed over.

“I am sure there will be attempts made to rectify that.”

She added: “There is no intention on the part of the Government to withhold relevant information from this committee.”

Ms Mitchell however insisted the inquiry delay has been because the Government has withheld information and could have given the information when it was asked.

Ms Sturgeon reiterated her commitment to being as transparent as possible and helping the committee with their investigation where possible.

She continued: “I will share some of the frustration, I understand why this is the case so it is not intended to be a criticism of the committee, I have waited a long time to be sitting her myself.

“This is while allegations and claims have been swirling about me without me having the ability to address them.”