BESSEMER, Ala. — The first time Darryl Richardson tried to start a union, he was 23 years old and virtually alone in the effort. It failed, he lost his job, and he remembers the lasting fears of other employees who worried they would suffer a similar fate.

Nearly 30 years later, Mr. Richardson’s penchant for agitation has not faded. He’s one of the workers seeking to unionize an Amazon warehouse outside Birmingham, Ala., in a campaign that has targeted one of the world’s most profitable companies and its billionaire chief executive, and that has been invigorated by a wave of support from prominent politicians, including President Biden.

“I couldn’t believe he said something,” Mr. Richardson said of Mr. Biden’s video message last week in which he affirmed workers’ rights and warned against corporate intimidation. “It matters. It eased minds that might be worried about losing their job.”

Mike Foster, one of the lead organizers for the union, was less surprised. “We’ve been waiting on him,” he said.

When Mr. Biden weighed in on the contentious union debate in Alabama — which has pitted company against worker and neighbor against neighbor as a potentially broader labor push brews at a corporation that has long resisted similar efforts — he showed a new side of his nascent presidency.

His words demonstrated a willingness to use his bully pulpit on behalf of communities that have often fallen outside the Democratic Party’s governing focus: working-class voters in Republican states, many of whom are Black. The message also elevated the national debate about the future of labor and unions, a cross-ideological issue on which Mr. Biden can uniquely find common cause with the progressive wing of his party even as many Democrats continue to shy away.

Mr. Biden’s statement did not mention Amazon specifically and carefully avoided backing the union, calling instead for a fair election that followed federal labor guidelines. Still, for union supporters in Alabama, a state used to being on the back burner of national and Democratic politics, Mr. Biden’s video was taken as a sign that his pledges to pursue racial equity and curb corporate power were more than just campaign catchphrases.

What’s more, the presidential nod to Alabama supercharged the Democratic arms race to find the next Georgia, a Southern state where the party capitalized on decades of organizing and demographic change to break Republicans’ grip on statewide elections.

The task will be tougher in Alabama: The state is much more firmly Republican than its Southern neighbor, having ousted the incumbent Senator Doug Jones, a Democrat, by a healthy margin in 2020. The state has also not experienced the rapid demographic change that has made Georgia’s political transformation possible, and does not have its considerable numbers of college-educated suburban moderates.

Still, Alabama Democrats see the growth of unions — and the vote in Bessemer — as a crucial first step. In that way, the blue banners hanging on the warehouse’s walls that read “vote” are about much more than a union, even if the larger effort faces greater odds.

“Watching what happened in Georgia has given people a lot of hope,” said Kathleen Kirkpatrick, the political director of Hometown Action, a statewide activist group. “What Stacey Abrams did started a decade ago and took a lot of help. So let’s think about where we are on that path.”

Faiz Shakir, a close ally of labor leaders and served as the campaign manager for Senator Bernie Sanders’s 2020 presidential bid, called Mr. Biden’s video “very impactful.” Mr. Shakir said he recalled how, on the campaign trail, he had often felt that labor issues were where there was the least amount of daylight between the progressive Mr. Sanders and the moderate Mr. Biden. 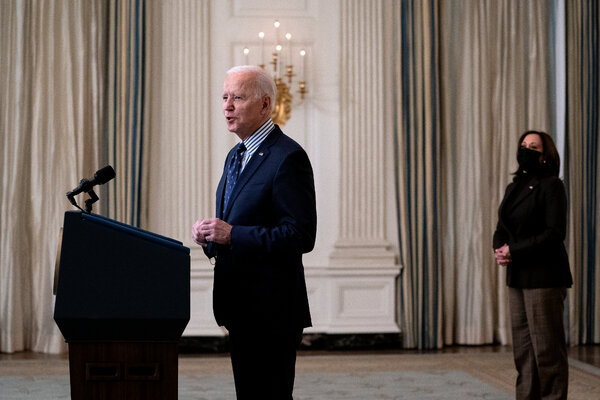 Mr. Shakir said he had privately lobbied Ron Klain, the White House chief of staff, to persuade Mr. Biden to speak out. And in a sign of the potential kinship between Mr. Klain and the left on labor, Mr. Shakir said he believed the president would have chosen Mr. Sanders as labor secretary if the Senate had not been split 50-50, making confirmations more difficult.

“We have disagreed with him on health care and maybe climate and some other pieces, but there’s some good ideological overlap on this one,” Mr. Shakir said, noting that Mr. Biden’s general-election platform had been more progressive than his stances were in the primary race. Mr. Biden has, to this point, ignored progressive calls to embrace breaking up big technology companies like Amazon.

“I can understand people were dubious about whether that was sincere or not, but our track record with Ron, with Joe Biden, and with the whole team is that when they say they’re going to do something, they will contemplate whether they want to make that commitment,” Mr. Shakir said. “And if they do make the commitment, that’s where they stand. They’re straightforward.”

Although labor leaders, local union activists and national progressive politicians uniformly support an Amazon union in Alabama, that feeling does not reflect the mood inside the warehouse itself. With less than a month to go in the union vote, the 5,800-worker warehouse is split among supporters of the union, strong dissenters and an apathetic center that is growing sick of the national attention.

Outside the plant — where some workers clock 12-hour shifts — union activists and journalists are likely to experience a string of exasperated rejections when asking to speak with employees. Some workers wear “Vote No” pins, while others talk of anti-union literature in the common areas and bathrooms. And on social media, employees post about longing for March 29, when the election will conclude.

Amazon has aggressively countered the unionization effort, highlighting the company’s benefit package and its $15 minimum wage, as well as the job growth it has prompted in an economically stagnant area of the South.

Last week, in a media round table of anti-union warehouse workers hosted by Amazon, some said that Mr. Biden’s message had been unnecessary, and that they did not feel intimidated by the company. A spokeswoman for Amazon declined to directly comment on the president’s remarks.

“I know the president weighed in,” said J.C. Thompson, a process assistant at the warehouse. “And I can’t imagine the pressure our leadership is feeling because there’s a few people — a minority — who are disgruntled.”

Carla Johnson, an employee in the warehouse, said she was voting not to unionize.

“I can speak for myself,” she said. “I don’t need someone from the outside coming in and saying this or that.”

The range of opinions hinted at why Mr. Biden’s message was so calibrated — supporting the workers’ right to a fair election but not supporting the union itself. And some observers, including employees at the Amazon warehouse, believe the president’s words will have little bearing on the outcome of the union vote.

Catherine Highsmith, 24, said she would wager that some employees were not aware that the president had said anything. She sees his support for the workers as less important than parts of his agenda that remain unfulfilled, including raising the federal minimum wage and sending robust stimulus checks to Americans.

“It’s a words versus actions thing,” Ms. Highsmith said. “It’s doesn’t feel right for me to say ‘thanks for helping me’ when you still have to help others.”

Outsiders may see Bessemer as an unlikely place for a union showdown, but many residents disagree. This southwestern Birmingham suburb of about 25,000 people has a history of unionized iron and limestone workers. As jobs moved out the area in the 1950s, however, the city fell into poverty and despair, ranking sixth on a list in 2019 of the worst places to live in America.

Last year, when Amazon opened the warehouse to the praises of local elected officials, the company hailed its arrival as a sign of economic revival in a predominantly Black area. With the coronavirus pandemic raging, Amazon offered thousands of jobs at a minimum wage of at least $15 an hour, more than double the state’s minimum. Some hailed it as a godsend.

But by the fall, Mr. Richardson and others had already contacted the regional chapter of the Retail, Wholesale, and Department Store Union with complaints of poor working conditions, inflexible hours and a lack of coordinated representation in management.

Liberal organizations seeking to make inroads in local politics have latched on to the union fight. The Alabama Coalition for Community Benefits, a collective of labor groups, progressive grass-roots organizations and civil rights stalwarts like the N.A.A.C.P., has supported the pro-unionization workers in Bessemer, and is also organizing employees at a nearby plant for the bus maker New Flyer.

Mr. Foster, one of the R.W.D.S.U. organizers in Bessemer, who works as a poultry processor at another company’s plant, said the efforts were indicative of a growing labor movement in the South, even in states that have passed strict right-to-work laws that ban mandatory union membership as a condition of employment.

The political groups see something more, an outgrowth of the organizing that exploded during Donald J. Trump’s presidency. Millions of dollars poured into Alabama during the 2017 special election for the Senate in which Mr. Jones became the first Democrat to hold one of the state’s seats in the chamber since 1997. He lost his re-election bid last year, but Ms. Kirkpatrick argued that the union efforts were proof that the organizing infrastructure had lived on.

“The legacy of union sensibilities in Alabama maybe don’t follow along partisan lines,” she said. “So regardless of the outcome, one of the things that we really did see over the course of the last three to four years was Democrats and progressive Democrats coming out of the woodwork. Waking up and realizing they weren’t the only person on the block in the retail workplace who has a progressive mind-set.”

On Friday, several congressional Democrats traveled to Bessemer to support the Amazon workers. Representative Andy Levin of Michigan, a former union organizer, said it was “the most important election for the working people of this country in my lifetime.”

“There is nothing I have done in Congress that is more important than standing here today and giving a little solidarity to these workers and their struggle for justice,” Mr. Levin said.

But the national political implications matter less to people like Mr. Richardson and Ms. Highsmith, who believe a union is necessary to improve their daily working conditions. When thousands of Twitter users started a #BoycottAmazon campaign last week in solidarity with the union efforts, the R.W.D.S.U. and local union organizers distanced themselves from the campaign, choosing to keep their focus on Bessemer.

While liberal activists in Alabama see an opportunity to reshape the state’s politics, and national progressives seize on a shared priority with Mr. Biden’s administration, Mr. Richardson just wants to be able to take a long bathroom break without the fear of having his pay docked.

“We’re taking on Goliath,” he said. “And the president has our back.”