PHOENIX — The political fortunes of Katie Hobbs, the Arizona secretary of state, have risen unlike any other Democrat in the country in the tumultuous aftermath of the 2020 presidential election. Now running for governor, she has emerged as a high-profile defender of the state’s election results and critic of Republican attempts to overturn the outcome.

Her path stands in stark contrast to that of another prominent Arizona Democrat: Senator Kyrsten Sinema, a self-styled maverick who seems to relish thumbing her nose at liberals and has angered many Democrats in recent weeks.

Insisting on bipartisanship, Ms. Sinema has become, along with Senator Joe Manchin III of West Virginia, a key intraparty roadblock to President Biden’s agenda. This week, all eyes in Washington have been on Ms. Sinema and other moderate senators as they pursue a bipartisan infrastructure bill. But by refusing to eliminate the filibuster, she and other Democratic senators have left in doubt the passage of sweeping voting rights legislation that many on the left view as of utmost importance in the face of a nationwide Republican crackdown.

Ms. Hobbs, by contrast, has gained newfound fame in her party for facing down withering attacks from Republicans — including death threats against her and her family that prompted round-the-clock security from state troopers — and for denouncing a widely criticized G.O.P. audit of votes in the state’s largest county as a sham and a threat to democracy. Now she is the most popular statewide elected official, according to some polls, and is starting a bid for governor with more than $1 million in her campaign’s coffers.

Ms. Hobbs’s position is unique in part because several other elected officials who defended results at key moments in contested states like Georgia and Michigan were Republican — but in Arizona, the secretary of state was an ambitious Democrat enthusiastic about making headlines.

“If things had gone differently with the election, or the amount of exposure that I got after the election, I don’t feel like I would be in such a strong position,” Ms. Hobbs said in an interview in a Phoenix coffee shop. “I certainly don’t think that things would be going as well as they are so far.”

Democrats’ sharply divergent views of Ms. Hobbs and Ms. Sinema illustrate the party’s divisions over how to best press its advantage in Arizona, a once reliably Republican battleground that Mr. Biden narrowly flipped last year, as well as its differences over how to approach the partisan battle over voting rights and restrictions.

Some Democrats, like Ms. Hobbs, want to aggressively confront Republicans to counteract the wave of G.O.P. voting restrictions being enacted across the country. But others, including Ms. Sinema, are reluctant to take drastic actions, like abolishing the Senate filibuster, that would be required to pass the party’s big voting bills, and they are hopeful of finding elusive compromise with Republicans. 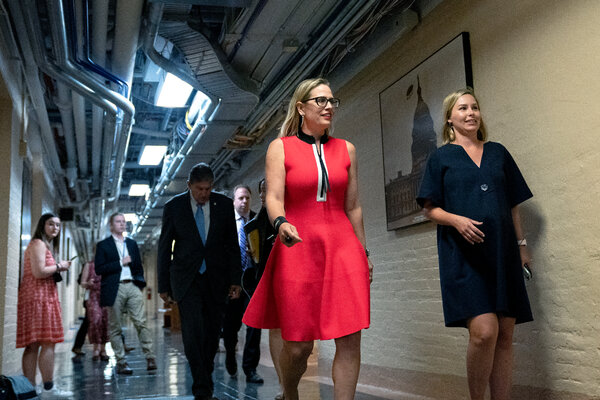 The question is especially difficult for Democrats in Arizona’s uncertain political terrain, with Republicans continuing their recount there despite widespread condemnation. While the majority of voters in the state tell pollsters they oppose the audit, roughly 40 percent say they support it, a reflection of how deeply former President Donald J. Trump’s election falsehoods continue to resonate. And it remains unclear just how independents, who make up about a third of all voters in the state, will appraise the hotly contested recount.

Ms. Sinema has appeared to make a political calculation that voters will not punish her for taking positions that make her a pariah among the most ardent Democrats, and Ms. Hobbs could face a difficult battle in the general election for governor if she scares away Republican voters.

Despite her rise amid the turmoil, Ms. Hobbs remains pragmatic about the persistent election conspiracy theories.

“Certainly no rational person would have thought we’d still be talking about it now,” she said. “We’ve been saying all along that the misinformation is dangerous — I don’t think anyone wanted to imagine how dangerous it is.”

In such a national environment, it has become all but impossible to reach the type of bipartisan consensus upon which Ms. Sinema has staked her career and reputation.

Much of Democrats’ scrutiny of the senator stems from her defense of the filibuster, a procedural tactic that currently allows Republicans to block most of their rivals’ legislative proposals. Ms. Sinema argues that the filibuster is essential for American governance.

“It is a tool that protects the democracy of our nation, rather than allowing our country to ricochet wildly every two to four years back and forth between policies,” Ms. Sinema said this month, standing alongside Senator John Cornyn, a Republican, in his home state, Texas. “I think I am a daily example that bipartisanship is possible,” she added, suggesting that other senators should change their behavior, rather than “eliminate the rules or change the rules.”

Last week, Arizona Democrats signed a letter urging Ms. Sinema to reform the filibuster — apparently conceding that she would not reverse her position and move to abolish it entirely. And this week, Ms. Hobbs wrote a guest essay in The Washington Post urging Ms. Sinema to support the For the People Act, the broader of Democrats’ two big federal voting bills, arguing that “we both know that if we do nothing now, Arizonans’ access to the ballot will be stripped away by Republican legislators.” (Mr. Manchin’s opposition to the broader bill means that Democrats do not currently have the votes even without the filibuster.)

For many political veterans in the state, Ms. Sinema’s stance is hardly surprising, given that she has worked with Republicans throughout her career. But many activists are furious that she has not shifted her position with Democrats now in control of the House, Senate and White House, and Republicans repeatedly blocking their legislation. Activists have openly talked about recruiting a challenger to Ms. Sinema in the primary race for her seat in 2024, when she is up for re-election.

“Senator Sinema’s leadership has been deeply disappointing,” said Alejandra Gomez, a co-executive director of Lucha, a civil rights group that has helped several Democrats win in the state. “What’s very clear is that now that we have a majority, she does not know how to govern. She does not know how to take advantage and be nimble.”

Arizona is roughly evenly split among Democratic, Republican and independent voters. And both Ms. Sinema and Ms. Hobbs were elected thanks to coalitions of moderate independents and progressive activists whose get-out-the-vote efforts have shifted the state to the left. (Aides to Ms. Sinema point out that all of the Democrats who have won statewide elections in recent years have billed themselves as moderates.)

Historically, Ms. Hobbs and Ms. Sinema share a similar approach and background — both worked as social workers before entering politics and have built reputations as bipartisan dealmakers. In the past, Ms. Sinema was something of a mentor to Ms. Hobbs, encouraging her to run for office and ascend in state politics.

But Ms. Hobbs has distanced herself from Ms. Sinema in recent weeks. And many activists on the left see the potential for the secretary of state to become something that the senator is not: a political leader powered in part by constituents’ frustration. Some of Ms. Hobbs’s early success suggests that anger at Republicans is fueling her campaign — she has said that her strong fund-raising of more than $1 million in the last six months probably would not have been possible without the recount. Nearly every time she is attacked by Mr. Trump or other prominent Republicans, she said, her donations surge.

And Ms. Hobbs has acknowledged that she cannot win her bid for governor without support from the left.

“I’m someone who will always acknowledge the people that helped me get where I am,” she said. “I’m not going to turn my back on people.”

Ms. Hobbs will face at least one opponent in the Democratic primary, and Ms. Gomez said that the candidate could secure support from the left only if she made clear that she would “take bold action and lead in a visionary way, to disrupt the Arizona of the past — not hiding behind bipartisanship.”

But as Ms. Hobbs has started to become a hero for the left in Arizona, Ms. Sinema is increasingly alienated from members of her own party.

“Every day I am telling activists and donors and Democrats that we need to make sure that we are voicing our opinions and voicing the agenda,” said Raquel Terán, a state representative and the chair of the Arizona Democratic Party. “But at the end of the day, we know we have a senator where it’s hard to say if she’s going to move. The part for us right now is that we raise our opinion and express our position. We’re going to have to fight hard and make sure that nothing is off the table.”

While some progressive activists have all but given up on Ms. Sinema, others are more optimistic that protest and pressure will prompt her to shift her approach, particularly if she hears from more moderate voters.

Susan Minato, a co-president of Unite Here Local 11, which represents hospitality workers in Arizona, said she was urging Ms. Sinema to host a town hall event during the upcoming summer break from Congress. Such an approach would be unusual for a senator who rarely appears at unscripted events or takes questions from reporters (her office declined to make her available for this article.)

“We’re very worried about our country, and she needs to begin to listen to understand why,” Ms. Minato said. “The jury is still out on whether we can change her mind. We’re not in a fight with Senator Sinema. We’re in a fight for democracy, and we’re in it for the long haul.”