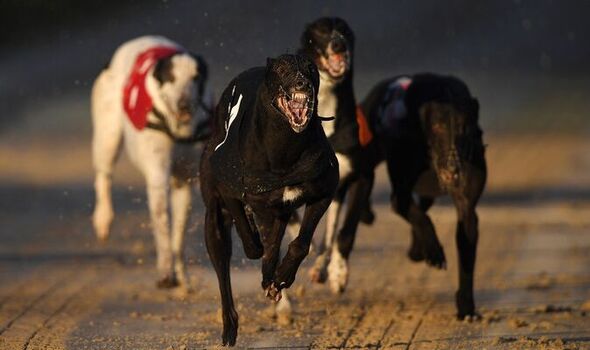 The debate got the green light after a petition calling for a ban received nearly 105,000 signatures. Opponents of the sport say that greyhounds endure “unavoidable suffering” and are forced to race for “worldwide betting markets”. The Alliance Against Greyhound (AARG) racing, which organised the petition, claims that “negotiating tight bends at high speeds puts enormous pressure on their limbs resulting in fractures and torn tendons and ligaments” and says the “fractures are so specific to racing greyhounds that they are rarely seen in other breeds of dogs”.

The AARG argues the time has come for a full ban, stating: “No amount of welfare tweaking can change the reality of greyhounds being injured – nor the fact that dogs as young as two or three are routinely discarded by the industry each year to face uncertain futures. The British public has had enough.

“This debate is an unprecedented opportunity to examine why an outdated pursuit like dog racing – now only legal in a handful of countries – has no place anymore in a modern animal loving society like that of Great Britain.”

However, Mark Bird, chief executive of the Greyhound Board of Great Britain (GBGB), which regulates licensed greyhound racing, insisted the welfare of dogs was “absolutely paramount”.

He said: “Any sort of ban on licensed greyhound racing would have devastating consequences economically, socially and in terms of animal welfare. Through the loss of thousands of jobs, a ban would cause immense economic damage to areas of the country already associated with social deprivation and unemployment. But, of most concern, there would be a significant welfare crisis in terms of homing thousands of greyhounds.”

The board says the British greyhound industry has an estimated turnover of £2.6billion and employs more than 7,000 people across the country. It says the number of greyhounds put to sleep across the sport has fallen from 710 in 2019 to 411 in 2020 (including sudden/natural deaths), with injuries going down from 4,970 to 3,575.

Highlighting the board’s greyhound retirement scheme – which “seeks to ensure the financial costs of homing a greyhound upon retirement are met before their racing career even begins” – Mr Bird said: “In 18 months, over £2 million has been paid out through the scheme benefitting over 5,000 greyhounds.”

However, groups around the world want the sport to come to an end in the UK.

Christine A Dorchak, president of the group GREY2K USA Worldwide, said: “Public opinion has turned against this outdated form of entertainment and, since 2001, 44 American facilities have closed their doors – dog racing will soon end entirely in the country of its origin.”

A spokeswoman for the Italian-headquartered International Organisation for Animal Protection, said: “Greyhounds are shamelessly bred and exploited for the only purpose of wagering on their life… They are sentient beings and this industry must stop.”

Britain’s Kennel Club is pushing for a “radical review of the industry” and made the case for a “mandatory Government levy on the sport” to ensure greyhounds are given the care they need during their racing lives and when they are rehomed.

Dr Samantha Gaines, the RSPCA’s dog welfare expert, said there “remain significant welfare issues which urgently need tackling to ensure that greyhound welfare is adequately safeguarded,” adding: “Alongside Dogs Trust, we have recently commissioned a review of racing greyhound welfare in the UK which will report in the first half of 2022. The review is being undertaken by an independent agency, with input from independent animal welfare experts, which will allow us to take an evidence-based position.