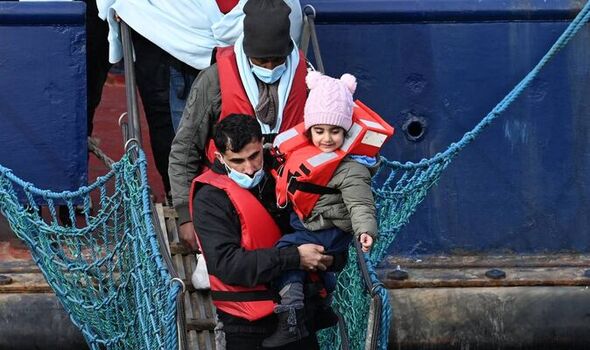 The business minister told GB News: “Last year, 28,500 people entered the country illegally across the Channel from France and 27 people died in that process. Clearly, the Government has to take action.

“That is why we’ve done this agreement with Rwanda – two sovereign countries making this agreement – and we think it will be effective in deterring people from making that perilous journey and clamping down in particular on the people smugglers who are profiting too much from human misery.”

Under an agreement struck with the Rwandan government, single male migrants will be flown to the African state for asylum claims to be processed.

In his Easter sermon, the Archbishop of Canterbury, Justin Welby, said the proposal was “the opposite of the nature of God who himself took responsibility for our failures”.

The Archbishop of York, Stephen Cottrell, added: “We can do better than this.”

Senior Tory MP Sir Roger Gale, a frequent critic of the Government, yesterday said: “I am gravely concerned about the ethics, the morality, the legality and, brutally, also the cost-effectiveness.”

Sir Roger said that while he may not know how to solve the problem, “we need an answer – but we need the right answer, and I don’t think this is it”.

Shadow policing minister Sarah Jones told Times Radio: “The Government hasn’t even said how much this is going to cost – the £120million is just an upfront payment to the Rwandan government.

“Sending people 4,000 miles before they’ve made a claim and expecting them to stay in a country they don’t want to be in is madness.

“We are just moving the people-smuggling problem, we are not fixing it, which is what the Government claims to try and do.”

Meanwhile, two large dinghies with around 90 people on board were brought into Dover Harbour by Border Force officials yesterday. The Ministry of Defence said 76 in two boats were rescued on Easter Sunday.