ATLANTA — President Trump’s attempt to undo the election results was undercut twice by fellow Republicans on Friday, as Georgia became the first contested state to certify Joseph R. Biden Jr.’s victory and Michigan lawmakers — after meeting with the president — said they would not intervene in their state’s election certification process.

After steady complaints by Mr. Trump about the Georgia vote count and a methodical hand recount, Georgia’s secretary of state, Brad Raffensperger, bluntly declared on Friday, “I live by the motto that numbers don’t lie,” and made official the final tally showing Mr. Biden had defeated Mr. Trump by 12,670 votes, out of roughly five million cast. Gov. Brian Kemp, also a Republican, tersely stated that he would sign the certification.

Hours later, a delegation of seven Michigan Republicans, who had met with Mr. Trump at the White House at his request, said they had no information “that would change the outcome of the election in Michigan.” Mr. Biden beat Mr. Trump in the state by nearly three percentage points.

“We will follow the law and follow the normal process regarding Michigan’s electors, just as we have said throughout this election,” the state’s top two Republican leaders said in a statement issued by the State Legislature.

“The candidates who win the most votes win elections and Michigan’s electoral votes,” the statement said. Mr. Trump’s outreach to state Republicans amid the ongoing vote certification process was condemned by Democrats and election law experts as a dangerous intrusion into the election process.

White House aides declined to respond to questions about the meeting.

Though Mr. Trump has tried mightily to stymie the process with ineffective lawsuits and false claims of fraud, his failure to bend lawmakers in Georgia and Michigan to his will signals a rapidly vanishing path for his corrosive efforts to subvert the nation’s election system.

Georgia’s certification is the leading edge of a series of battlegrounds that over the next five days could officially declare Mr. Biden the winner, with Michigan and Pennsylvania facing a deadline of Monday and Nevada scheduled to certify on Tuesday.

While the president met with Michigan lawmakers at the White House, Mr. Biden’s transition marched forward, despite the Trump administration’s refusal to cooperate with the transfer of power. The president-elect met with House Speaker Nancy Pelosi and Senator Chuck Schumer, the minority leader, and announced more senior staff appointments for his administration.

“In my Oval Office, me casa, you casa,” Mr. Biden said to the two Democratic congressional leaders. “I hope we’re going to spend a lot of time together.”

His campaign held a briefing with its senior adviser, Bob Bauer, who called Mr. Trump’s apparent efforts to influence Michigan officials into helping him overturn the state’s results “an abuse of office” and “absolutely appalling.”

On Thursday Mr. Biden issued his most forceful condemnation yet of Mr. Trump’s obstruction. “Incredibly damaging messages are being sent to the rest of the world about how democracy functions,” Mr. Biden said in remarks in Wilmington, Del. 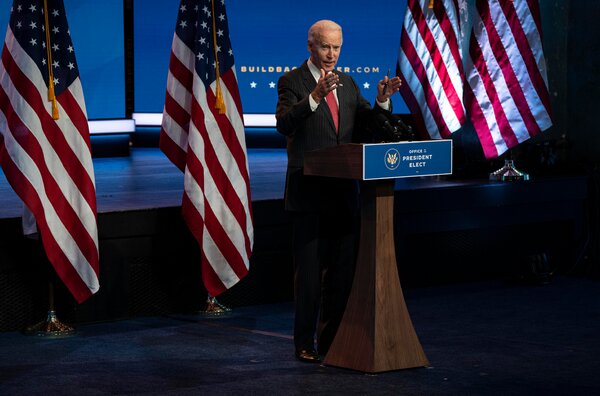 While Democrats and legal experts have denounced Mr. Trump’s attempt to overturn the results of the election, the vast majority of elected Republicans in Congress and statehouses around the country have either remained largely silent or have offered explicit support. Some, including Senator Lindsey Graham of South Carolina, have even joined the effort to advance Mr. Trump’s cause.

But on Friday, a few more Republicans broke with the president. Representative Kay Granger, a senior Texas Republican and ranking member of the Appropriations Committee, told CNN that she had “great concerns” about Mr. Trump’s actions and that “I think it’s time for him to really realize and be very clear about what’s going on.”

Senator Lamar Alexander, a retiring senator from Tennessee, said in a statement that the Trump administration needed to start participating in the transition process.

“If there is any chance whatsoever that Joe Biden will be the next president, and it looks like he has a very good chance, the Trump Administration should provide the Biden team with all transition materials, resources and meetings necessary to ensure a smooth transition so that both sides are ready on day one,” Mr. Alexander said. “That especially should be true, for example, on vaccine distribution.”

Their comments follow those of other Republicans who were more forceful in their criticism of the president on Thursday. Senator Mitt Romney of Utah said the president was trying to “subvert the will of the people,” and Gov. Larry Hogan of Maryland said it was “bad for the country and our standing in the world.”

Mr. Trump has continued to look for strategies to reverse the election result even though there is still no likely legal path for him to succeed. He has discussed with aides a dubious theory that if certification were delayed in states with Republican-controlled legislatures, the lawmakers might then name a new slate of electors more favorable to him.

But in Michigan, for instance, that appears nearly impossible. While the state canvassing board process is considered perfunctory once all 83 counties certify the results, at least one of the Republican members, Norm Shinkle, has indicated he may ask for an investigation. Any deadlock will most likely be taken to the state Court of Appeals, seeking an order to force the canvassing board to certify the election results.

If the board still refuses to certify after the court order, Gov. Gretchen Whitmer, a Democrat, could remove the members who refuse to certify, after a hearing, said Steve Liedel, an election law attorney from the Dykema Gossett firm in Lansing.

The delegation of seven Michigan lawmakers said in a statement by Mike Shirkey, the State Senate majority leader, and Lee Chatfield, the speaker of the Michigan House, that they had accepted the invitation from the president to push for additional federal funds to help in the fight against the coronavirus. But they also sent a message about what they stand for, at a moment when Michigan Republican officials are facing pressure from all sides on the vote count.

“Michigan’s certification process should be a deliberate process free from threats and intimidation,’’ the statement said. “Allegations of fraudulent behavior should be taken seriously, thoroughly investigated, and if proven, prosecuted to the full extent of the law. And the candidates who win the most votes win elections and Michigan’s electoral votes. These are simple truths that should provide confidence in our elections.”

Mr. Trump’s legal challenges have so far produced mostly losses and embarrassing missteps. An affidavit filed by Mr. Trump’s legal team intended to prove voter fraud in Michigan apparently used data taken from counties in Minnesota, the latest in a series of embarrassments that have made the president’s uphill legal fight even steeper.

In Wisconsin this week, the president turned to a reality-warping tactic he has used more commonly in attacks against news organizations, falsely describing a routine meeting of the state elections commission about recount rules and manuals as a shadowy, back-room ploy against him. The event, a standard step in the electoral process, was livestreamed.

During the recount in Dane County, Wis., on Friday, which was also livestreamed, the Trump campaign tried to object to every single ballot individually as it was brought up, forcing the three-member board of election officials there to simply accept that they were challenging all ballots en masse so as to speed up the process.

While the certification in Georgia signified a significant moment in securing the will of the state’s voters, it was not without some public hiccups. News of the certification was announced prematurely in a news release early on Friday, leading the secretary of state to have to issue a corrective statement.

Mr. Biden was able to flip Georgia, a state that had not voted for a Democratic presidential candidate since 1992, by winning with large margins in Atlanta and Savannah and performing significantly better than other recent Democratic candidates for president in the affluent and fast-growing suburban ring around Atlanta. But with a margin of victory within 0.25 percent, the state undertook a full, manual hand recount of the election, which it completed earlier this week.

Nonetheless, Mr. Raffensperger faced enormous pressure from prominent Republicans, including the president and Mr. Graham, to look hard for potential electoral fraud. The state’s two G.O.P. senators, Kelly Loeffler and David Perdue, staunch Trump allies who are engaged in tight runoff elections, called on Mr. Raffensperger to resign; they said his management of the process was an “embarrassment’’ and that he ‘‘failed to deliver honest and transparent elections.’’

But Mr. Raffensperger pushed back and defended the state’s electoral system, and issued his certification on Friday afternoon.

Soon afterward, Mr. Kemp indicated he would sign off on the certification, saying that “as governor I have a solemn responsibility to follow the law, and that is what I’ll continue to do.”

He added that signing the certification “paves the way for the Trump campaign to pursue other legal options in a separate recount if they choose.”

As of Friday night, the Trump campaign had not issued any formal indication about future challenges in Georgia. It has two business days to do so.