WASHINGTON — It began with a pair of firsts, one hopeful and one grim: The most diverse Congress in the nation’s history was sworn in two years ago during the longest government shutdown.

And on Sunday, the 116th Congress will end much as it began — filled with anticipation yet bitterly divided — having lurched through a cycle of once-in-a-generation moments packed into two years under President Trump. The shuttering of the government for more than a month. The impeachment and trial of a president. The deadliest pandemic in a century and a multitrillion-dollar federal response. A Supreme Court confirmation rushed through in the final weeks of the election.

“We have kind of gone from crisis to crisis, haven’t we?” Senator Rob Portman, Republican of Ohio, who is participating in a coronavirus vaccine trial in part to signal to his constituents that it would be safe to receive one. “Obviously, Covid is the biggest issue.”

Even with a few legislative accomplishments — among them, an overhaul of the North American trade agreement, enactment of landmark land conservation legislation and trillions of dollars in emergency economic aid to address the pandemic — partisan gridlock forced lawmakers to punt on their hopes that this Congress could be the one to do difficult things. The one that could alter a broken immigration system, overhaul policing and address gun violence and expand health care access and make it affordable.

Still, Congress made history of a different kind, ushering in a new era of governing through technology during the pandemic, with the House allowing proxy voting and both chambers adjusting to hearings and negotiations over Zoom.

Here are some of the moments that defined the 116th Congress.

Swearing In During a Shutdown

With one of the largest classes of newly elected lawmakers in congressional history, Speaker Nancy Pelosi of California became the first person in more than 60 years to reclaim the speakership after having lost it, recovering her distinction as the first woman to hold the post. The chamber where she assumed power better reflected the country in its diversity and youth. House rules were changed to allow head coverings on the floor — an adaptation reflecting the arrival of the first Muslim women to be sworn in — and the self-titled Squad of young progressive women of color was born. 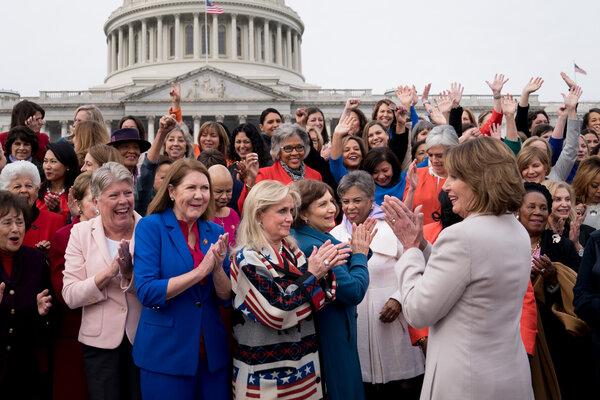 Within hours of her election as speaker, Ms. Pelosi began calling votes on legislation to reopen government agencies that had been closed since late December 2018, as Mr. Trump demanded more money for the border wall that had been his signature campaign promise.

“Imagine if you’re a new member,” Ms. Pelosi later recalled. “You come in with a government that is shut down. Then you have an active agenda.”

But Senate Republicans refused to consider the measure, even before it cleared the House. It set the predicate that would hold firm for most of the Congress: legislation triumphantly shepherded through by House Democrats would rarely be granted a vote on the Senate floor by Senator Mitch McConnell, Republican of Kentucky and the majority leader.

The shutdown ended after just over a month, with lawmakers in both parties essentially going around Mr. Trump and agreeing to a package that had far less money for the wall than he had demanded. But Mr. Trump would quickly declare a national emergency at the southwestern border, prompting months of bitter division over how to respond to his hard-line immigration policy.

An Impeachment, Then an Acquittal

Ms. Pelosi would spend months pushing back on the notion of impeachment before changing course after the president was accused of wrongdoing.

But in late August, an intelligence whistle-blower revealed that during a half-hour phone call in July, Mr. Trump had pressured Ukraine’s leader to investigate President-elect Joseph R. Biden Jr., just as the president was withholding millions of dollars in military assistance for the country.

Democrats who had resisted impeaching Mr. Trump swung into action, beginning five months of hearings and investigations that would yield additional details about Mr. Trump’s pressure campaign on Ukraine and growing calls for his removal. Even as they struck compromises on the overhaul of the North American Free Trade Agreement and a budget agreement, by Christmas, the House had voted to charge Mr. Trump with high crimes and misdemeanors, with Republicans unanimously opposed. It was the third impeachment of an American president in history.

“No Constitution can protect us if right doesn’t matter anymore, and you know you can’t trust this president to do what’s right for this country,” Representative Adam B. Schiff of California, the lead impeachment manager for House Democrats, warned during the Senate trial that followed. “You can trust he will do what’s right for Donald Trump.”

The outcome in the Senate was never in doubt, as most Republicans — including those who conceded the phone call was not as perfect as the president claimed it to be — quickly concluded that his actions did not warrant his removal.

Senator Mitt Romney of Utah, the lone Republican to find Mr. Trump guilty of abuse of power, deemed the impeachment trial among “the moments of great consequence" during his first two years in Congress.

“There are times when you stand alone — those are the moments that are most poignant and in some respects, most revealing to yourself about whether you have the courage of your conviction,” he said in an interview. He did not specify whether he was referring to impeachment.

‘Surreal’ Days in a Pandemic

Even as senators were spending hours each day sequestered in the chamber, top congressional leaders were beginning to conduct hearings on the spread of the novel coronavirus in China.

Within a month of Mr. Trump’s acquittal, the House approved what would be the first in a series of relief packages, culminating in the largest stimulus measures in modern American history.

As the pandemic spread to the Capitol, lawmakers raced to complete a $2.2 trillion stimulus law, shuttling through darkened hallways devoid of tourists and staff members as states and cities forced businesses and institutions to close their doors in efforts to slow the spread of the virus.

“Surreal is a good way to describe it,” said Senator Ron Wyden, Democrat of Oregon and one of the lawmakers who spent days huddled in a Senate office building negotiating the creation of relief programs. “When you’ve been in public service, sometimes you think you’ve seen most things. This was so different.”

By the end of 2020, nearly 10 percent of Congress had contracted the coronavirus, temporarily hospitalizing at least two lawmakers and forcing a number of lawmakers to quarantine.

Democrats moved to allow the House to vote remotely for the first time in the history of the chamber, instituting a system that would allow a lawmaker to have a colleague cast a vote for them by proxy if they were unable to travel.

Race to Fill the Supreme Court

As summer set in, the urgency of the pandemic gave way to deep paralysis on Capitol Hill driven by partisan differences. Efforts to pass another economic relief package stalled as Republicans resisted doing so and attempts to enact a federal overhaul of policing during a nationwide call for racial justice splintered as Democrats pushed for a more aggressive set of changes than Republicans were willing to consider.

But when Justice Ruth Bader Ginsburg died in late September, Republicans were determined to quickly fill her seat before an election that could cost Mr. Trump the presidency, or them their Senate majority — or both. Abandoning the position that had led them in 2016 to block President Barack Obama from filling a vacancy months before an election, Republicans rushed to push through the nomination of Judge Amy Coney Barrett, whom Mr. Trump introduced at a jubilant ceremony in the White House that was later determined to be a superspreader event, causing multiple senators to contract the virus.

By the end of the 116th Congress, nearly 150 judges were confirmed to the nation’s highest court, circuit courts and district courts across the country — all young, conservative and likely to shape interpretation of the nation’s laws for decades. Even as some Republicans began to break with Mr. Trump in anticipation of what both parties believed would be a punishing election result for their party, they enthusiastically rallied to support his Supreme Court nominee, a payoff after years of loyalty to the president.

Defying most expectations — including their own — House Republicans emerged with more than a dozen victories and a record 29 women in their ranks come January, according to the Center for American Women and Politics at Rutgers University.

It left Mr. Biden, who was declared the victor soon after, with a slim majority in the House and Democratic control of the Senate contingent on the outcomes of two runoff races in Georgia.

The political stakes of the contests helped shift the monthslong debate over providing pandemic relief to millions of unemployed Americans, small businesses, schools and hospitals across the country, prodding leaders into negotiations over another package.

Shortly after the November election, a group of moderates led by Senators Susan Collins, Republican of Maine, and Joe Manchin III, Democrat of West Virginia, began work on a compromise framework and jolted both chambers into a final round of frenzied negotiations. They finally yielded a $900 billion deal that passed both chambers days before Christmas after several near-misses with the prospect of yet another government shutdown.

Still, Mr. Trump threatened not to sign it, plunging the fate of the legislation into uncertainty and holding out the possibility of yet another government shutdown. Four days before the new year began, he signed it into law.

“I think divided government can be an opportunity,” Senator Lisa Murkowski, Republican of Alaska, said. “And how we take that up, how we choose to use it is up to us.”