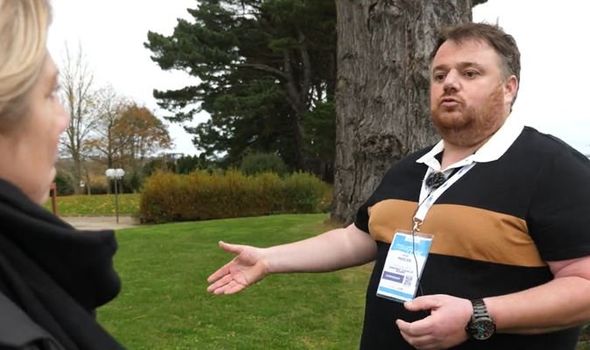 In a video produced by National Front MEP France Jamet at a recent fishing conference in Roscoff, Brittany, French Fishermen expressed their anger at a lack of access to British waters following Brexit. It comes amid a continuing row between the UK and France over fishing licenses.

One fisherman interview for the piece appeared to insinuate that the UK was more vulnerable to foreign interests procuring fishing quotas after it had left the EU.

However, these claims have been robustly denied to Express.co.uk by the Government and an industry expert.

In the video, Olivier Mercier, a shipowner and fisherman based out of La Rochelle-Hossegor, claimed: “I understand the English, but unfortunately, they risk being fooled.

“I think that the big winner will be the big Dutch industrialists who have already started buying small English boats.

“You can’t buy quota, but you can buy a boat and then take the quota and put it on another boat.

“A company buys small boats, transfers the quota from small to large, disposes of the small boats or destroys them.

“A large group can have access to an almost unlimited resource as long as it has funding.”

The video, posted by Ms Jamet on Twitter, has as of December 3 had around 2,800 views.

A spokesperson for the MMO told the Express: “Quota allocations are not attached to a vessel but to fishing licences and so buying a vessel is not a means to procure quota.

“Licences for small vessels (under 10m long) in the main do not have quota entitlements. Instead the MMO sets catch limits for these vessels from its pool of quota.”

Barrie Deas, CEO of the National Federation of Fishermen’s Organisations (NFFO), explained further that “this is not a new issue” and that the MMO was correct “in a narrow sense”.

He said: “Quota entitlement is attached to a licence, not the vessel.

“The licence can be purchased however, with or separate from the vessel. And FQAs [fixed quota allocations] can also change hands.

“Having said that, I don’t get the impression that there have been large scale changes in quota held by non-UK interests in recent years, or in fact decades.”

Mr Deas noted that some UK fishing assets were owned by Spanish, Dutch, Icelandic and Canadian nationals and companies.

This may have been because they were able to gain them before quotas were introduced in 1983, because they had purchased companies which hold licenses and quotas, or by buying quotas or leasing them on a short term basis – the latter being “quite common”.

He added: “Most of these developments took place in the 1980s and 1990s as the Treaty obligations on freedom of movement of labour and capital and the right of establishment took precedence over national quota rights.

“As a result, the UK Government (with the approval of the European Commission) introduced an economic link licensing requirement that obliges all vessels which land more than 50 percent of their catch abroad to demonstrate a genuine economic benefit to the UK.

Mr Deas pointed out that “this requirement has recently been reviewed and the requirements made more stringent.”

The issue of foreign interests owning licenses and quotas for UK fisheries was “a matter of concern in some parts of our industry”, Mr Deas said, but “views vary”.

He also cautioned that quota holdings by foreign interest tended to focus on “a limited number of species” such as mackerel, herring and sole, and that England and Wales’s inshore fleets “predominantly” fish for non-quota species.