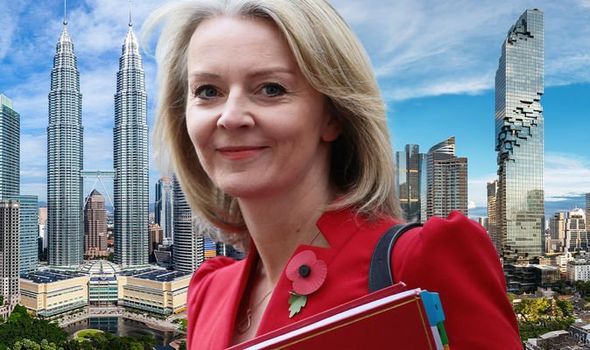 Ms Truss, who is about to embark on a tour of Indonesia, Malaysia and Thailand, said Britain is “now setting its sights on the Indo-Pacific region”. She said she was determined to “zero in on the opportunities of the future”, with stronger ties in the East delivering jobs and opportunity back home. After a difficult week for the Government with Tory sleaze back in the picture at Parliament, the Foreign Secretary has sought to take a grip on the agenda and move it on to shaping Global Britain.

Her trip comes as talks over the Northern Ireland Protocol are set to resume in London, although hopes of an EU compromise are dwindling.

And with the EU still making threats of a trade war over Northern Ireland and fishing rights, the Foreign Secretary has made it clear that Britain’s future prosperity lies beyond Europe.

She believes the jobs of the future in technology, artificial intelligence and other areas can be best found by working together with growing Asian powerhouse economies.

Ms Truss will arrive in Indonesian capital Kuala Lumpur on Sunday night. The countries on her tour are all part of the Association of Southeast Asian Nations (ASEAN).

Sources close to the Foreign Secretary said the fact she was making the trip east so early in her tenure demonstrated the importance she placed on the region.

A source close to Truss said: “This is all about seizing the opportunities of Brexit and looking towards the fastest-growing parts of the world and the huge Asian economies of the future. Liz will be making the case for stronger economic and tech ties with these countries, which will help secure Britain’s place in the world for decades to come.”

Ms Truss points out that by 2050 Indonesia, not Germany, will be the fourth biggest economy in the world.

She also underlined that the freedom allowed by Brexit has enabled the UK to revitalise its relationships with the world’s fastest growing economies.

Ms Truss noted: “For too long, we have allowed our relationship with such nations to be under-powered – but now is the time for it to be turbocharged.

“We are using our newfound freedom to position ourselves alongside the next generation of economic superpowers and tech leaders.”

She went on: “We are zeroing in on the opportunities of the future, such as technology. With the digital revolution only accelerating in the wake of the pandemic, we want to club together with like-minded partners to form a coalition of tech revolutionaries.

“We want to be working closer to push new frontiers of innovation with forward-leaning nations across the world in areas like AI and quantum computing.

“This is about more than capitalising on today’s innovation like 5G, but leading the way in the breakthroughs of tomorrow like 6G and beyond.”

The Foreign Secretary plans to build on her impressive legacy from her last job in Government as the International Trade Secretary and has made no secret that she wants to bring democratic economies around the world together as a bulwark for the growing power of China.

It is understood that she has even privately discussed the idea of a need for an “economic version of Nato”.

When she was International Trade Secretary Ms Truss also laid the groundwork for the UK to start this new economic alliance by beginning the process of joining the Comprehensive and Progressive Agreement for Trans-Pacific Partnership (CPTPP).

Ms Truss said she believed closer ties now would help Britain capitalise on valuable and growing economies as the country moves on from Covid.

She said: “Indonesia, like Thailand and Malaysia, has a booming middle-class craving the best of British, from our world-class food and drink like Welsh lamb to world-renowned cars like Aston Martin and best-selling computer games such as Minecraft.

“With 60 per cent of the world’s high-income earners expected by the end of this decade to be living in Asia, we need to be selling more goods and services into these markets. That is why our work to join Malaysia and ten other vibrant economies in the Trans-Pacific Partnership is vital. “

Ms Truss has also been trying to persuade the US to rejoin CPTPP after Donald Trump cancelled its membership.

The Democrats are understood to be reluctant to rejoin because of the influence of American trade unions in the rust belt states of Ohio and Pennsylvania which are swing states in the US elections.

Sources said she told US President Joe Biden that “the US needs to step up” and join democratic countries in economic partnerships when she visited the White House with Boris Johnson recently.

The Foreign Secretary, who consistently comes out top in popularity polls in the Conservative Party and who is the favourite among MPs as the next Prime Minister, made it clear that UK defence strategy and economic activity must be linked.

She said: “I want the UK to be the beating heart of a global network of liberty, which is why we are advancing our values, such as free enterprise, opportunity and democracy, from a position of strength.

“There is no finer symbol of our determination to do so than an F35 taking off from HMS Queen Elizabeth, as I saw for myself during its stop in Mumbai.

“This Carrier Strike Group has been going from port to port, working and exercising alongside nations like Malaysia, Thailand and Indonesia, in its mission to protect our sea routes, supply chains and fundamental freedoms.”

Marco Longhi, the MP for Dudley North who was one of the Conservative MPs to break the Labour red wall in 2019, said that Ms Truss’ mission “underlines what Brexit is all about.”

Mr Longhi, who is also a trade envoy to Brazil, said: “Liz Truss is great at going out and promoting UK Plc. It’s what we all need to do, whether we are ministers, backbenchers, trade envoys or not.

“We were shackled when we were part of the EU and did not have these opportunities to forge these alliances.

“This is not just about creating more jobs in this country but safer and more secure jobs for the future as well as more wealth for everyone through investment and partnerships.”

North West Leicestershire MP Andrew Bridgen added: “This is one of the main benefits of Brexit that we can start talking about these trade deals with countries which we were unable to have separate agreements with while we were stuck in the EU.

“Leaving the EU has allowed us to have British trade and foreign policies again.”