Undecided voters approached the first presidential debate between President Trump and Joseph R. Biden Jr. with some hope of hearing policies and plans that could help them make a decision they had been mulling for months.

Instead, they listened with a mix of disgust and dismay, appalled by the name-calling and lack of decorum of a debate that seemed to shatter any remaining belief that political norms might prevail in a national moment that is anything but normal.

“They seemed like little kids arguing. Or maybe old guys arguing in a diner somewhere. Maybe that’s where they belong — in some diner arguing, not on the national stage,” said Ellen Christenson, 69, of Stevens Point, Wis. “I am just so disappointed in the evening. I don’t have any more information than when I started watching.”

Ms. Christenson said she leaned Democratic, but was undecided this election. Before the debate, she was considering voting for Mr. Trump.

“It was really kind of useless to the American people. I am just sort of disgusted,” she said. “I don’t feel like voting for either of them really, but especially the president.”

For voters battered by a public health crisis that has upended their lives for months and struggling through an economic recession, the debate seemed disconnected from their daily struggles. With hundreds of thousands of people applying for jobless benefits every week and more than 206,000 killed by the coronavirus, the debate became just one more stressor in a country already feeling on edge.

A majority of Americans say they believe the nation’s politics are deeply dysfunctional, framing the election in starkly existential terms. Most say they think the contest will decide whether the United States will remain a prosperous democracy, a view that cuts across age, gender, race, region and ideology.

Tuesday night’s debate only exacerbated those fears. In the highest-profile moment of the highly charged campaign, the candidates presented insults and interruptions rather than plans to help a fearful and anxious country emerge from a period of national crisis.

Neither man detailed proposals for managing a pandemic still roiling the economy, education and daily life. Mr. Trump left voters with little indication of what he might do if re-elected beyond fiercely attack his opponents. And Mr. Biden, who often struggled to complete a sentence because of interruptions from his rival, didn’t dive into the specifics of his plans beyond promising a greater respect for scientists and public health experts.

“I didn’t hear anything that would impact people like me,” said Merrill Tufts, 51, of Winterville, N.C., who is leaning toward backing Mr. Biden. “I see people who have had their small businesses that have had to close. We’re just making it day by day.”

Mr. Tufts, a retired Marine who describes himself as a Democrat with some conservative views and what he called Christian values, said Mr. Trump’s performance compelled him to condemn the president’s behavior to his teenage sons as the family watched the debate.

“I had to tell them: ‘This is not fine. This is not what I expect from you,’” he said. “It was just out of control from jump street. You can smile, smirk, whatever you want, but you can’t just shout down constantly.”

Tim Beck, 68, said he couldn’t sleep after watching the debate, saying the complete lack of decorum left him shaken and questioning his support of Mr. Trump.

Mr. Beck, a retired insurance industry executive from Grand Junction, Mich., voted Libertarian in 2016 because he thought Mr. Trump “was just too whacked out.”

But the last four years have converted Mr. Beck into a backer of Mr. Trump — until Tuesday night’s debate. Now, he’s taking a second look at the Libertarian candidate, Jo Jorgensen.

“I’ve always been a conservative, but I have never seen such an appalling spectacle,” he said. “I have to try to transcend the personalities, like Trump’s nasty, narcissistic personality, and look at actual policies.” 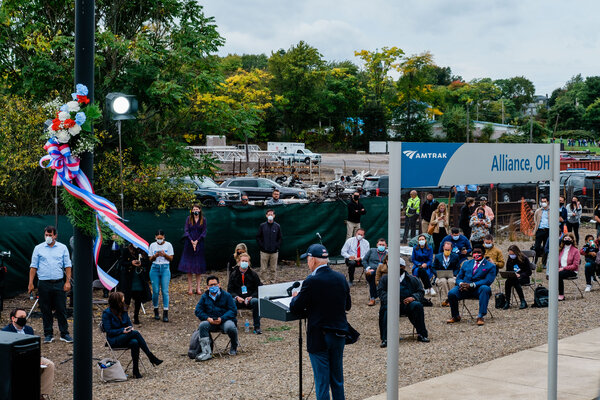 In Alliance, Ohio, where Mr. Biden spoke Wednesday as part of his whistle-stop train tour through the region, supporters of both presidential candidates lined up across from the train station, seeking to drown each other out with their chants. But at least a few of the Ohioans in attendance, from opposite sides of the aisle, were in agreement on the ugliness of the debate the night before.

“Did you watch the thing last night?” demanded Joan Boyce, 82, when asked why she was backing Mr. Biden. “Then you know why.”

Larry Johnson, 73, stood a few feet away, observing the most vocal Trump supporters. He, too, was disillusioned by the tenor of the debate, though he said he would probably support the president.

“Embarrassing for the country,” he said. “They were both rude.”

Still, he shrugged, “Things have been rude forever.”

Amid a deeply polarized electorate and with voting already underway in states across the country, undecided voters comprise only a small slice of the electorate. In a New York Times/Siena College survey released on Sunday, just 10 percent of likely voters didn’t express a vote preference or said they favored a third-party candidate.

Yet, even in the midst of the most extraordinary circumstances, successful presidential campaigns are always a balance of persuasion and mobilization. In swing states such as Arizona, Pennsylvania and Wisconsin, where the contest is likely to come down to a couple of percentage points, there is a small number of critical voters yet to make up their minds.

For Mr. Trump, who has trailed in polls for months, the matchup was his biggest opportunity to win back support in those crucial battleground states. The president has struggled to recapture parts of his 2016 coalition that have drifted away, particularly older voters and white women.

The president struck an aggressive position, aiming to unnerve Mr. Biden and push a politician who has called himself a “gaffe machine" into a misstep.

Instead, Mr. Trump unsettled voters, including some who supported his outsider candidacy four years ago.

“Almost every word that came out his mouth made me cringe,” said Robert Adshead, 62, a criminal defense lawyer and registered Republican from Abington, Pa. “I was shocked at his behavior.”

Mr. Trump interrupted 741 times, according to the online tracker Factbase feed, striking a combative position even with Chris Wallace, the moderator of the event. He attacked Mr. Biden’s son Hunter in deeply personal terms by raising his struggles with drug addiction.

The president’s effort to play offense quickly became offensive, said Mr. Adshead, who voted for Mr. Trump in 2016 but after watching the debate said he had firmly decided to vote for a Democratic presidential candidate for the first time in his life.

Some of the voters who are sticking with the president were also displeased.

“Trump could have taken the high road and not brought up Hunter Biden’s addiction,” said Dyann Harp, 64, a nurse from Waukesha, Wis., who says she is a longtime Republican and supports Mr. Trump.

Mr. Biden, said Ms. Harp, handled the personal attack “as well as any parent could have.”

Democrats voiced little objection to the insults hurled by Mr. Biden. Throughout the evening, Mr. Biden called his opponent a “clown,” “fool,” “liar,” “racist” and the “the worst president America has ever had.”

Joanne Barnes, 66, a retired autoworker from the Detroit suburb of Auburn Hills, said she thought some of the name-calling might have crossed a line, but that was not stopping her from supporting Mr. Biden.

Prominent Republicans expressed unease about President Trump’s failure to disavow an extremist group amid fears that it could damage the party on Election Day.