DENNEHOTSO, Ariz. — Turn off the two-lane highway that runs across the Navajo Nation, just a few miles south of the Utah border, and the pavement yields instantly to the desert.

Drive slowly down an unmarked road, rocking side to side over the sandstone, and you will find the land where Darlene Yazzie’s family has lived for more than a century. It is quiet here, the late-summer sun beating down on a wooden pergola, a cat asleep against a tire in the shade of Ms. Yazzie’s car. When she looks at the news from outside the reservation, she said, she feels lucky to live where she does.

The trade-off is time. “Everything takes time,” Ms. Yazzie said: hauling water to drink, hauling hay for the sheep, getting to the post office 10 miles away.

There are no mailboxes or mail carriers in Dennehotso or any of the other Navajo communities that dot the mesas and scrublands of northeastern Arizona, and an envelope sent from here to anywhere else in the state travels hundreds of miles through Albuquerque and Phoenix first. First-class mail can take 10 days to reach St. Johns, the county seat, about 200 miles away.

In a year in which tens of millions of people plan to vote absentee, in a state that could decide both the presidency and control of the Senate, this geographic isolation has more profound implications than ever before. About 67,000 eligible voters live in the Arizona portion of the Navajo Nation, and President Trump won the state in 2016 by just 91,000 votes.

Like many Americans living under the coronavirus, Ms. Yazzie, 71, a retired public health worker, voted by mail in Arizona’s primary in August after years of voting in person. Unlike many Americans, she had to complete her ballot the moment she received it — in the doorway of the Dennehotso post office, which social-distancing rules forbade her to enter — because taking it home might have meant submitting it too late.

“My son got his ballot late because the post office was closed for a while and we couldn’t get the mail,” she said. “You have to know which hours they’re open, certain days they’re closed, and I didn’t want to do that again. So I just turned around and I filled it in.” 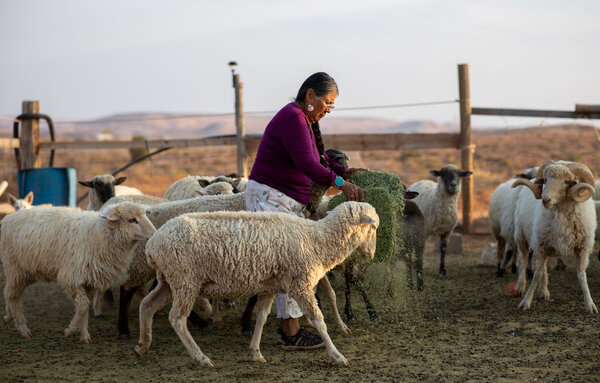 The challenges for voters here resemble the challenges for Native American voters on many reservations, but size multiplies them. At more than 18,000 square miles, the Arizona portion of the Navajo Nation alone is larger than any other reservation in the country. But it has only 27 postal locations, some of them open just three or four hours a day.

This is roughly equivalent to having 13 mailboxes in the entire state of New Jersey.

When Four Directions, a Native American voting rights group, sent test mailings this summer, it found no post office on the reservation from which first-class mail arrived at the appropriate county recorder’s office in less than six days. By comparison, it took less than 18 hours for mail from Scottsdale, an affluent city outside Phoenix, to reach the Maricopa County office.

These numbers are the basis for a lawsuit, in which Ms. Yazzie is the lead plaintiff, that Four Directions filed against the Arizona secretary of state, Katie Hobbs, to extend the deadline for counties to receive ballots from voters on the reservation. It argues that the state’s uniform Nov. 3 deadline violates the Voting Rights Act of 1965 by giving Navajo voters less opportunity to vote than other Arizonans, and calls for ballots received from the reservation by Nov. 13 to be counted as long as they are postmarked by Election Day.

A district court let the existing deadline stand, ruling that the plaintiffs had not proved it affected them more than rural voters outside the reservation. Four Directions appealed, arguing that the plaintiffs needed only to demonstrate that they had “less opportunities to participate in the political process than other Arizona citizens due to their race or color,” not “to establish a difference between the tribal members who are part of a protected class of voters and other non-Indian yet also ‘rural’ voters.”

A spokeswoman for Ms. Hobbs, a Democrat, said after the lawsuit was filed that she would comply if the court ordered an extension, but that she had no authority to change the deadline because it is set by Arizona law. Her office has given counties $1.5 million to increase voting access for “tribal and rural communities,” distributed about 24,000 voter registration forms as inserts in Native American publications, and run radio announcements in the Navajo language.

Both sides acknowledge that the implications are significant. A deadline extension, Mr. Trump’s lawyers said in opposing it, “would unquestionably affect the share of votes that candidates in the state of Arizona receive.”

While the Navajo Nation is not politically homogeneous — its president, Jonathan Nez, is a Democrat, while its vice president, Myron Lizer, endorsed Mr. Trump at the Republican National Convention — it is much bluer than Arizona as a whole. In 2016, when Mr. Trump won by 3.5 percentage points statewide, Hillary Clinton won by double digits on the reservation.

The trouble, once again, is time. Election Day is less than three weeks away, and the Court of Appeals for the Ninth Circuit just heard oral arguments in Yazzie v. Hobbs on Tuesday.

So the Navajo and their supporters in other tribes are doing what Native Americans have long done: organize on the assumption that the U.S. government will not help them.

Navajo leaders have used events to distribute food and supplies, begun during the pandemic, to encourage voter registration as well. On one day in September, more than 500 families received informational materials in the communities of Chilchinbito, Rough Rock and Many Farms, Mr. Nez said.

Separately, a team led by Donna Semans, the grass-roots organizing director at Four Directions and a member of the Rosebud Sioux Tribe, has spent weeks training Navajo Nation residents to register their neighbors.

Volunteers arrived at training sites and, without leaving their cars, received registration forms and a slew of personal protective equipment, including masks, gloves and portable ultraviolet lights. They worked in paid shifts and, within a month, registered about 2,000 voters in Tuba City, Kayenta and Window Rock.

But the biggest challenge is still ahead. Many of these voters, plus thousands more across the reservation, are now requesting mail-in ballots — and while there are several ways Arizonans can submit ballots, none are easily accessible on the reservation.

There is only one postal location per 681 square miles on the reservation, compared with one per 15 square miles in Scottsdale, according to an expert report filed in the Yazzie v. Hobbs lawsuit by Bret Healy, a consultant for Four Directions, and Jean Schroedel, a professor of public policy at Claremont Graduate University.

For Navajo voters, “There isn’t a single ballot delivery system in Arizona that is even close to equal,” Mr. Healy said. “These aren’t geographical accidents — why the postal sites are where they are and that there are so few of them — and it’s not an accident of geography where the county seats are. That fundamental, unequal access is a result of politics.”

In many states, outside groups would be allowed to collect voters’ sealed ballots and deliver them to the county recorders’ offices, but that is illegal in Arizona. (The Court of Appeals for the Ninth Circuit ruled that this ban violated the Voting Rights Act in part because it disproportionately affects Native Americans, who face so many barriers to returning their own ballots. But Republicans appealed the case to the Supreme Court, and it will not be resolved before the election.)

In 2018, Four Directions hired hundreds of Navajo Nation residents to drive voters to and from the polls. It is planning a similar effort this year, as extensive as its budget will allow. But the pandemic makes ride-sharing harder to organize safely, and the fact that so many people are using mail ballots means there will be demand for transportation to more locations: drop boxes and early-voting sites as well as traditional Election Day precincts.

The protracted legal battles, too, have made it hard to set strategies.

“I’ve heard people say it’s not their fault that we’re located where we’re located, and it’s not — but this is where they live, and they have just as much right to vote as anybody else,” Ms. Semans said. “All we’re trying to do is bring equality like we were promised.”