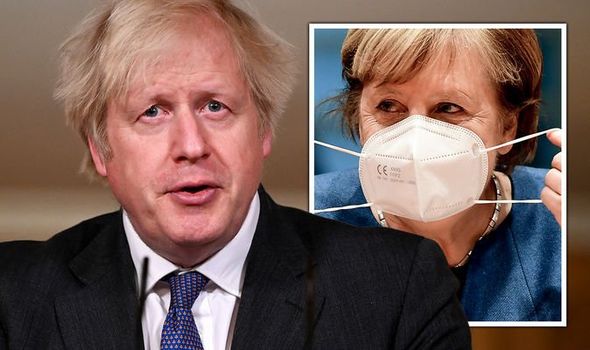 The reports emerged from one of the country’s leading daily newspapers, citing anonymous sources involved with the country’s vaccination programme.

No data was presented to support the claims.

The UK Government has accused the EU country of spreading inaccurate information about the jab, with one official describing the claims as “f***ing bonkers” and the sort of outrageous remarks “you expect it from the Russians” not from Germany.

Another Westminster official said: “The efficacy claims circulating in the German media are unsubstantiated and incorrect.”

A third added: “After this, support for Brexit will be at about 90 percent.”

AstraZeneca has also hit back at the claims in the German media.

A spokesman said: “Reports that the AstraZeneca/Oxford vaccine efficacy is as low as eight percent in adults over 65 are absolutely incorrect.

“In the UK the Joint Committee on Vaccination and Immunisation (JVCI) supported use in the population and the Medicines and Healthcare products Regulatory Agency (MHRA) included this group without dose adjustment in the authorisation for emergency supply.

“In November we published details in The Lancet demonstrating that older showed immune responses to the vaccine, with 100 percent of older adults generating spike-specific antibodies after the second dose.”