WASHINGTON — A British former spy recruited by Erik Prince, the security contractor close to the Trump administration, played a central role in a secretive effort to hire dozens of operatives for the conservative group Project Veritas, deposition testimony shows.

Job applicants traveled to Wyoming in 2017 for interviews with the former intelligence officer, Richard Seddon, as Project Veritas sought to expand its operations early in the Trump administration, according to a lawsuit deposition reviewed by The New York Times. The interviews conducted by Mr. Seddon and his colleagues took place near the airport in the small town of Cody, not far from Mr. Prince’s family ranch.

The new details about Project Veritas show the extent of the group’s ambitions to build an intelligence-gathering apparatus to infiltrate Democratic congressional campaigns, labor organizations, news media and other groups. Project Veritas is known for its sting operations aimed at such groups, which have prompted allegations that it has published deceptively edited videos.

Mr. Seddon did not immediately return an email seeking comment. James O’Keefe, the founder of Project Veritas, did not respond to specific questions about Mr. Seddon or his role with the group. But he wrote in an email, “The NYT has engaged in a coordinated malice-fueled disinformation campaign against Project Veritas.”

The Times reported in March that Mr. Prince, the founder of Blackwater Worldwide and the brother of Education Secretary Betsy DeVos, has in recent years helped recruit American and British former spies for Project Veritas’s intelligence-gathering operations.

Beginning in 2016, Mr. Prince contacted several former intelligence officials — including Mr. Seddon — and pitched them on teaching Project Veritas employees how to operate like spies. In some cases, Mr. Seddon led the recruiting, directly contacting the former officials on Mr. Prince’s behalf.

Project Veritas claims that its employees are journalists who conduct stings in the long tradition of undercover, muckraking journalism. But court documents show how the group has turned to former soldiers and spies for their operations.

The deposition of Samuel Chamberlain, a former U.S. Army officer contracted by Mr. Seddon to do work for Project Veritas, disclosed Mr. Seddon’s role in the hiring process. Mr. Chamberlain, who also helped screen potential employees and manage field operations, was deposed in July as part of a lawsuit filed by a Michigan teachers’ union against Project Veritas.

The union, AFT Michigan, sued Project Veritas in federal court last year, alleging trespassing, eavesdropping and other offenses. The group accused Project Veritas of using an undercover operative in 2017 to gather information that could be made public to damage the organization. Mr. O’Keefe has said the union’s legal claims are “laughable and really nothing more than a heavy-handed attack on Project Veritas and our methods.”

The lawsuit has not deterred Project Veritas. Most recently, the conservative group made public a video that claimed Representative Ilhan Omar’s campaign had links to an illegal ballot-collection scheme in Minnesota. A spokesman for Ms. Omar described the video as “a coordinated right-wing effort to delegitimize a free and fair election.”

Mr. Chamberlain’s deposition provides a rare glimpse into the group’s operations. He said that Mr. Seddon’s company, Branch 6 Consulting International, hired him in 2017 as part of a Project Veritas expansion that almost tripled the number of the group’s undercover operatives. It is not clear who was paying Mr. Seddon. The name of his company appears to be a reference to the British Secret Intelligence Service known as MI6. 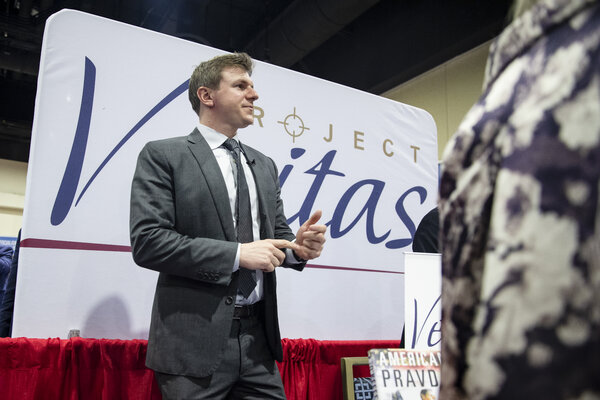 “It was his project, his contract, so ultimately he was in charge of it, but there was such a large volume of people that had applied for positions, I was just helping filter and sift through everything,” Mr. Chamberlain said of Mr. Seddon.

A former combat engineer who served in Iraq, Mr. Chamberlain said his background in the military was useful in managing what Project Veritas operatives were collecting, according to his deposition.

Mr. Chamberlain said he operated as a “middleman between the journalists and the higher echelon of people at Project Veritas,” including Mr. O’Keefe and Joe Halderman. A former television producer, Mr. Halderman was convicted in 2010 of trying to extort $2 million from the comedian David Letterman.

Mr. Chamberlain said he worked with another field manager named Gaz Thomas, a former British commando, who was also recruited by Mr. Seddon.

When The Times contacted Mr. Chamberlain this year, he called Mr. Seddon to give him a “heads-up” that a reporter had reached out, according to the deposition.

Mr. Chamberlain did not respond to an email seeking comment.

He was directly involved in the operation targeting AFT Michigan that relied on an undercover operative named Marisa Jorge who used a code name: LibertyU. Ms. Jorge graduated from Liberty University, a Christian college in Virginia. Mr. Chamberlain said he supervised about two dozen Project Veritas employees, including Ms. Jorge.

During his deposition, Mr. Chamberlain was asked, “You knew that she was going to lie to the folks at AFT Michigan, didn’t you?”

In the deposition, he said he was proud to have worked for Project Veritas.

Mr. Chamberlain said potential applicants were interviewed on the phone and then brought to Wyoming for a second interview at a building near the Cody airport.

The jobs were open to anybody, Mr. Chamberlain said. He had a list of about 100 questions he could ask, and he did not recall whether any were “designed to disclose political predilections.” It was one of the dozens of times during the deposition that Mr. Chamberlain said he could not remember details.

He said he also traveled to Wyoming for training in spring 2017 for about 20 Project Veritas employees. Mr. O’Keefe, Mr. Halderman and Mr. Seddon also attended. The training took place at Mr. Prince’s family ranch, according to interviews.

In a separate deposition taken as part of the AFT Michigan lawsuit, Mr. O’Keefe said he first encountered Mr. Prince — whom he described as a “supporter” — at a 2016 presidential debate between Donald J. Trump and Hillary Clinton. He said he attended training in Wyoming around Cody but did not know who owned the property.

Mr. O’Keefe also said he had not spoken to Mr. Seddon since he left Project Veritas.

Mr. Seddon was a longtime British intelligence officer who served in numerous locations around the world, including Washington, in the years after the Sept. 11 attacks. He is married to an American diplomat, Alice Seddon, who has served in Nigeria and other outposts.

He is currently employed by the National Park Service, according to the agency.