Ursula von der Leyen is the President of the European Commission and has come under fire in recent days over her threats surrounding the exports of the AstraZeneca coronavirus vaccine. In a divisive interview published on Saturday, Ms von der Leyen issued a warning to AstraZeneca, urging them to send vaccines to Europe before other countries – reiterating the “possibility” the EU has of banning exports.

She told Germany’s Funke Media Group: “We have the option of banning a planned export.

“This is a message to AstraZeneca: You fulfil your part of the deal toward Europe before you start to deliver to other countries.”

This came after Ms von der Leyen had already said the Bloc was ready to use procedures to ban exports of vaccines from Europe to those countries which were manufacturing their own vaccines but not exporting them.

The EU Commission president said this was primarily the UK, given the US was not importing vaccines. 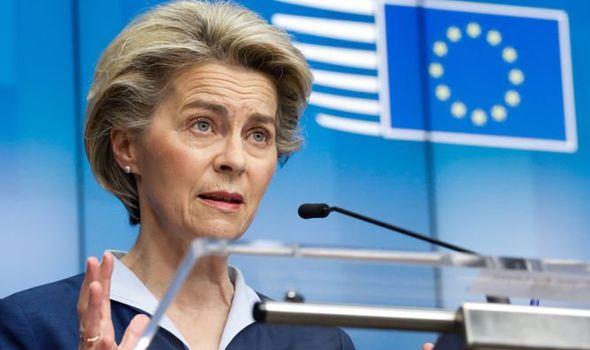 EU Commissioner Mairead McGuinness has also refused to rule out a ban, and said: “Everything is on the table”.

Now Prime Minister Boris Johnson faces a week of negotiations and urgent calls to convince the Bloc not to activate protocols and ban AstraZeneca imports to the UK.

Mr Johnson is expected to speak the EU’s national leaders before their virtual summit.

Ms von der Leyen has been European Commission President since December 2019, and has seen several key changes in her tenure – including Brexit. 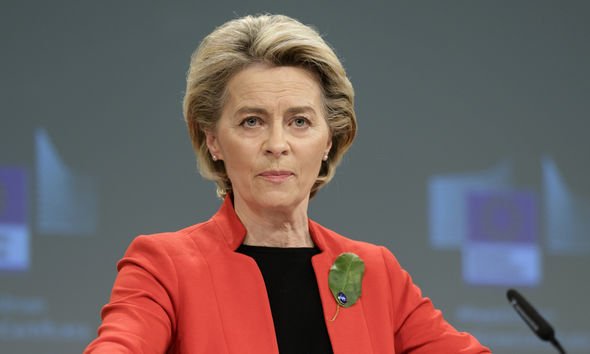 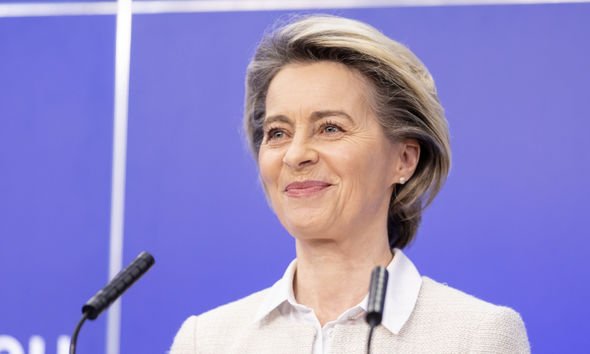 How much does the EU Commission president earn?

Ms Von der Leyen, a 62-year-old mum of seven, is the first female European Commissioner and will receive a handsome salary as EU chief.

While she was German defence minister Ms Von Der Leyen earned €16,254 (£14,205.10) gross a month but this increased substantially with her role as EU president.

The German government (Bundestag) decide their salaries together in Parliament however, the same rules do not apply to the European Commission. 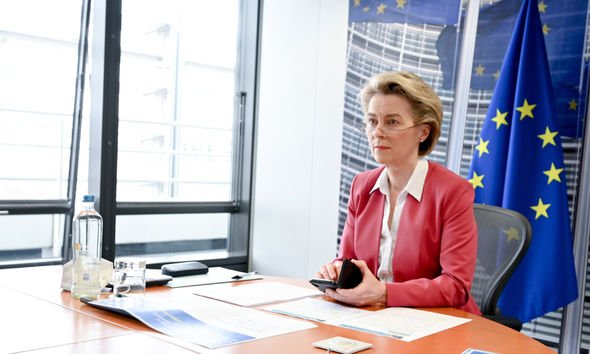 The salaries of the EU Commission are paid from the EU budget.

The commissioners have to pay taxes on their income according to the laws of their respective home countries. These taxes then flow back into the EU budget.

As well as receiving a handsome salary as a serving commissioner, ex EU chiefs also enjoy a huge remuneration after they leave the post.

Ex EU bosses receive “transition payments” for up to three years after leaving the Commission.

Depending on how long they served, former commissioners can still receive payments of up to 65 percent of their former salaries.

The European Commission has previously defended the practice of remuneration payments.

European Commission spokesman Michael Mann told a news briefing: “The aim of this system is to ease their return to the labour market, to maintain their independence after their time as commissioner.”