Brexit: EU planning for a 'transition in all but name' says Phillips

In a memo to political groups, Deputy Secretary-General Markus announced that plans to hold an emergency session to rubber-stamp the UK-EU trade and security deal have been shelved. “There will not be an extraordinary plenary session next week,” he wrote. MEPs had been due to hold a special session between December 27-28 to debate and eventually vote to ratify the Brexit trade agreement.

But senior MEPs decided that they would not be willing to scrutinise the legal text unless a deal was reached by last weekend.

Having missed the deadline, EU Parliament officials are now drawing up plans to give consent to the agreement in the New Year.

UK and EU negotiators are now wrangling with a fresh deadline looming over there work, with Michel Barnier warning of a “short period of no deal” unless talks are wrapped up by tomorrow.

The EU Brexit chief said the deal would have to come before Christmas Day to give eurocrats time to set up its provisional application. 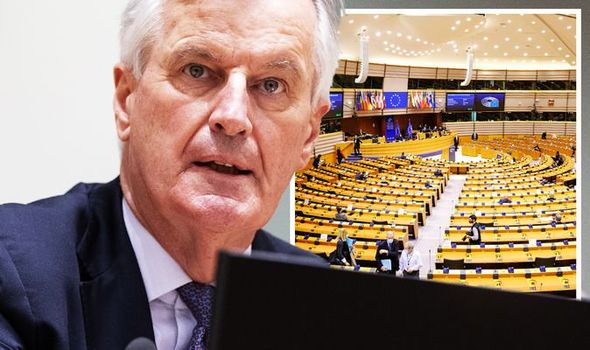 In a meeting with MEPs yesterday, Mr Barnier said the European Council cannot “speed up” its on internal processes to ensure the agreement is in place for January 1.

“I understand from Council is that such a procedure would be impossible after Christmas,” the Frenchman said, according to a source familiar with the discussion.

He added: “What happens if we have an agreement, not this week but next week – and we can no longer get it ratified?

“There’s no more time, we can no longer go through the provisional application… well what will we do then? We have to manage this short no deal period for a few weeks as well as we can.”

Officials are hopeful an agreement between the EU and UK could emerge by the end of the day.

Mr Barnier has all but conceded he had made his “final offer” to Britain on post-Brexit fishing rights and the haggling was now in the hands of EU Commission chief Ursula von der Leyen.

The top eurocrat has been in “constant contact” with Prime Minister Boris Johnson as they attempt to hammer out a last-minute compromise on the totemic issue.

Mr Barnier suggested the EU’s view was the UK is “not moving enough yet to clinch a fair deal on fisheries”.

MUST READ: Keir Starmer terrified of being unmasked as ‘secret Remainer’

And the Brussels diplomat last night all but conceded he has taken the talks on fish as far as he can.

He kicked the issue upstairs to Mr Johnson and Mrs von der Leyen to find a political compromise in the coming days.

Mr Barnier told MEPs: “It’s at this level this issue needs to be dealt with – the President and UK Prime Minister – in order to try and find a compromise.”

It is understood Mrs von der Leyen is so keen to wrap up a deal that she is now heavily lobbying EU coastal states to accept a compromise on fishing.

The Brussels boss was said to have kept Michel Barnier in the dark over the phone call with Mr Johnson amid concerns her chief negotiator is not willing to offer more ground to Britain.

Mrs von der Leyen is likely to speak with key figures, such as France’s President Macron and Germany’s Angela Merkel, as the talks continue.

It followed reports the PM proposed that EU boats should hand back 30-35 per cent by value of their current catches in Britain’s coastal waters, to be phased in over five years.

That is down from an initial demand for a 60 per cent cut over three years, but the compromise was reportedly rejected by Brussels.