The French President laid into his Austrian counterpart during the fraught talks over the bloc’s future, which have now entered into their fourth day. Mr Macron has led a vicious assault on the so-called “Frugal Four”, of whom Austria is a member, after the group of fiscally conservatives nations shot down the French leader’s hopes for a €750 billion war chest to send aid to pandemic-stricken economies. During the diplomatic stand-off in Brussels, Mr Kurz told reporters: “If someone thinks they can dictate here and say ‘this is it’, or that they go home, the summit may fail, but I hope that’s not the way it is.”

His outburst came after Mr Macron suggested he had ordered aides to ready France’s private jet to take him back to Paris.

The French President exacted revenge on Mr Kurz late on Sunday night as the marathon talks showed no signs of an agreement.

As the Austrian left the room to take a phone call, Mr Macron fumed: “You see? He doesn’t care.

“He doesn’t listen to others, has a bad attitude. He handles his press and basta.” 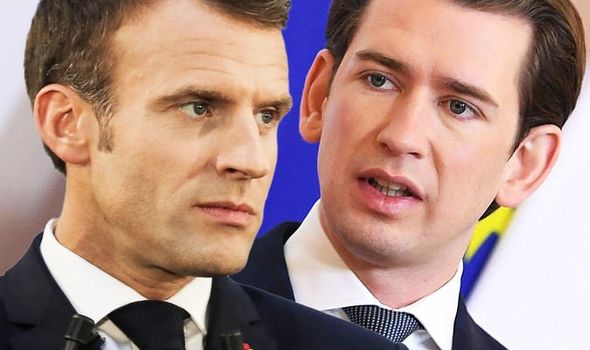 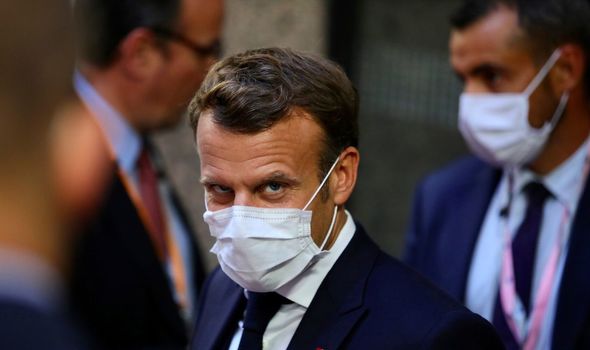 Mr Macron wants to defend his original plan that contained €500 billion in grants for the worst-hit countries from the coronavirus crisis.

The Netherlands, Austria, Denmark and Sweden fought hard to reduce the size of the package to €350 billion in grants with another €350 billion in loans in a total deal with €700 billion.

With the support of Finland, the nations also said their offer was conditional on rebates to their EU budget contributions.

The frugal leaders’ offer represented a significant change from their pre-summit position that no grants should be distributed under the fund.

Mr Macron compared their stance to David Cameron’s refusal to hand over vast sums of cash to Brussels at previous budget summits. 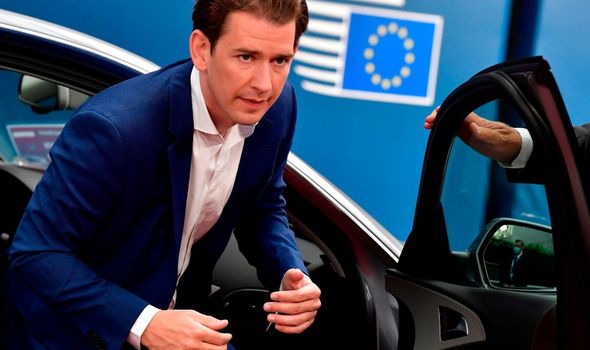 France, Germany and Spain insisted grants should be ring fenced at no less than €400 billion.

In a bid to broker a compromise deal, European Council President Charles Michel this morning floated a new figure for €390 billion to be handed out to the worst-hit countries.

He eventually called talks off and ordered leaders to reconvene later this afternoon.

Diplomats praised the new figures and said the fresh offer could herald a breakthrough in the marathon talks. 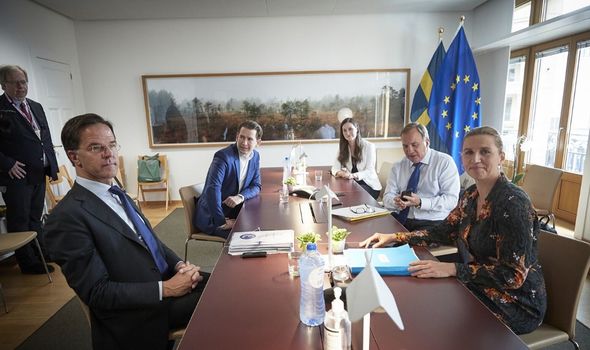 Leaving the summit,  Mr Kurz, who supports a smaller fund, said he was “very happy” after “tough negotiations”.

If a deal is struck on the size of the package, EU leaders’ focus will shift to the thorny issue of how to govern the distribution of recovery funds.

Capitals will also need to decide whether to tie in cash handouts to respect the rule of law, much to the disgust of Hungary and Poland.

Hungarian prime minister Viktor Orban threatened to veto the entire package if funding is linked to respect for the rule of law.

Budapest insisted potential sanctions to suspend any payments would need the unanimous support of all governments, handing him an effective veto.

Leaders have been negotiating since Friday morning as they seek to secure an agreement on how to co-ordinate the bloc’s response to Europe’s deepest recession since the end of the Second World War.

The package will allow the European Commission to borrow unprecedented amounts on international markets in order to fund the recovery.

Governments are also discussing the EU’s next seven-year budget, with the current proposals sitting at over €1 trillion.

Failure to reach an agreement has sown panic amongst some leaders.

Italian prime minister Giuseppe Conte said failure to broker a compromise would lead to the “destruction of Europe’s single market”, according to diplomats.

With no end in sight, the European leaders summit in Brussels has already overtaken the bloc’s longest effort in Nice, France, twenty years ago.