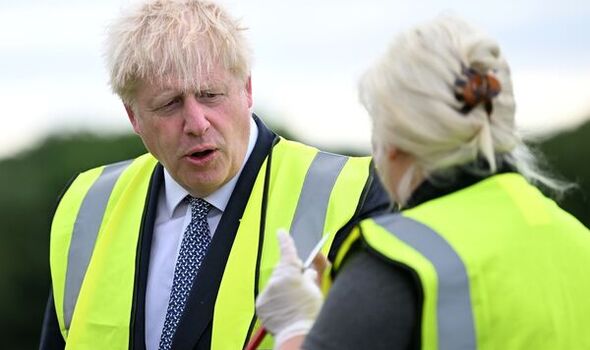 The Prime Minister said eating less was the best way to shed pounds.

His comments yesterday, as he visited a farm in Cornwall, came after his lead adviser said the Government’s plan does not address the nation’s health problems.

Leon restaurant co-founder Henry Dimbleby argued for a sugar and salt tax – but it was left out of the National Food Strategy.

The PM, who lost a stone cutting back on cheese, chocolate and booze, said: “What we don’t want to do right now is start whacking new taxes [on people] that will just push up the cost of food. The best way to lose weight, believe me, is to eat less.”

Mr Johnson said: “Frankly, we’ve got an opportunity now to eat much more domestic produce and to improve our food security and that’s what we’re trying to do.”

Mr Dimbleby said there had been some progress, but the plan was not the “big, bold, unified strategy” the country needed.

A priority is to reduce the distance between farm and fork, with a vision for 50 percent of public sector food spending to go on local or higher-standard produce.

There are also plans for a new professional body for the farming and growing industry.

TV host Jeremy Clarkson, 62, said the Government must prioritise farming in the next Parliament.

He has campaigned for the industry since buying Cotswolds farm Diddly Squat in 2008 and starring in Amazon series Clarkson’s Farm.

He said red tape was stopping farmers from diversifying and has claimed he was blocked from selling crayfish at his farm shop.

Mr Johnson responded yesterday: “We are putting a lot of money into new technology. I have just been looking at a machine that can plant 150,000 cabbages, Jeremy, every day.”

Yesterday, ex-Tory Health Minister Steve Brine said the Government had a responsibility not to kick a salt and sugar tax “into the long grass”.

He said the UK was storing up future obesity, Type 2 diabetes and strokes.