Conservative MP Chris Clarkson asked Angela Rayner if she had referred to him as scum while heckling him in the House of Commons. The Deputy Speaker was forced to interrupt the verbal altercation. Ms Rayner stated she did not say that to Mr Clarkson.

The Conservative MP said: “I know she speaks for a lot of her front bench colleagues when she says that, we just need to see it in the support U-turn opposed approach that has characterised that hindsight heavy behaviour.

“Excuse me did the Honourable Lady just call me scum?”

Ms Rayner said to the Deputy Speaker regarding Mr Clarkson’s comments: “I think one of the things I would ask your guidance on is on members sayings things about the front bench which are inaccurate in their speech and I would ask them to withdraw it.” 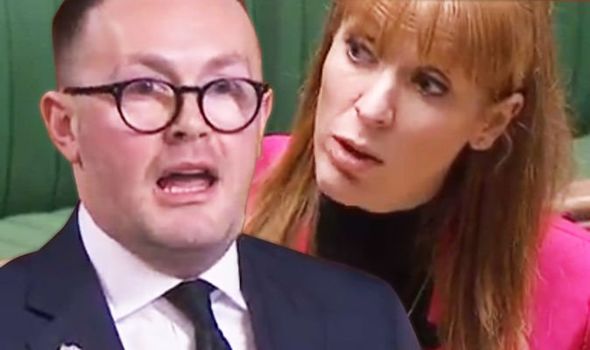 The Conservative MP added: “I should clarify I asked the Honourable Lady if she called me that, that is what I heard.”

The Labour MP suffered a backlash on social media following the clash.

Conservative MP Dehenna Davison tweeted in response to footage of the clash: “So @AngelaRayner literally just called @ChrisClarksonMP “scum” in the Chamber whilst he was making his speech about COVID support.

“Absolutely disgraceful behaviour from the Labour front bench. Rayner needs to apologise immediately. This is not what politics is about.”

Another Tory MP, Amanda Milling wrote regarding the viral clip of the encounter: “This is totally unacceptable from @AngelaRayner. At 29 seconds you can clearly hear her call @ChrisClarksonMP “scum.”

“As elected representatives we have a duty to lead by example. Will she apologise and if not will Keir Starmer take action?”

“@AngelaRayner is the Deputy Leader of the Labour Party. She should be ashamed and @Keir_Starmer should make her apologise.

“We’ve become numb to abusive language in politics on social media, let’s not take it into the chamber of the House of Commons.”