DETROIT — On most Sundays, the Rev. Steve Bland Jr. is in the pulpit of his Liberty Temple Baptist Church in Detroit, preaching to his congregation as a choir gives praise.

And in the weeks before an election, whether it’s for the midterms or for the city, he is usually joined on the altar almost every Sunday by a candidate, usually a Democrat, there to say a few words in the hopes of gaining a foothold among Black voters who can make or break a political campaign.

But this fall, as Detroit deals with the devastating impact of a coronavirus pandemic that has infected more than 15,000 city residents and killed more than 1,600, Sunday services, campaigning and even voting itself have been turned upside down. There is not only the added burden of navigating absentee ballots and potential mail delays but also targeted disinformation campaigns aiming to dissuade voters from voting by mail.

For Democrats, this altered reality is coinciding with a sense of urgency about reversing the debacle of 2016, when 41,625 fewer Detroit voters cast ballots than in 2012, helping Donald J. Trump win in Michigan by a razor-thin margin of 10,704 votes.

It’s not that Detroiters didn’t support Hillary Clinton, who got 94 percent of the votes from city residents. But when turnout is depressed, all bets are off.

For Mr. Bland and other pastors, the focus now is on getting out the vote in Detroit, where Black residents make up nearly 79 percent of the population. To do that in a pandemic, he has invited candidates to speak during worship services streamed on Zoom, and he has set up polling places at the church and provided information on candidates who share the church’s values.

In the case of the Council of Baptist Pastors, which represents 180 churches with more than 100,000 members and of which Mr. Bland is president, that means support for Joseph R. Biden Jr., the Democratic nominee.

“It’s important for us to lead, especially in this pandemic, when people are operating in fear,” Mr. Bland added. “But the message the church brings is, ‘Fear not.’ We just don’t want people to be afraid to exercise their right to vote.”

The coronavirus is only one of the threats to voting. Michigan’s attorney general, Dana Nessel, filed election fraud charges Thursday against Jacob Wohl and Jack Burkman, right-wing operatives who have been accused of sending a robocall to 85,000 voters in a number of cities, including Detroit, falsely saying that voting by mail would provide information that could be used by the authorities to track down old arrest warrants and by credit card companies to collect outstanding debts.

“We can’t allow people to interfere with the vote,” Ms. Nessel said. “This is just widespread voter suppression.”

Yet amid these challenges, the city has seen a rise in many other efforts, big and small, partisan and nonpartisan, to ensure a big turnout from the city’s Black voters.

Ray-Jon Williams-Jackson, 21, a football player at Wayne State University, and some of his friends plan to drive voters either to the polls on Election Day or to the city’s election headquarters to drop off their absentee ballots.

“I go to vote just because my great-great-grandparents weren’t able to vote,” said Mr. Williams-Jackson, who supports Mr. Biden.

Maurice Walker, 47, a catering company owner who offers free barbecues across the city, is adding a voter registration table and absentee ballot education to his cookouts.

“This is the first time I’ve gotten engaged in an election,” Mr. Walker said. “But it’s an election year, period. And it’s voting time. I don’t care who you vote for, as long as you vote.” 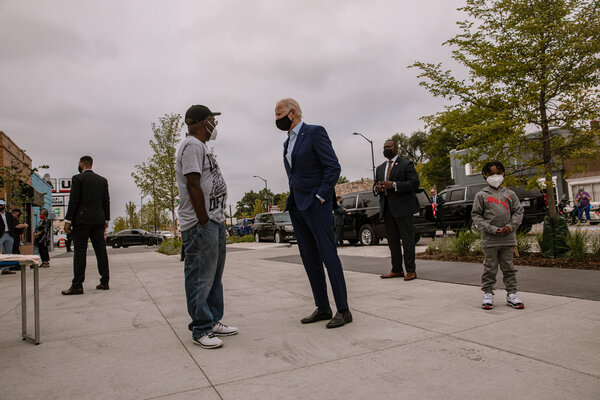 In prior election years, Kathryn Littleton, a human resources director from Troy, a suburb of Detroit, would go to public schools to help people register to vote and to senior homes, jazz concerts, art fairs and churches to urge Black voters to cast their ballots. While the pandemic has curtailed in-person activities, the efforts in 2020 are no less intense.

Delta Sigma Theta, of which Ms. Littleton is a member, and others in the “Divine 9” Black fraternities and sororities are targeting friends, relatives and voters from low-turnout groups with calls, virtual town halls and educational forums, urging them to vote early.

“Face-to-face is very hard these days, but all boots are on the ground, virtually,” Ms. Littleton said.

Before Michigan’s August primary, a coalition of progressive groups targeted infrequent voters, sending around 1.6 million text messages. This year, hundreds of the coalition’s members are concentrating on reminding friends and family with texts and calls to vote.

“People are going to be completely saturated by text messages and phone calls, and they’re going to stop picking up the phone, but you can’t avoid your cousin or your mom or your fellow church member,” said Grecia Lima, an organizer for Community Change Action.

The state Democratic Party and Mr. Biden have taken a particular interest in the city. His campaign has delivered more than two million texts or calls to city voters and is advertising heavily there. Statewide, it has budgeted nearly $60 million for ads, with $32.5 million of that for Detroit, compared with a total of roughly $31 million by the Trump campaign, which has reserved $9.7 million of that for the city, according to data from Advertising Analytics.

“From my bird’s nest, I’m looking at Democrats with all hands on deck — the community-based organizations, the faith-based groups, they’re all doing a lot of different type of campaigning,” said Mario Morrow, a political consultant based in Detroit who has worked for both Democrats and Republicans. “And Biden has exceeded all expectations with his media buys.”

In addition, both Mr. Biden and his vice-presidential pick, Senator Kamala Harris, have been to Detroit this campaign season, with visits last month to small businesses in the city’s neighborhoods. That meant something to voters like Warner Webster, 85, a retired autoworker who stood on Seven Mile Road, waiting to catch a glimpse of Ms. Harris as she left a barbershop in the city’s northwest.

“I’ve never seen a candidate here,” he said. “From what I understand, she’s going to be pretty good. She’s going to get my vote.”

Mayor Mike Duggan also said he appreciated the attention the Biden campaign had paid to Detroit, saying that Mr. Biden had called the night before visiting. “I thought to myself, not once during the 2016 campaign did I ever get a call from Hillary Clinton, asking: ‘What should I be doing? Where should I be going?’” he said.

Mr. Biden was scheduled to make another trip on Friday to Michigan, where he will stop in Grand Rapids to visit a voter mobilization center and discuss how to rebuild the economy.

On the flip side, Mr. Trump — the first Republican since 1988 to carry the state in a presidential race — has returned to Michigan eight times since 2017. But he hasn’t been to Detroit since Sept. 3, 2016, when he visited the Great Faith Ministries International Church for a forum with Bishop Wayne Jackson, who also offered a benediction at Mr. Trump’s inauguration in 2017.

Bishop Jackson wouldn’t say who he was supporting for president this year, but he’s hosting a series of four get-out-the-vote shows on the Impact Network, an urban television network he founded that reaches nearly 90 million homes.

“There are a lot of things that are important for African-Americans: social injustice, police brutality and things that need to happen with policing,” he said, also noting how the coronavirus crisis had hit African-American communities particularly hard. “So it’s important to exercise the vote that we inherited from the pain and suffering of our forefathers.”

But he also offered a warning to both political parties this year: Democrats shouldn’t take Black votes for granted, and Republicans shouldn’t make promises they won’t keep.

“There’s more to be done on both sides,” Bishop Jackson said.

Paris Dennard, the senior communications adviser for Black media affairs at the Republican National Committee, said that the Trump campaign had not ignored Detroit or the Black community. He pointed to an office that the party and the campaign maintain in the city and to the round table with Black leaders Mr. Trump held at an auto plant in Ypsilanti, Mich., in May.

Wayne Bradley, a Republican political consultant who also has a radio program in Detroit, said that he expected Black women to stick with Democrats but that some Black men were moving toward Mr. Trump. He expects Mr. Biden to get the vast majority of votes in the city, but if Republicans can shift a few percentage points away from Democrats, it could provide a winning margin for Mr. Trump. In 2016, 96 percent of Black women in Michigan voted for Hillary Clinton, whereas 88 percent of Black men did, according to CNN exit polls.

“They’re not going to be showing up at rallies or wearing T-shirts and hats, but they’re going to vote for him quietly,” Mr. Bradley said.

For Democrats, there is evidence that the effort to increase voter turnout in the city is working. In the August primary elections, turnout nearly doubled — from 65,115 total votes in 2016 to 121,298 this year. And 114,191 Detroit voters have already requested absentee ballots for the general election.

Mr. Duggan has also noted a shift in Detroit. “I don’t think we’re going to have a problem assuring a big turnout,” he said.

Edith Ware, 73, was among the hundreds of Detroiters dropping off their absentee ballots on the day early voting started in Michigan last week, worried that her vote for Mr. Biden might not be counted if she relied on the mail. As a retired postal worker, her fears are buttressed by recent actions taken by the U.S. Postal Service, such as suspending overtime pay for mail carriers and removing mail-sorting machines.

“I’m worried about the mail being late,” she said. “To see them taking those machines out of the post office, I know how those machines process the mail, and they’re just making it hard for those workers.”

President Trump said early Friday that he and the first lady had tested positive for the coronavirus, after he had spent months playing down the severity of the outbreak.