For Joseph R. Biden Jr. and the Democratic Party that he now leads, the expected selection of Judge Amy Coney Barrett by President Trump on Saturday puts a name and a face to the urgent threat they believe a 6-3 conservative majority on the Supreme Court poses to decades of progressive laws and protections.

Not that Mr. Biden and the Democrats want to focus on Judge Barrett herself.

Instead, Democrats pressing to slow or stop the advancement of Mr. Trump’s pick are determined to frame the debate around the real-world consequences — especially on health care but also abortion — of what would be the biggest ideological swing on the high court in a generation, a rightward lurch not seen since Justice Clarence Thomas replaced the late Justice Thurgood Marshall.

For Mr. Trump, the choice of Judge Barrett represents a welcome chance to shake up the race in which he has been trailing in the polls, and potentially address a staggering gender gap by shoring up his standing with more conservative women who are alienated by his personal style and other elements of his record.

It also provides him with something of a leading woman as part of his 2020 ticket, and a ferocious confirmation battle that could shift some national attention away from a pandemic that has cost the lives of more than 200,000 Americans and toward the kind of culture war turf that Mr. Trump is most comfortable occupying. 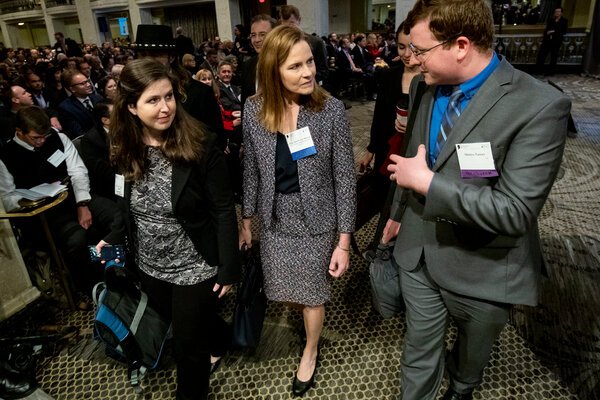 A majority of Americans believe the winner of the November election should make the pick, according to recent polling. But in nominating Judge Barrett to replace Justice Ruth Bader Ginsburg, Mr. Trump has pushed to the forefront a complex new stew of factors as Republicans play up her personal story as an accomplished 48-year-old working mother of faith. It’s a development that could sway or mobilize key voting blocs on both sides of the aisle: Evangelical and conservative Catholic voters, abortion-rights activists and opponents, women and young people.

All of those political crosscurrents will be on display on Tuesday, as Mr. Trump and Mr. Biden head into the first debate of the general election. A sizable share of the waning days of the campaign will be consumed by the court fight: just the committee hearings and a final confirmation vote alone would account for more than 10 percent of the remaining calendar.

“It’s a little bit of a tricky balance Democrats are going to have to think through,” said Dan Sena, a Democratic strategist who oversaw the party’s takeover of the House of Representatives in 2018.

“Your base is going to want you to stand up and fight for a seat basically viewed as a Democratic-leaning seat,” Mr. Sena added. But depending on how the battle unfolds, he warned, it may “put people in hyperpartisan corners,” which could endanger Democratic gains with swing voters.

Mr. Biden’s team sees the issue of the courts chiefly as a chance to mobilize the Democratic base, even as they continue to cast the race as a referendum on Mr. Trump and his stewardship of the pandemic above all. In his lone public appearance on Saturday, a speech to a national conference of mayors, Mr. Biden did not even mention the court, or Judge Barrett.

While the Biden campaign also sees opportunities to engage some swing voters by framing the courts vacancy around issues including health care and maintaining the right to an abortion, the issue, for now, appears unlikely to leapfrog the economy and the pandemic as central message in his case for defeating Mr. Trump.

If the Republicans hope to personalize the court fight around Judge Barrett, a Catholic with seven children — all teens and younger — including two adopted from Haiti and a son with Down syndrome, Biden campaign officials are wary of any lines of criticism on her deeply conservative background that could be perceived as personal attacks.

Democrats instead signaled their strongest political strategy was to focus on the issues at risk with a 6-3 conservative court.

“She’s a woman, but the most important fact is that she’s for getting rid of Roe v. Wade and the Affordable Care Act and has positions that will hurt millions of women,” said Josh Schwerin, a spokesman for Priorities USA, a leading pro-Biden super PAC. “If Republicans think that just by putting up a woman they are checking a box that will help them win back suburban women, they’re wrong.”

Whomever Mr. Trump nominated, Democrats had planned to portray her as a threat to the Affordable Care Act. But Judge Barrett provides particular ammunition after she criticized Chief Justice John G. Roberts Jr.’s opinion preserving the law as having gone “beyond its plausible meaning to save the statute.”

“We’re getting a nominee who is fundamentally at odds with the public on two very core issues,” said former Mayor Rahm Emanuel of Chicago, describing health care coverage for people with pre-existing conditions and protecting Roe v. Wade as powerful Democratic arguments. “That’s where the line of inquiry should be.”

Senator Kamala Harris, Mr. Biden’s running mate, sits on the Judiciary Committee, providing the Biden campaign an unusually direct role in the unfolding process. A former prosecutor, Ms. Harris has displayed an exacting style of questioning that helped make her a star and was part of her appeal in joining the ticket in the first place.

State Senator Annette Taddeo, a Florida Democrat said Saturday that the appointment was an opportunity to further engage younger voters.

“Because of the coronavirus, because of the economy, and now, add to all of those things, add the judge,” she said, adding, “They’re woke.”

The appointment comes as Republicans are already seeking to cut into the traditional Democratic advantage with Hispanic voters, providing fresh relevancy for appeals to more conservative Hispanic Catholic and evangelical voters on matters of religious liberty.

And Penny Nance, the head of the socially conservative group Concerned Women for America, said she expected the choice would help Mr. Trump shore up his standing with Catholic women in critical battleground states, in particular in the Industrial Midwest. Catholic voters are a diverse constituency, but while Mr. Trump won white Catholics in 2016, he is showing some signs of weakness with those voters this year.

“In states like Pennsylvania, Wisconsin, Ohio, you have a strong Catholic base there and this nominee is right on target,’’ said Ms. Nance, who expected to be at the White House later Saturday.

Even before Judge Barrett was named Republicans began accusing Democrats of “bigoted attacks on her Christian faith,” as former White House press secretary Sarah Huckabee Sanders, put it on Twitter, praising the judge as “a working mom with impeccable legal credentials.”

Democrats said they hoped not to fall into that trap.

“Groups like mine are not planning to go near that issue at all,” said Brian Fallon, the executive director of Demand Justice, which is spending millions on television ads in key states highlighting the consequences of a new justice.

The first ad flight, Mr. Fallon said, will ask why Republicans are rushing through this pick while not addressing the economic fallout of the pandemic.

A clear majority of Americans, 57 percent, said the next justice should be selected by the winner of the November election, compared to only 38 percent who said Mr. Trump and the current Senate should make the appointment, according to a recent Washington Post-ABC News poll. An even greater share of independents and women supported waiting.

Some progressives are pushing Mr. Biden to embrace expanding the Supreme Court if Judge Barrett is confirmed. Mondaire Jones, who is expected to be a freshman House Democrat from New York next year, said he plans to introduce the first legislation to do so, and hoped that Mr. Biden had softened his past opposition.

“Like the rest of the world, waiting to see if he has changed his position,” Mr. Jones said.

Mr. Trump has said he wants a new justice seat in case of an Election Day dispute — “I think this will end up before the Supreme Court,” he said of his battle with Mr. Biden — which has raised alarms for Democrats.

The court has already reshaped the fight for the Senate — at least financially — as Democrats saw a sudden infusion of tens of millions of dollars. ActBlue, which processes donations to Democratic candidates and causes online, brought in $280 million in the week from 8 p.m. on the Friday after Justice Ginsburg passed away to the follow Friday; the proceeding week it had seen $122 million in donations.

In that time, Jaime Harrison, the Democratic challenger to Senator Lindsey Graham, the Senate Judiciary Committee chairman, added $15.9 million to his television reservations, according to Advertising Analytics — more than Mr. Graham had spent on his entire 2014 re-election.

”I’m being killed financially,” Mr. Graham pleaded in appearances on Fox News last week, starting early in the morning on “Fox and Friends” and reappearing at night on “Hannity,” asking for donations.

Mr. Fallon said he was focused on what he can control — which is not how Republican senators will ultimately vote. He wants to make the confirmation of Judge Barrett both salient for voters and toxic for the G.O.P.

“If I can keep this move unpopular, I can maximize the chances they feel sufficient pain to move this until after the election,” he said. “I can’t make Mitch McConnell not have 53 votes but I can try to contribute to this move being so unpopular.”

“Then I have at least improved the chances to win the election,” he said, “and that ain’t nothing.”