Rising case counts and stagnant vaccination rates could prove equally frustrating for President Biden and the G.O.P., making it impossible to shift the public’s attention to other priorities. 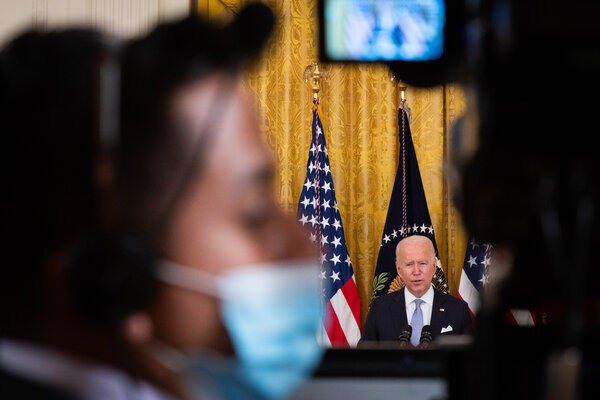 The American political system has come down with a case of long Covid.

In Washington and the states, and in both political parties, expectations that the virus might be routed this summer and make way for some version of political-life-as-usual have abruptly disintegrated. The resurgence of the disease, driven by the fast-spreading Delta variant, threatens to halt plans by both parties to shift their attention to other matters ahead of the midterm elections next year.

President Biden’s hoped-for message that happy days are here again is on hold as the administration’s initially blitzkrieg-like vaccine rollout has slowed to a relative crawl and new debates flare up over public health mandates on inoculation and mask-wearing. There are already fissures in his own party, particularly among labor unions, about how far the government and private businesses should go in requiring employees to take the vaccines.

Even a breakthrough in Senate negotiations this week over a major bipartisan infrastructure deal was crowded in the news by the Centers for Disease Control and Prevention’s reversal of its previous guidance on masking for vaccinated people, and by new vaccine mandates issued by major companies like Google and Facebook and for public employees in states including New York, New Mexico and California.

On Thursday, Mr. Biden took the broadest measures yet to make vaccination or constant testing obligatory for millions of people, including federal workers and military personnel. While he stressed that the country had made great progress since his inauguration in January, Mr. Biden acknowledged that the American escape from the virus had turned into a slog because of the country’s large unvaccinated minority.

“America is divided, between the majority of eligible people who are vaccinated and those who are not,” Mr. Biden said. “And I understand that many of you in the majority are frustrated with the consequences of the failure of the minority to get vaccinated.”

For Mr. Biden’s Republican adversaries, the return of the virus threatens to divert public attention from issues conservatives are eager to campaign on — like crime and inflation — and fix it firmly back on the disease that the Trump administration mishandled with catastrophic consequences.

Hostility to basic mitigation measures among conservative voters and politicians has impeded efforts to contain the virus from the start, and the states where vaccination rates are lowest and new outbreaks are strongest are almost uniformly Republican-leaning. A drawn-out plague disproportionately afflicting red-state America could become an embarrassment for the G.O.P. even as anti-government language on matters of public health becomes an increasingly central strain of Republican messaging.