So far, President Biden has made only a passing comment on the crises that have engulfed Gov. Andrew M. Cuomo, and he seems to be hoping to avoid getting pulled in any further.

But as a longtime friend of the New York governor, Mr. Biden is one of the very few people in the nation with the potential to prevent a protracted standoff between an increasingly isolated Mr. Cuomo and the rest of the Democratic Party. That has strained Mr. Biden’s efforts to stay firmly on the sidelines as the governor faces a fusillade of calls to resign.

Mr. Cuomo is confronting a spiraling set of allegations and investigations involving sexual harassment, a toxic workplace, the manipulation of the number of deaths at New York nursing homes and perceived loyalty tests from the governor’s vaccine czar.

Mr. Biden and Mr. Cuomo have not spoken, people close to both men said. Asked on Sunday night whether Mr. Cuomo should resign, Mr. Biden said only, “I think the investigation is underway, and we should see what it brings us.”

The governor and his allies have urged people to wait for the results of the investigations to buy time, in the hope of stabilizing Mr. Cuomo’s support. And Mr. Biden appears inclined to give him that time — at least for now.

But a prolonged period of intraparty sparring over Mr. Cuomo’s future could be problematic for Mr. Biden. It threatens to distract from his early initiatives, including mass vaccination efforts and his party’s imperative to sell the public on the nearly $2 trillion stimulus package Mr. Biden signed into law last week.

The New York Times and Washington Post reported over the weekend that Larry Schwartz, the governor’s vaccine czar and a longtime lieutenant, had tried to assess the loyalty of county executives to Mr. Cuomo during phone calls about vaccine distribution — drawing particular attention at the White House on Monday.

Jen Psaki, the White House press secretary, said that the reports were “concerning” and that Mr. Schwartz’s calls were “inappropriate reported behavior.”

The calls prompted one executive to file a preliminary complaint with the state attorney general office’s public integrity bureau. Mr. Schwartz denied that he discussed vaccines in a political context.

Ms. Psaki insisted there were “checks” in the system to prevent the vaccine from being distributed based on favoritism.

On Tuesday, the White House will hold its weekly call on the coronavirus with the National Governors Association, which Mr. Cuomo typically leads as chairman of the group. Ms. Psaki said she expected Mr. Cuomo would join the call, adding, “We’ll leave that up to him.”

Both of New York’s senators, Chuck Schumer and Kirsten Gillibrand, called on Mr. Cuomo to resign last Friday, along with most of the state’s Democratic congressional delegation. One factor in the timing for members of Congress who made their announcements in quick succession was the desire not to overshadow Mr. Biden’s signing of the pandemic relief package, according to people involved in the discussions.

Mr. Cuomo was surprised by the statement from Ms. Gillibrand and Mr. Schumer; he had believed earlier that day that they would not join the calls against him, according to someone familiar with his thinking.

Still, the governor has flatly refused to contemplate resignation while questioning the motives of the women who have accused him of sexual harassment, invoking “cancel culture,” a favorite Republican talking point, as he dug in on Friday.

“There’s a job to do, and New Yorkers elected the governor to do it,” Richard Azzopardi, a senior adviser to Mr. Cuomo, said Monday. “He remains focused on vaccine distribution and a state budget that’s due in two weeks, and we’re thankful for the help that the White House has provided on both those fronts.”

During the presidential campaign, Mr. Biden successfully avoided getting dragged into controversies that didn’t directly relate to him. But the bullying behavior Mr. Cuomo is accused of is contrary to the standard Mr. Biden has set for his own White House.

There are two investigations into the sexual harassment allegations against Mr. Cuomo, one overseen by the state attorney general’s office and another by the State Assembly.

Mr. Biden and Mr. Cuomo have taken different paths when accused of inappropriate conduct. When Mr. Biden in 2020 was accused of sexual assault by a woman who had worked in his Senate office decades earlier, he denied her allegation but did not impugn her motives. Mr. Cuomo has questioned the motivations of some of his accusers.

A senior administration official said Mr. Biden’s desire to stay away is driven partly by his personal relationship with Mr. Cuomo and partly by pragmatism. 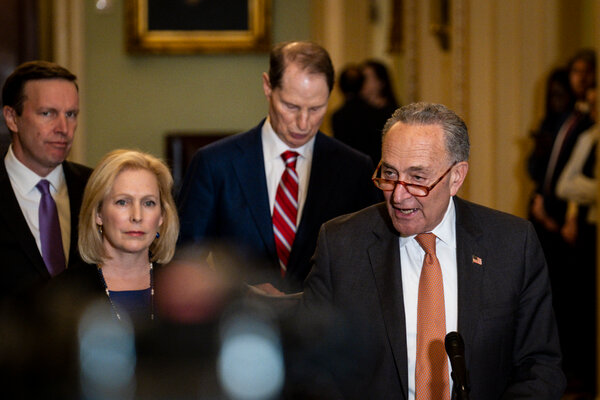 Should he eventually become drawn into the issue, Mr. Biden’s options range from encouraging Mr. Cuomo to resign to asking him not to run for office again in 2022, as the governor has indicated he still plans to do.

“Biden has a long friendship with Cuomo, and I think he and [Nancy] Pelosi and others are clearly hoping the situation will resolve itself through this investigative process, and they’re giving him that much leash, but how tenable that will be over time is very questionable,” said David Axelrod, a former senior adviser to President Barack Obama.

While it would be an extraordinary move for Mr. Biden to intervene, there is precedent for a Democratic president wading into a messy situation involving a New York governor of his own party. In 2009, Mr. Obama delivered a message through intermediaries to then-Gov. David Paterson that he wanted him not to run for another term the following year.

Mr. Paterson, mired in constant controversy, had become an unwanted distraction for the Obama administration; he soon announced he would not run again, opening the way for Mr. Cuomo to run in 2010.

But there was a significant difference between Mr. Paterson and Mr. Cuomo: Mr. Paterson’s poll numbers were dismal, at 21 percent approval in June 2009, and threatened the Democrats’ hold on a seat that a Republican, George Pataki, had held for three terms, until 2006.

Mr. Cuomo has much stronger support from his constituents. A new Siena College poll on Monday showed that only 35 percent of New York voters want Mr. Cuomo to resign immediately (and only 25 percent of Democrats), though the survey was taken mostly before the wave of congressional demands for him to quit.