Brexit negotiators should finalise their talks with the EU next week, as they work to put a deal in place and avoid a no-deal exit. Officials remain concerned about the potential ramifications of leaving the bloc without clear guidelines around their formal relationship, especially amid a pandemic. Britain risks being left out in the cold without a US or EU deal, impacting an already damaged economy.

The way UK officials react going forward will have a profound effect on the country’s relationship with President-Elect Joe Biden.

Mr Biden will take office in the US on January 20, and experts believe he will work towards a closer relationship with the EU.

Professor Julian Beer, Deputy Vice-Chancellor of Birmingham City University and President of the Greater Birmingham Transatlantic Chamber of Commerce, revealed this could alter the “special relationship”.

Writing in an opinion piece for the Greater Birmingham Chamber of Commerce, Professor Beer said Mr Biden’s administration could create a “tripartite” relationship between the US, EU and UK.” 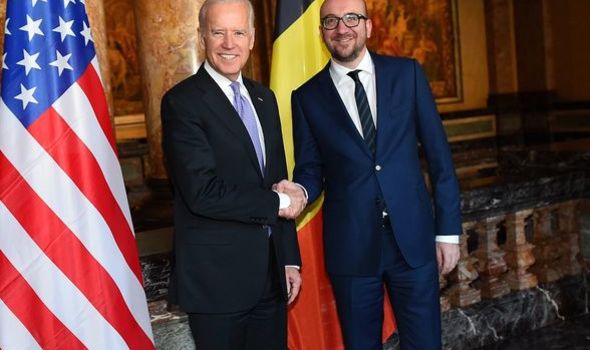 “In doing so he will be focussed I am sure, on repairing US relationships with Germany and France and the rest of the EU as a priority.”

Speaking to Express.co.uk, Professor Beer expanded on his analysis, adding Mr Biden’s transition administration could look to enshrine the relationship in a new type of deal.

But he added the president would take different approaches with trade and advice.”

He said: “The transition administration’s negotiators in the US may take this approach to any trade deal with the UK.

“But, as Biden is a seasoned politician unlike Trump he is likely to encourage trade through our UK/US negotiations and advice through the UK/EU negotiations.”

Professor Beer also said Mr Biden is aware he needs to cement a deal with both the EU and the UK, but with the UK currently exiting the EU’s agreement, the country will become the “errant sibling”.

He added: “Biden is also a realist and knows that he also needs a deal with both the EU and UK.”

“The EU do not need a deal with the US as they already have one. The errant sibling is the UK.”

To avoid fulfilling Professor Beer’s prophecy, the UK will need to establish a deal with the US.

Such a deal would have a “profound negative impact on health, welfare and the environment” according to the Trade Justice Movement, either positive or negative.

But it could be some time until officials strike up a workable transatlantic plan.

Boris Johnson endangered the UK’s future relationship with a Biden administration before he took office, as MPs passed the controversial Internal Market Bill.

The bill, in effect, would allow the UK to row back on its promises made about the border in Northern Ireland and could establish a solid boundary between the north and south.

Doing so would violate the Good Friday Agreement, something Mr Biden, who is famously proud of his Irish ancestry, has warned the British Government against.

In a tweet, he said any trade deal between the US and UK “must be contingent upon respect for the Agreement and preventing the return of a hard border”, pouring cold water on prospects of transatlantic trade.