The French President has been strongly opposed to the EU offering Britain any significant concessions during the negotiations. He has been particularly tough on fishing rights, which has proved a major hurdle in the talks. Mr Macron is understood to be happy with a no deal outcome, but insiders have warned such a stance would be a huge mistake.

UK sources believe Mr Macron is willing to accept a no deal Brexit for his own political purposes, with the French Presidential election looming.

He hopes his tough stance in the negotiations will give him a boost in the polls.

The French politician also believes the UK will end up coming back to the negotiating table in the New Year as a no deal will prove particularly chaotic for Britain.

But a source close to the talks has insisted such an opinion is a huge miscalculation by the French President. 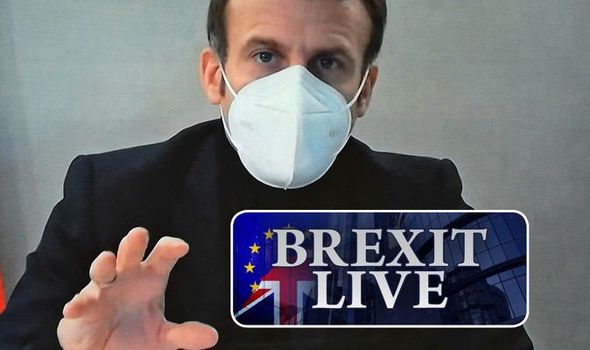 They told the Sunday Times: “If he, Macron, thinks that, he’s making a miscalculation of historic proportions. We cannot accept a deal that doesn’t leave us in charge of our own waters.”

The two sides have yet to break the impasse ahead of the transition period ending on December 31.

Talks are continuing in Brussels this weekend but UK sources say it is increasingly likely that an agreement will not be reached in time.

A Government source said there will not be a deal unless there is a “substantial shift” from Brussels in the coming days.

The European Parliament has said there must be a deal by Sunday evening to allow time for it to be ratified before the end of the transition period.