Fishing rights remain a contentious issue across Europe, despite the post-Brexit trade deal being agreed by both sides late last year. German fishermen are particularly enraged by the terms of the treaty, as several trawlers remain unable to go to sea and others are facing significantly longer journey times.

The large trawlers of the Deutsche Fischfang Union (DFU) in Cuxhaven and Doggerbank Seefischerei GmbH in Bremerhaven may have to stay in port for weeks because the EU’s fishing agreements with Norway and Greenland are still pending as a result of the Brexit deal.

The talks between the two other countries stalled as Brussels focused on securing a deal with the UK.

German fishing chiefs are not convinced fresh agreements will be made before the end of the month, causing significant problems for their fleets.

Haraldur Gretarsson, managing director of DFU, describes the situation as “a mess” as two of the newly built trawlers have been stuck at the port since December 20 and 26.

The fishing boss said he is unsure when the ships can sail again. 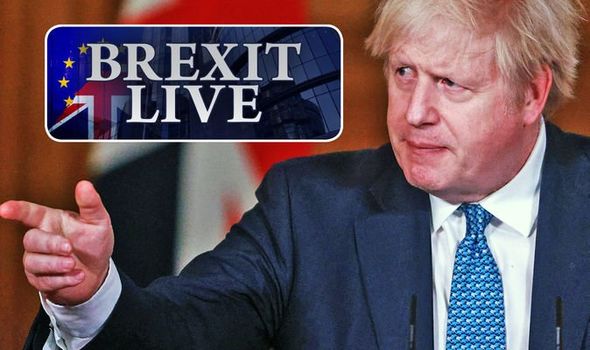 The Cuxhaven Kutterfisch is also affected by the Brexit deal, as talks with Norway are yet to conclude.

As a result, Kai-Arne Schmidt, managing director of the group, said his trawl fleet are having their journey times trebled to about 60hour as they are currently not allowed to fish below Norway.

He said the trawlers are having to travel significant distances to the Shetland Islands in order to stay in business.

Mr Schmidt said: “We have to see how we can best navigate these turbulent times.”

He added that the effects of the Brexit deal may prompt a downsize in his trawlers.

He said: “We are now losing 12 percent of the quota for saithe and 19 percent for cod. If nothing changes, we will have to decommission a ship in five years at the latest.”