During their video summit on Thursday, EU leaders were provided with an update on the progress being made in Brexit negotiations with Britain. But with just six weeks until the end of the transition period between the two sides, Belgian Prime Minister Alexander De Croo has urged Brussels to step up contingency planning for a no deal Brexit. He said: “We can’t keep hoping for a good outcome. There might be one, but hoping alone is not enough. We have to start our contingency planning.

Mr De Croo also warned Belgium, France and the Netherlands would be some of the EU member states most impacted by Brexit.

Dutch Prime Minister Mr Rutte told a press conference: “Together with a few other countries, I now insisted, in parallel with the negotiations, on more clarity from the Commission about their proposal about European contingency measures.

An official for Mr Macron’s office said the French President “talked about Brexit contingency planning in his introduction then moved on to COVID. He mentions it regularly.” 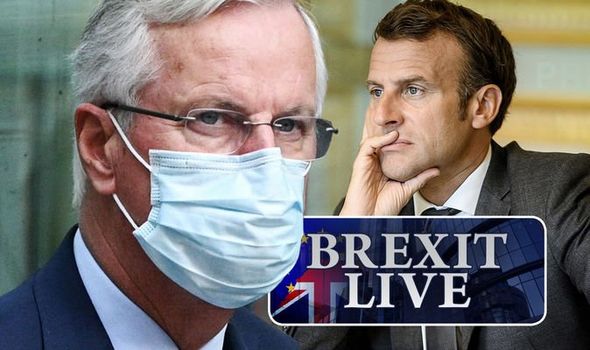 Another EU official also confirmed Mr Macron had asked for no-deal preparations to be ramped up, according to Politico.

The European Commission has so far remained tight-lipped about its no-deal contingency plans, as many believe this could indicate to the UK that Brussels has lost faith in negotiations.

These latest warnings come as direct Brexit talks were suspended after a member of the EU team tested positive for coronavirus.

Both negotiating teams are now working remotely in a final effort to clinch a post-Brexit trade deal that would come into force on January 1, 2021.