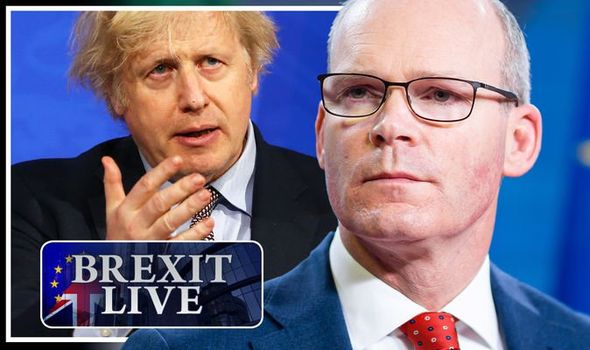 Britain and the EU signed the Trade and Co-operation Agreement (TCA) on Christmas Eve following nearly a year of intense negotiations, which set out trading arrangements that came into place from January 1. MEPs on the European Parliament’s trade and foreign affairs committees gave their consent to the deal on Thursday, raising hope of a possible improvement in strained relations between the two sides over Northern Ireland. But after weeks of delays, the TCA has still not been formally ratified, with group leaders in the European Parliament refusing to set a date for a final vote.

The provisional application for the deal is due to expire at the end of April, and the UK has repeatedly warned it expects the EU to complete its ratification process by then.

The protocol is designed to prevent a hard border with Ireland and after Brexit has seen the North remain part of the single market for goods, resulting in products arriving from Britain being subject to EU import regulations.

London has already infuriated Brussels by unilaterally deciding to extend grace periods to help retailers in Northern Ireland struggling with supplies, meaning the checks meant to be in place after Brexit are not yet in place.

Ireland’s foreign minister told Irish broadcaster RTE: “We need to talk seriously about how the protocol is being managed, how it can be implemented in a way that listens to the concerns many in Northern Ireland have and what flexibilities are possible.”

Andreas Schieder, who led the European Parliament foreign affairs committee’s work on the UK-EU deal, warned: “Brexit is a historic mistake, but now we need to establish a strong fundament for future relations.”

He also warned “all progress could be lost, if the UK continues to unilaterally breach the Withdrawal Agreement and the Protocol on Northern Ireland”

He travelled to Brussels for diplomatic talks with European Commission counterpart Maros Sefcovic in a bid to end the row over border checks and defuse tensions in the region.

Over dinner at the EU’s Berlaymont HQ, the pair discussed plans to implement the post-Brexit border deal to minimise the risk of future flare-ups of violent disruptions.

Sources on both sides said they were keen to find a way to cool tensions in Northern Ireland after rioting broke out over the long Easter weekend.

The Northern Ireland Protocol has been blamed as one of the factors behind the recent violence amid concerns from Unionists it undermines their place in the UK.

UK and EU officials have been locked in intensive talks for several weeks over possible solutions to minimise the number of customs checks on goods being shipped to the region from mainland Britain.

Lord Frost and Mr Sefcovic’s intervention was said to be to inject a “political steer” into future wrangling over plans to avoid a hard border.

The pair also discussed the EU’s ongoing legal action against Downing Street for breaching the terms of the protocol.